So for those of you who Dr. Luigi could not bait into his 'surgery' first time round on Wii U, not sure if you could trust him? needed a second opinion? Well Nintendo's latest offer on this Wii U eShop title is for you:. 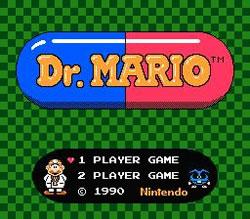 Nintendo UK's description of Dr. Luigi.
Armed with plenty of multi-coloured, two-part capsules, help Dr. Luigi clear a bottle infested with nasty viruses. Annihilate the nuisances by dropping pills of the same colour next to or on top of them – create a horizontal or vertical line of four or more like-coloured pieces and they’ll disappear. Empty the whole bottle to move on to tougher challenges – but if it fills to the brim, the viruses win!

So if anyone was unsure which of the Mario Bros they'd like to be their doctor most, that difficult decision has now been removed from you, as they both stand ready to plunge what ails you out of your system.