Captain Toad: Treasure Tracker for Wii U - The Adventure so far
Login

Captain Toad: Treasure Tracker for Wii U - The Adventure so far 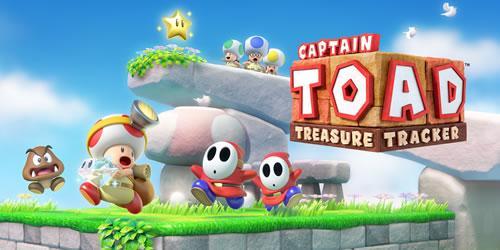 Captain Toad: Treasure Tracker for Wii U: Well its been time for adventure for a while for Captain Toad & Toadette, especially if you live in Japan or North America where it came out in November/December respectively, but now Captain Toad has finally finished taking a stranglehold of the world with the game released globally when Aus and the EU bought up the rear on the 3rd and 2nd of January 2015! The game has been getting pretty good reviews from major sites such as IGN who scored it 8.2 out of 10, and Metacritic who weighed in with a very respectable 4 out of 5 overall score.

If you haven't committed to aiding the good Captain on his adventures yet - perhaps checking out our coverage of the Wii U's latest first party title might help?

Our brief editorial review of the adventures so far!

Captain Toad’s Treasure Tracker is the biggest surprise from Nintendo this year. The game is a spinoff from the Captain Toad levels in Super Mario 3D World and these levels have enough depth to create an entirely new game. Captain Toad navigates through puzzles and enemies with nothing but his head lamp. Without the ability to jump, you have to use your ingenuity to pass enemies and obstacles. Every gamer who plays Captain Toad describes it with just one word, “Charming”. Captain Toad is wondrous and joyful for Nintendo fans of all ages.

The graphics and mechanics of the game feel familiar for gamers who played through Super Mario 3D World. You have a 3D perspective that is controlled by rotating the gamepad or the right analog stick. It makes great use of the gamepad again having you use touch controls, blowing on the gamepad, and even shooting turnips in a first person perspective. Puzzles can be beaten in multiple ways and levels have a lot depth. But it’s not all just puzzles. The game is still dynamic as there are faster paced levels and challenging bosses.

This game is easy to pickup, but it’s also deep for completionists. Each level is completed by attaining the gold star. There are three gems within each level which you will also need to unlock subsequent levels. There’s also a unique challenge for each level. These range from beating the level without defeating any enemies to beating the level with a limited number of touches on the gamepad. In addition, there are hidden gold mushrooms which are very hard to find. You will be re-running the levels multiple times.

Captain Toad’s Treasure Tracker is definitely a unique adventure and a good break from some of the competitive multiplayer games released this year such as Mario Kart 8 and Super Smash Bros. I highly recommend Captain Toad if you enjoyed Super Mario 3D World.

How have you guys found Captain Toad's (and Toadettes) adventures so far? what did you make of the ending? (if you saw it yet, trying not to spoiler it!)