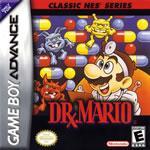 "Hey Doc, I'm a little short this week, but desperate for a hit."

Ah yes, I remember thee quite fondly. It was a brief 19 years ago give or take whenever you've decided to read this review that I, then a fine lad of 8 years old stumbled upon an NES game called Dr. Mario. However this wasn't the typical Mario that I was used to mushing turtles with, rather he was a Dr. fighting viruses in his brand new puzzle game. Me being the inquisitive young violent tyke found little time to play such a game where stomping, punching, or shooting wasn't involved.

Years and years later I stumbled upon this game once again in the format of the Gameboy Advance Classic NES Series version. Now that I'm older, and supposedly wiser I can see the foolishness that is youth. Now I'm a sucker for classic gaming. I tend to feel that anything released passed the SNES era is flash first and substance later. So once Nintendo started to release some of their classic NES games for the GB Advance I took notice with my wallet and my thumbs.

Graphically Dr. Mario on the GBA is just as it was for the classic Nintendo Entertainment System. What's even better is that it plays the same and as far as I can tell sounds the same as well.

The game as I said earlier is a puzzle game where you use different colors and combinations of pills that Dr. Mario throws to fight off viruses. There are three types of viruses, yellow, blue, and red. To kill a virus you have to move 3 of the same colored pills on top of the bad little dudes. Once all of the viruses are destroyed you move on to a harder level. The nice thing about the game is that it allows you to choose the level you would like to start off at, with what speed, and number of viruses. The menu even lets you choose one of two songs (or no song) to jam to while you play.

This is not the deepest puzzle game out there, but it's fun and holds true to its classic roots. Like most of the Classic NES Series this game is perfect for killing a short amount of time while say you're on the can, or, you're at the clinic trying to get rid of a virus of your own. I bought this game specifically because I knew it was fun and I wanted the Classic NES version. Be aware that if you're not a geek like me that wants the definitive classic 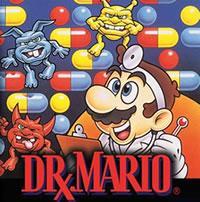 version that there is a Dr. Mario / Puzzle League combo game cartridge that is available for the GBA as well. It's two games for the price of one and usually seems cheaper on ebay. I've never played it though so don't know if it's better or worse than this game. However I do know that this game is fun, and I'm glad I bought it.