So... what is Super Mario CG? The short story

It's a fan-made short animated series, early in development, with a lot of dedication to bringing back what made the Mario series so good to begin with.


Lately Nintendo has lost sight of what made the series so inventive and inspired, that's what I plan to bring back. Mario games have had a big impact on my life, so much more so than any other series, let alone anything else really. I cherish this franchise, it was my childhood as much as it was yours.. but with the lack inventiveness in the more recent Mario titles on Wii U, I felt obligated to return to my nostalgia vault, and sort through and find out what made it so great, and what could make it that much better. This is Super Mario CG.

Like the sound of this project? the longer story is below!

If it's any consolation.. to me, don't be put off by what seems to be my young age.. well, I mean you could say I'm young. Seventeen; High school, I assure you I am a deep and thoughtful person.. despite what I've made myself out to be on the internet.

Well, it all started with a life story, but instead I'll just show you my early progress to present day early progress. (I'll try and squeeze in whatever I can.)

*Insert life story* I wanted to be an animator but found it exceedingly difficult, I order to begin I'd need some source material to start out with. After a few years of digging through the internet I found a program that would allow me to extract game models from various Mario games and Import them into my 3D animating studio. 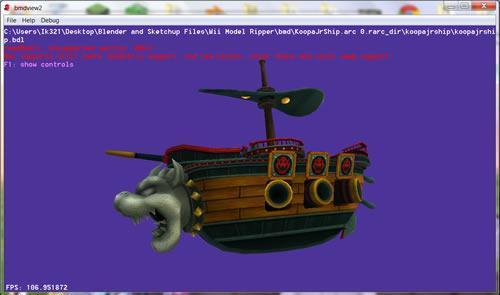 What I called, step zero.

Of course, I had a basic knowledge of programming and animating, but I could not use their bone meshes from the games to animate them here, so, I have to do it all manually.

After a few months of sorting through files, I was able to.. well, sort them, and could easily tell what models they were.. because, you know, company game developers give those files some weird names. Using a few models I ripped, and quickly throwing something together over the course of a few hours, I did a short story board test to test the lighting, camera functionality, and how the models looked in this new depth of field.

In this short test I was still trying to figure out how to rig the propellers, so instead of that I had to move them each manually, like a stop motion. Just as tedious, but not at all the same.

Shortly after I made another failed attempt at rigging a propeller, but the scene was so beautiful that I decided to animate it anyway. 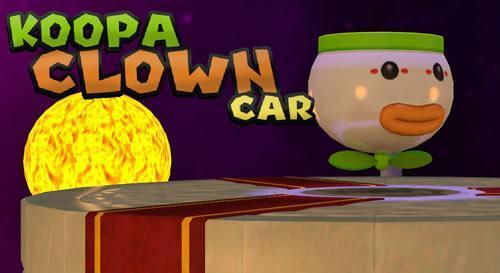 It really was to test texture animation, with the suns in the background. ..also lighting again.

I than moved on to character rigging.. then this happened.

lol After that, I began working out how to extract models from New Super Mario Bros Wii (as it's the hardest game to extract from,) I finally cracked what I found to be the only method, and little good came of it. Of course, the UVs (texture maps,) don't work, so, I have to completely re-texture the models when extracting from NSMBW.

Until this point, I only needed to do a few models, but then, I extracted one of the biggest projects of my life.. Bowser's Thrown Ship.

THIS thing was a real piece of work, I'll tell you what. SO frustrating!
"> 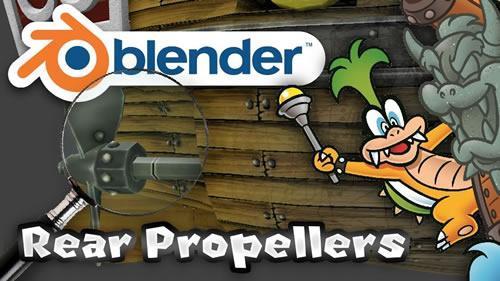 There are four videos documenting some of the work, amounting to around a complete time of 11 hours, including off-camera time. This wasn't something I got done in a day though, this was something I worked on for a few weeks, a few hours at a time, and let me tell you, it is SO frustratingly tedious.

But, of course, I got it to a point where I was happy with the results, and decided this was the model I was going to rig. About a month went into this project. The past ones leading up to this ran the course of about three. This animation test was actually planned from the beginning, since the original storyboard demo. It just took so long to get to this point that the project slew into multiple others. Well, here it is, the milestone of my early career, a successful Airship Rig. 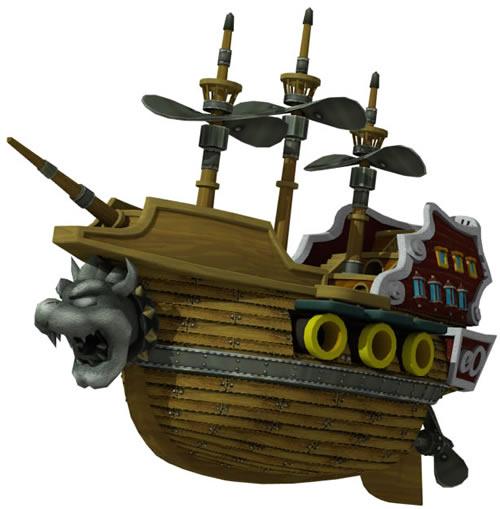 I also decided to kill to birds with one stone and make an intro out of it. So far, not really any praise, but I plan on doing something a bit more Mario related with it later.

I also did another texture animation test with some after effects.. looks good in my opinion. 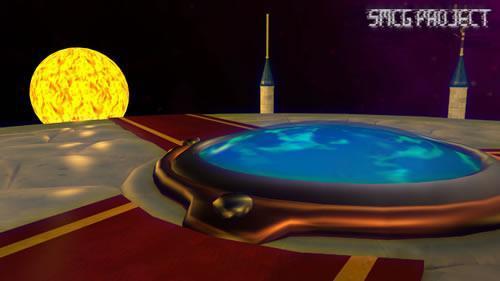 Now we move on to the sort-of-present-day..

After all these test videos, most of which seemed half-baked, incomplete, and basically overall not getting any attention whatsoever.

I then filmed a bunch of gameplay videos with my best friend, just so I could relax a bit and still keep the channel active, while still working on the project in the background.

During that time I learned TONS more about modeling, and set design, (most of which alone,) than I did previously with all the work I was doing.

Though not an example of this, here's a photo made at the time used to test various visual effects done post-render. 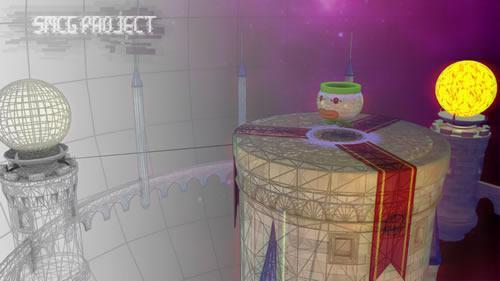 Remember when I said I was now able to extract models from NSMBW? Well, that's were this comes in. I needed a set, so I decided to build one, but I needed a castle, even if it is just a placeholder. So I got one from NSMBW, and imported it into blender. Of course, the UVs didn't work and I had to do it all myself. Here's the earliest photo I have.. not from the very beginning per say, but the first one I took. 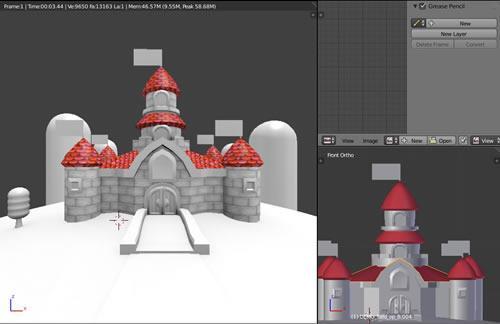 In the photo, I just applied the bricks.. which were somewhat easy, and then began on the roof.. that sucked.

The story gets fairly simple from here. Working, Working, PROGRESS! This is where the custom stuff comes in to play.

My favorite part of the Peach Castle re-development had to have been the flags.

The model from NSMBW used the same flag design from SM64 on all five towers, but in Galaxy, it had a more intricate design.
I didn't like the design in NSMBW, but the galaxy flag was strictly made for the cutscene and did not exist in the game.

So I decided to make one. Early designs looked horrible. 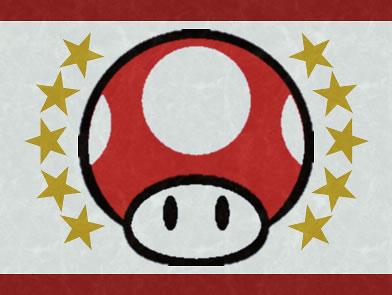 But I finally set my heart on a design. A hearkening back to the 8-bit era. 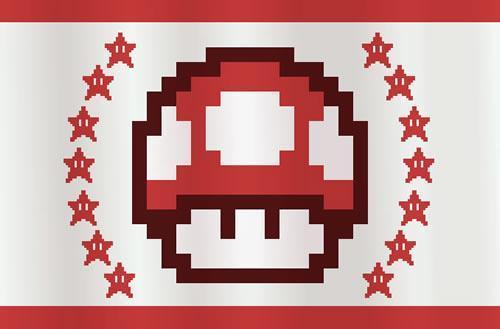 I made the color scheme to closer match the other flags

yet stand out a national symbol for the Mushroom Kingdom.

And of course now, these last few days, I've been at work, re-creating the Mushroom Kingdom as we saw it, in the days of Mario 64 and Paper Mario.

After the flag, I began working on an exterior wall.. you know, for protection? At first just a thought, but it turned out really nice. 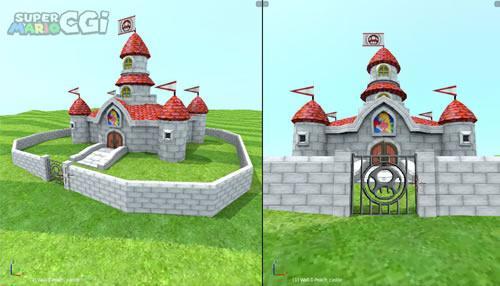 Shortly after.. like pretty much instantly, I began on the moat.. which is pretty self explanatory, you were there, you know what happened right? 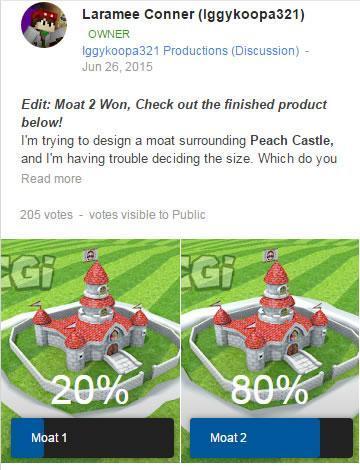 And of course, the result of the poll. 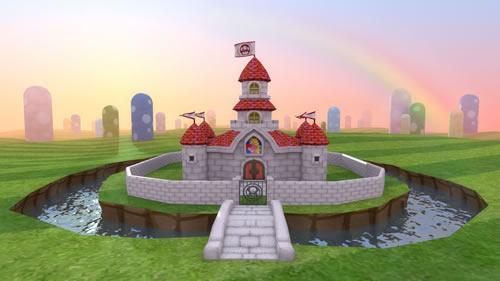 And well.. that's about it.
Not much else to say, the project is still in early development. Though much is planned, I don't want to give it all away, that'd spoil the surprise.

But I still have some new screenshots taken shortly after the events of the poll. 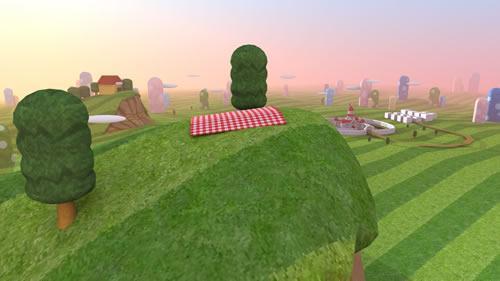 Like I said, it was, and still is in early development. I may look for future outside help, but right now I want to go about it leisurely, letting the ideas flow into my head without pressure amongst fellow peers. This project is huge, not some comedic knock-off in source film maker *fyi, I love those, just making a point,* it's going to have story, action, adventure, PLOT! Things we haven't seen done right in ages. Right now I'm working on the Mushroom Kingdom, what could follow?

When the first episode airs, it will be more of a short pilot than a complete series. Once word gets out I'll look for more professional help, most likely volunteers, who can help with modelling and in-engine effects.

Welp, I think that's about all there is for now. I work on this project nearly every day, and have been, since the very beginning.. 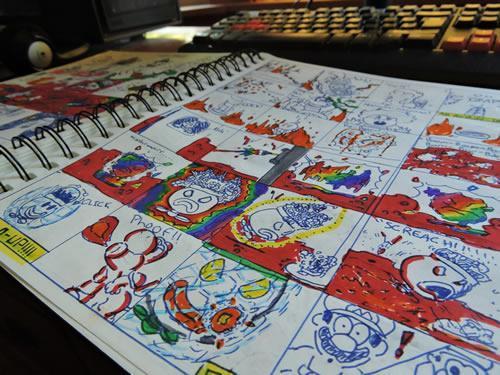 A Comic I drew back when I was fourteen. It didn't start off as a good art-piece, but I really treasure those moments drawing these comics.