Mario and Aesops: Two Things That Should Never Meet
Login

Mario and Aesops: Two Things That Should Never Meet

***
gplus
Digg
Gshare
Reddit
facebook
Pin It
twitter
If there's one thing the horrors of Captain Planet should have taught us, it's that shoehorning moral messages in entertainment is often a bad idea. So you'd think the Mario series, what with Nintendo having the common sense not to follow their competitors, wouldn't try any of this, right?

Wrong. With Super Mario Sunshine, the educational games and Super Paper Mario, among others, Nintendo tried to force in badly done moral messages, also known as aesops from the TV Tropes entry, into their games.

This wouldn't be a bad idea, if they were subtle messages. Remember Donkey Kong Country? That series had quite a bit of arguably pro environment meaning behind it, what with the grim portrayal of areas like Kremkroc Industries or Mekanos. Want to make someone not want to chop down trees? Make them get 100% on Ripsaw Rage. Want to make someone think twice about putting business first for everything? Show them Frantic Factory or Smithy's Factory from Super Mario RPG.

Number one reason against deforestation: to avoid getting cut in half by an enormous forest sized saw!

However, then we got the games mentioned in th second paragraph, with all the discreetness in the message of a badly done 90s kids movie. Super Mario Sunshine was a fantastic game, but it's plot showed fairly well why no one had before thought 'game starring cleaner' was a good idea.

It starts off plain ridiculous, with Mario being mistaken for a version of himself who's bright blue and made of sentinent water/paint. Getting a sentinent water gun called FLUDD almost seems completely reasonable after this.

But the issue here, is that the message doesn't work. Super Mario Sunshine is a great Super Mario 64 type 3D platformer, but as a rule of thumb, the worst missions are the ones included to try and push the green aesop. No, cleaning up Sirena Beach isn't fun. Nor is cleaning up the Piantas drowned in paint in Pianta Village, or getting to the centre of a village turned in Lethal Lava Land 2.0 by highly flammable magic paint without FLUDD.

Fair enough. But then we come into all the big plot issues.

For example, taking Shine Sprites and polluting Isle Delfino causes the sun to lose power over the island. Or something. Pretty interesting excuse for a pro green message, but kinda falls flat when you consider every single NPC in the game is an utter hypocrite. How many have Blue Coins? What of the guy with 24 Shine Sprites stashed away in a shop who's selling them for coins? What of all the people giving you them for completing tasks? Why is Mario the only person who gets blamed for the fault of pretty much half the cast and their greed? God the police are useless on this island. 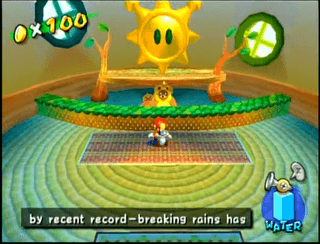 But then, you have Eely Mouth. Just Eely Mouth. The whole thing is basically the most patently ridiculous example of a moral crammed into a level. I mean, yes, brushing your teeth is important, but did you have to make four levels out of eight in Noki Bay lead up to this little message? Thoughts about the stupidity of the boss battle aside, it's probably the most insane example of a space whale aesop known to man... or the worst parody of one.

Sure, teeth brushing is serious, but portraying it as something that can pollute an entire bay with deadly purple acid is just not going to be a particularly persuasive way of getting your message across.

Well, that and you can almost see this is coming back to bite Nintendo. Here kids, you can get dental help from someone who has no dental surgeon training in the slightest! All hail illegal dentists! 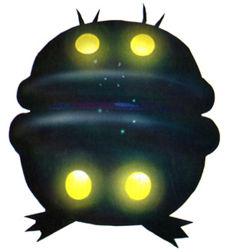 On the bright side, one of the Mario Golf games says Eely Mouth plays golf. Don't think about it too much.

But was this the only example of a silly message being put into a Mario game? Well no, the educational games were plain ridiculous. Mario Teaches Typing 2 probably took the cake though:

And then there was Mario is Missing, which was either a poorly disguised green aesop or an almost hilarious chilling coincidence. Note the plot, as taken from Mario Wiki:

Bowser decides to flood the Earth using hairdryers from Hafta Havit Mail-Order to melt Antarctica. In order to buy the hairdryers, Bowser has his Koopa Troopas travel all over the world and steal various important landmarks that he plans to sell.

Yeah, Bowser is selling landmarks for hairdryers. Apparently Nintendo thinks Bowser should be a slightly more pro active version of Arthur Furguson, and he's kinda putting the Brookyln Bridge sale scam into actual in a bit more of a lieral way. It's time like this when you think even fan fiction can have a better plotline.

Finally though, you've got Super Paper Mario. I'll make no excuses here, the game had a fantastic plot line, except the following part. It was interesting, had well thought of characters and villains, but Intelligent Systems just needed to put a message in somewhere about the environment. 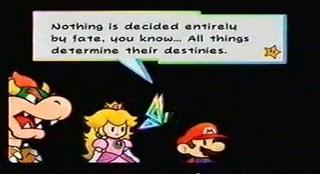 What, the message against fatalism saying how people can choose their own futures wasn't good enough? Sigh, from a existentialist message in the vein of the works of Sartre to something straight out of Captain Planet.

The chapter in question is the fifth one. Yeah, something about intelligent cavemen called Cragnons and intelligent flower creatures called Floro Sapiens. You can almost tell the sense in which it's meant to refer to present day Earth rather than the past.

Plants trying to mind control human like creatures because of environment damage? Oh great, it's basically the Mario version of The Happening, except M Night Shyamalan got rightfully torn to shreds by the critics for the latter. Funny how two very different people could come up with the same bad idea.

But other than just being a cheesy, completely irrelevant idea thrown into a game where it doesn't add anything to the story, it's rather a bad message because of the context. Really, some lunatic called Count Bleck is destroy all of reality and your universe is about an hour way from total oblivion and you go ranting on about the environment? How is this relevant to Mario's quest?

It's a bit like bringing up the environment during world war 3. Nobody should honestly be caring about it when the planet is potentially hours away from complete destruction. I'd love to say that line from the The Simpsons here. You know, the one from the telephone number changes one which Homer says to the badger:

Go away! We have bigger problems now!

Except to the near irrelevant cavemen and plant people. What's worse to you, an environment where a few species have died or become endangered, or a universe which has become a blank white void with no matter or life in it whatsoever in complete silence? It's a bit like if the ending of a Doctor Who season finale had some raving environmentalist appear and go on about saving the whales. It's not necesary, and should be cut.

Above: Makes a bunch of melted ice caps and glaciers seem reasonably like a good thing in comparison.

On the bright side, Super Mario 64 played this kind of thing for laughs with the Whomp King, and that was awesome.

It makes me so mad! We build your houses, your castles. We pave your roads, and still you walk over us. Do you ever say thank you? No! Well, you're not going to wipe your feet on me! I think I'll crush you just for fun! Do you have a problem with that?

In conclusion, Nintendo really should cut the irrelevant little moral messages (especially ones about saving the environment) from their games, or make them more discreet and in the background. Although considering they brought back the crappy gimmick of blowing up rubbish in both Super Mario Galaxy games, it seems someone in Nintendo likes these pointless things.