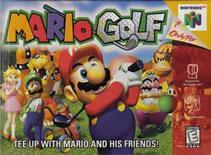 As I've gotten a little older, I've come to appreciate the sport of golf. I'm pretty sure that's the first sign of becoming elderly, but what can I say? Golf is an interesting game. And if being a senior citizen is half as fun as Nintendo's 'Mario Golf,' well, I say: bring on the bingo tournaments and hiked-up pants!

At first glance, 'Mario Golf' looks like a kid's game, concerned more with colorful Nintendo mascots than providing a realistic golf simulation. But thanks to Nintendo's quality control and the skilled development veterans of Camelot, this turned out to be the finest golf game I've ever played. And the presence of Mario and his crew just adds to the fun.

The purpose of 'Mario Golf' is to, well, play golf. You and up to four friends can play on one of six courses to see who can finish with the fewest strokes. There's also a skins option, where you try to win the most number of holes. Since the only way to win a hole is by using the fewest strokes, it leads to some exciting risk-taking as you try to shave off a shot or two on your approach. 'Mario Golf' is a great, slow-paced multiplayer experience, perfect for a few beers and shooting the breeze with the guys. 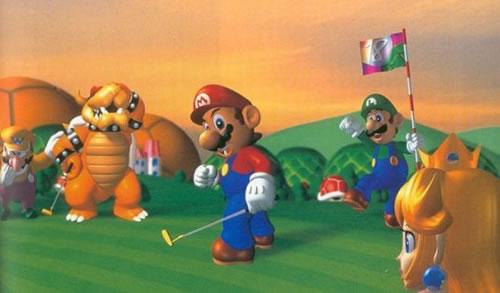 There's a lot to enjoy in single-player mode, too. You can play out a tournament on any of the six courses, and if you earn first place, you'll get a trophy, and tons of experience points that can go towards unlocking the later courses. And for variety's sake, you can play through the Ring Shot mode, where you have to get par on a hole AND put the ball through all of the scattered rings on the course. And if that's not enough, you can unearth other golfers in Get Character mode. Needless to say, golfing fans (or video game fans in general) will have plenty of stuff to do in 'Mario Golf.'

The game, as the cliche goes, is 'easy to learn, and hard to master.' You can choose from an interesting variety of characters, including some reasonably professional-looking folks like Plum and Harry, or some of the the Mario gang, like Yoshi, Wario, or Luigi. Each golfer has their own driving distance, shot height, and draw/fade; as a general rule, the longer-driving golfers have nastier draws or fades, so aiming their shots can be much trickier than it is with the straight-on shooters. If 'Mario Golf' has any flaws, it's in the character variety. Once Maple is unlocked, there's little point in choosing Peach, Charlie, Plum, Yoshi, or any of the weaker drivers, since Maple hits the ball straight-on with a longer drive than any of them. Still, there's a nice variety of big-driving characters to choose from once you've unlocked them all, and expert players will enjoy the extra challenge of managing their draws and fades.

Once you're on the course, it's the usual golfing goal: get the ball from the tee to the hole in as few shots as possible. Your best bet is to keep the ball on the fairway until you can make a shot at the green, where the elusive hole lies. Should your ball land in the sand or rough, it will dampen your power and make it difficult to predict where your shot will land. The weather is also a factor, as rain cuts down your power (especially on the green) and the wind will blow your shot off course. The trick, of course, is to weigh in all factors and compensate for everything when you aim your shot. Here is where the true skill of 'Mario Golf' lies, and it involves a lot of basic math skill and gut instinct. Sure, you could aim straight for the pin... but with strong winds from the southwest and you chipping out of the rough, and the green is six yards higher than your current location... well, your shot will land quite a bit further from where you planned it. Learning how the various game factors effect your shot can be a bit frustrating at first, but you'll soon get the hang of it.

Describing the game's actual golfing interface would be a bit dull, but in a nutshell, it involves smart planning and a little timing. You can aim your shot by simply moving the analog stick and blasting away, but you'll soon learn to be more strategic. By hitting the R button, you can look at the map of the hole from overhead, where a grid will illustrate where your shot is likely to land. You can move the grid anywhere within your shooting range, which makes it easy to plan out your shot. Of course, the grid area doesn't take weather or the terrain into effect, so you'll need to adjust your aim accordingly.

Every time you take a shot, a bar with a moving slider pops up. You need to stop the bar twice for each shot; once for power, once for accuracy. If you time it just right on both counts, your shot will land pretty much where you aimed it. However, should you be off on either power or accuracy, your shot may fall short of your mark, or veer somewhat to the left or right. Some situations - like using a wood club out of the rough - leave a tiny margin for error, and any screw-ups in shot timing will cause you to duff the ball and waste a shot. Hey, it can be nasty out there in the golfing world.

It's weird... by reading this description, the game doesn't sound like a lot of fun. But my friends and I can't stop playing it, for whatever reason. The appeal is probably in the game's slower-paced, skillful approach. Instead of mindless button-mashing or pointless gore, 'Mario Golf' offers a more adult style of gaming, based on strategy and timing. And the ability to taunt your friends while they're trying to shoot (using the C buttons) is too much fun. Nothing screws up your putting game like Donkey Kong's primate screaming, or Wario singing ''one-two-three-FORE!!!.'' 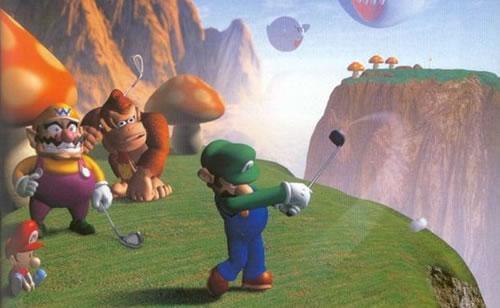 The graphics in 'Mario Golf' are, um, good for a Nintendo 64 golfing game. Mario looks like Mario, and the courses are well-designed... um... oh, whatever. Who plays golf for the mind-blowing visuals? It's a bright, fun, colorful game that screams 'Nintendo.'

Musically, 'Mario Golf' provides you with your daily dose of mildly annoying easy-listening. The sound effects are fine, though, and the character voices will crack you up.

Your best bet is to turn off the music in the options menu and pop in a CD or three.

I know what you're thinking: 'golf sucks.' But if you're a Nintendo 64 owner, this is a game you need to own. It's a lot of fun by yourself, and as a multiplayer game, it approaches (and perhaps reaches) the Upper Pantheon of 'Goldeneye' and 'Super Smash Brothers.' And since 'Mario Golf' is such a skill-based game, your ego will truly be on the line as you battle with your pals. This game may be a little hard to find these days, but it's worth the effort to track it down. Be warned, though... it MAY lead to increased golf appreciation.