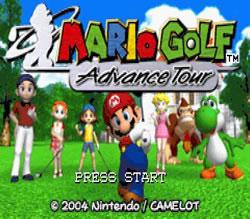 Before Mario Golf first came out on the N64, I'd never even dared to watch a Golf Tournament on TV, let alone play a round of it, as I was afraid of yawning myself to death. But strangely, adding Mario and the gang to a golf game made me want to try it. You could make a Chess game, throw Mario in it, call it Mario Chess, and people would rush out to buy it. But for some reason, no matter how much you dislike golf, the chances are very high that you'll like Mario Golf: Advance Tour.

Graphics: Graphics become strangely important in a Golfing game, due to the fact that, if you have bad graphics, you'll never be able to see how to make a shot. Fortunately, through the miracle of Camelot adding Golden Sun-like graphics to Mario Golf, everything turned out beautifully.

Throughout the game, you'll view golfing shots through different perspectives; while setting up a long drive, the game cuts to a birds-eye shot of the course, so you can plan out where your shots will land, and adjust what path the ball takes. When putting, the game's camera will focus in on the green, allowing for more precise and accurate shots. Right before you attempt a shot, the game switches to a third-person view behind your character, and you can adjust the ball's spin, and concentrate on shot accuracy.

As for the rest of the graphics, the scenery is done amazingly well, and looks like a real-life course. When your wandering about town, your character, and the other NPC's, look a but unattractive and sketchy at first, but you become used to the look. The characters can even show emotion by using face icons and symbols above their heads to represent feelings (example: Happy face, sad face, bead of sweat when a person is nervous). You've probably heard this by now, but if you've ever played a Golden Sun game, it's almost exactly like that.

Sound: The music sets a calm and relaxed mood during your Golf rounds. Birds chirp in the background on the fairway (don't worry, it's not really annoying) and when your attempting to make a putt, the music changes from calm to a more intense, will-you-make-the-shot kind of feeling. All in all, you can't really complain about the music.
There are also a few other sound effects, such as the noise from your club as you hit the ball off your tee, and your character makes a sound like "Hya!" when hitting the ball, to represent effort. The character voices are pretty limited. Also, after you finish a hole, or a mini-challenge, a voice tells you how you did. For example, if you complete a challenge, the game says "Complete!" or "Birdie!". So basically, the sounds and music are just fine, although they won't be winning any awards.

Story: Mario Golf: Advance Tour comes complete with a story. Basically, your a student of the great golfing legend, Kid (that's his name), and your goal is to become as great a golfer as the likes of Mario and friends. You also have a partner, who is computer controlled, when you decide to play doubles with them. When the story begins, you can (luckily) choose whether or not you want to play as a boy or a girl, and the one you don't select becomes your partner for doubles play. 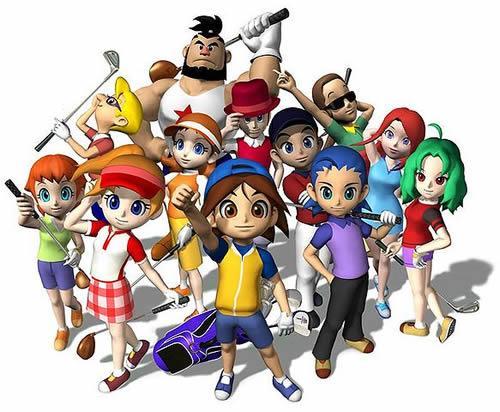 You start out at a golf club known as the Marion Golf Resort, where you are currently (and always will be) staying in a 2-room cabin with your partner. You also have a rival team across from you, whom you'll be competing with a bit later in the game. At the resort, you can go to the training grounds to practice various golf shots and attempt mini-challenges. After you think your ready, you can compete in a Singles Tournament, Doubles Tournament, or just practice the course. If you win, or at least place in a Tourney, you get a trophy, and you can then proceed to another club to take part in that Tourney. If you get good enough, you eventually get to play with Mario and all the others! But that will take a loooong time, which is kind of funny, since Mario Golf doesn't involve Mario a whole lot until later in the game. Despite this, the story is pretty good, seeing as how it's hard to fit a story into a Golfing game.

Gameplay and Controls: There's a ton of gameplay in Mario Golf: Advance Tour. Besides taking part in the big Tourneys, you can play mini-games at all the Golfing Practice Ranges. The mini-games are basically set up in 2 different ways: one is, sink 7 out of 10 putts, and you complete the challenge. The second set-up is, land 7 out of 10 drives withing a certain radius of the hole. If you do, then you can try the same challenge again, but with a harder difficulty, meaning the radius around the hole in which you have to land the ball in with a single drive is smaller, and thus harder to do. These types of challenges have Easy, Normal, and Hard difficulties to them, and you have to complete the first one before you move on to the next.
But you are rewarded for your time in 2 ways: first, you get Experience Points, which allow you to upgrade your player's level and improve an aspect of their golf skill, such as ball control or drive distance. I felt that this EXP system really added a lot to the game, since it encourages you to practice more, and engage in all the side games. Also, you can use the Experience Points to upgrade your partner as well as your player, so they're better when you play doubles with them.

The second way you're rewarded is, when you complete a particularly hard or secret side game, you earn either a Custom Ticket or a Power Drink. Power Drinks simply increase your drive distance on the spot, while tickets can be taken to the local blacksmith-type guy, and he'll make you a set of custom-made clubs. There a 4 different kinds of tickets (A, B, C, and D tickets), and for each one you have, you can choose which one set from a list of 5 club sets you want. Each has a special attribute, such as boosted power, or extra ball control, and you can get more than one of each ticket (Ex: you can get 2 or 3 A-class tickets). Also, you can switch club sets at any time by just going to the in-game menu. And, once you get on into the game, you can start to unlock opponents as usable characters by beating them, or meeting a special requirement. Let's also not forget that, if your not up for Story Mode, you can just play a game for fun by setting it up on the main menu. There's so much gameplay, it'd take you a month of playtime to earn everything.

Now controls, like everything else in this game, are masterful, and you'll barely have any trouble setting up the perfect shot. You can choose between Light, Normal, or Power shots with just the touch of a button, and it's easy to add Topspin or Backspin to your shots, to better control them. The controls are a breeze to learn, even if you've never played a Golf game before. 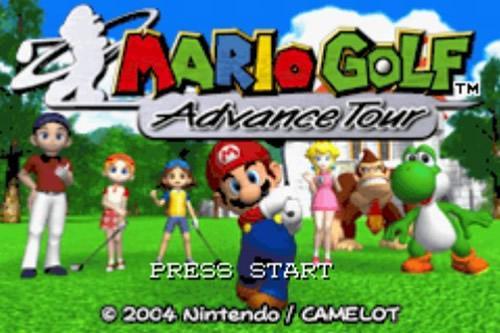 Length and Replay Value: Like I described in the Gameplay section, there a hundred things to do in this game, and you'll keep wanting to play more just to earn new clubs and EXP. And even after you win a Gold Cup in a Tourney, you can re-enter it and play again as the Defending Champion, earning more Experience, and yet another Trophy, which is displayed in your room in your cabin.
It's doubtful you'll want to replay the entire game, since it's so long. But the best part is, you don't have to! You can just keep replaying Tourneys, challenging Mario and all his friends, and it seemingly never gets old, since your best scores are recorded, and you can try and beat them. There are also Club Best Scores that you can beat, and thus earning you a new course to play on!

In Conclusion: Whether you're an avid golf fan or someone who's just looking for a purely enjoyable game, I'd recommend Mario Golf: Advance Tour to you. Trust me, I've never liked, or even watched, golf in real life. But regardless; Mario Golf, it seems, is perfect for anyone!

Whether you hate golf or love golf, it doesn't matter with Mario Golf!