Mario Kart is one of the best kart racing series that you can play nowadays and Mario Kart: Super Circuit capitalizes on the success of the series and it provides a whole new set of interesting game mechanics that successfully manage to keep the recipe fresh.

Mario Kart: Super Circuit is the first Mario Kart game that was released on a handheld console and it offers a wide range of races that will keep you entertained for a very long time, thanks to the great AI. This is the only Mario Kart game that has a different name for the Japanese and international versions (in Japan the game is known simply as Mario Kart Advance) and, on top of that, it’s the last game in the series which used 2D sprites as after this instalment the series transitioned into 3D sprites.

In December 2011, ten years after it's initial release this title was re-released and accessible for all participants in the Nintendo 3DS ambassadors program. 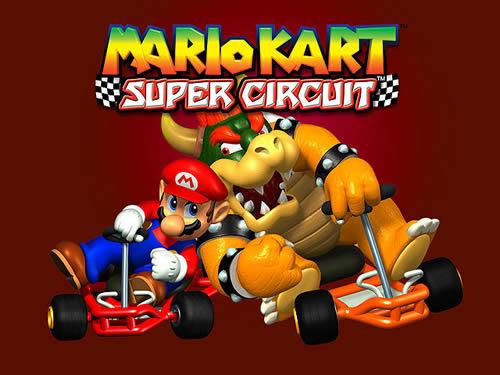 Just like in any of the other games in the series, Mario Kart: Super Circuit is a kart racing game, so your objective is to control the cart and defeat the other enemies in order to finish the race in the first place. This is a game where weapon power-ups are allowed and which are actually a great part of the gameplay. The interface is beautifully designed and it allows you all the necessary information, from the game map to the lap number, race time as well as the current rank.

The weapons or power-ups can be found in boxes scattered all over the levels, and each one of them offers a valuable way to finish up the levels. Some make your character invincible, while others enable you to damage the opponents and gain the upper hand in your battle to get the first place. The interesting thing here is that this is the second title in the Mario Kart franchise which includes coins, and these are used to increase the kart speed.

Collecting all the trophies in the game can be a major challenge, but if you manage to gain at least one you will see that the background of the title screen will change into a sunset scene, a nice easter egg that you can take advantage of. If you gain triple star ranking for all the Super Circuit cups, then you will receive a night time version of them as well as a changed musical theme for the intro.

Controls
Mario Kart: Super Circuit comes with simple controls, as you need to use the arrow keys in order to select, A to confirm, B to cancel and the Select button to customize options for different modes.

When it comes to the in-game controls, you can use the arrow keys to steer, A to accelerate, B to brake, the R to hop or to perform a power slide, or the L to use the items that you gain as you play. B+arrow keys will allow you to drive backward, while the combination of L and the up/down keys will help you shoot the item you want in the desired direction. You can also perform a quick sharp turn with the help of the A, B keys and left/right. By pressing the Start button during the game you will be able to pause it and, in the end, you can press the Select button during the races to sound the horn.

Overall, the controls in Mario Kart: Super Circuit are very easy to get accustomed with and they provide you with a wide variety of choices. 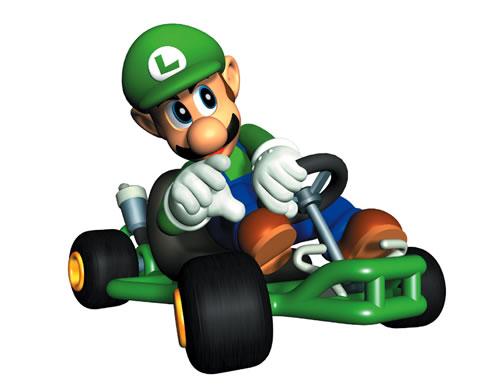 A Luigi Artwork from Mario Kart: Super Circuit, given his recent track record, I imagine he might be 'Ridin Dirty

You can enter five different game modes in Mario Kart: Super Circuit, each one with its wide range of challenges. Most of them can be played in singleplayer, but there are a few of them which can be used in multiplayer sessions as well.

The Mario GP is the campaign mode so to speak, and it includes numerous predetermined courses that are split into various engine classes. As expected, these three classes (50cc, 100cc and 150cc) are the difficulty levels, because the more horsepower the engine has, the harder it will be for the player to achieve victory; on 150cc some of the competitors can get darn right mean!

MKSS comes with 20 original tracks, and 20 retro tracks from previous titles in the series. The tracks are divided into different cups, the Mushroom, Flower, Star, Lightning and Special Cups.

You need to get the best results in each competition, and in the end you will attend an award ceremony, if you manage to get placed in the top 3 drivers. You can unlock extra cups, tracks etc by getting gold in certain things - more about the unlockables and tips in Mario Kart Super Circuit here.

The time trial mode is another way to play Mario Kart: Super Circuit, and here it’s all about finishing the races as fast as possible. The best times that you can achieve will be saved as ghost and your main challenge will always be to improve your times. While playing this game mode you will receive a Triple Mushroom that can be used at your own pace; which I guess is so you can practice the best and most appropriate places to use a boost.

The quick run is another interesting game mode and here you can simply practice at your own pace. You are free to choose any course that you want and the number of laps for each race, so everything can be customized according to your own needs.

Just like any major racing game, Mario Kart: Super Circuit also brings a versus mode, and the multiplayer does shine thanks to it. Up to 4 players can play in it, and it’s indeed very nice to engage your friends in a race.

Lastly, the final game mode is Battle, where the player fights against other human players in a battle, and each one of the players can use the items that are placed in the arena. Here you need to pop the balloons of the opponent, while defending your own. This game mode is challenging and very funny because of the amazing gameplay opportunities that it generates.

Mario Kart: Super Circuit brings you 8 playable characters, each one with its own set of different skills.

The drivers use the same go-karts like in the other installments of Mario Kart (a pipe frame style) and they can be listed in different classes, depending on their weight. The classes are Light, Medium and Heavy. These classes affect the stats of each character.

Lightweight characters bring a low top speed and high acceleration, medium ones are good for everything and heavyweights have a very good overall speed, although they come with a very bad acceleration.

Mario is a Medium driver and it has an average speed. It’s one of the recommended players for the average user that has played a little Mario Kart previously. Luigi is another Medium driver which has similar stats when compared to Mario.

Lastly, we have the heavyweights which are Donkey Kong, Wario and Bowser. All of them have slow speed, with Bowser being the worst of the bunch. They do however bring a great acceleration which makes them suitable for tracks with lots of twists and turns.

There are numerous characters that will appear in the game as non-playable, and each one of them will help or even engage you, depending on the situation; for example Lakitu will very kindly pull you out of the lake after you fail, Snowmen will get in your way on already treacherous ice courses like Snow Land and Thwomps will endeavour to "squash" your hopes of victory by... well, quite literally squashing you.

The full list of NPC's in Mario Kart: Super Circuit includes lots of familiar characters most of them being popular in the whole Mario franchise. These include Boo, Cheep-Cheep, the Crab, Lakitu, Little Mouse, Mecha-Koopa, the penguin, Piranha Plant, Shy Guy, Magikoopa, Thwomp and the Snowman. While they are not playable, these characters more than make up for it by offering an intense environment in which they fully interact with you.

Mario Kart: Super Circuit is the only game in the series that doesn’t introduce any new items, instead uses the ones that were available in the previous versions of the game, but that is to be expected.

Banana
This item can be either dropped in the back or sent in front in order to defeat the enemies. The bananas are commonly used as obstacles and when a driver runs into them, they spin. These can be destroyed with the help of Star or Shell effects.

Green Shell
This is usually a common item for the highest ranked drivers and just like the bananas it can be held or thrown in front. It can be destroyed by shells, bananas or stars.

Red Shell
This is similar to the green one, but instead of targeting only the highest ranked drivers, it will attack everyone, so these are very dangerous. The same types of items that destroy the green shell will also destroy the red one as well.

Mushroom
This is a common item and it provides a good speed burst for a few seconds. These are suitable for off-road racing and they can also give a good speed boost when you choose to go up the ramp.

Triple Green Shell
This one is a shield that allows the driver to shield himself from attacks. This is one of the items that can’t be thrown back.

Triple Red Shell
This is the same as the previously mentioned item, but it can be used by lower ranked drivers as opposed to the green one that can be used only by the ones with a high rank.

Triple Mushroom
This item can be found only in trial mode and it provides racers with 3 mushrooms instead of a single one, which is a pretty large boost.

Boo
The funny boo can be used to steal an item from a random driver, it can grant invisibility as well as the ability to attack the driver in the first place.

Star
The star is very useful as it allows the character to be invincible for a few moments, but it also increases the handling, speed and acceleration for a small period of time.

Spiny shell
This item is very dangerous, and when thrown in front it will target the first place, damaging everything in its way. When left on the ground, it will damage the racer that touches it.

Thunderbolt
This shrinks the drivers that aren’t using a boo or Star. The shrinking is not permanent, but while in that state the drivers lose speed as well as the option to engage a mushroom boost.

The game comes with 20 new courses, while also providing 20 more from the original game. The cups that unlock the Super Mario Kart courses require you to finish the Super Circuit in the first place.

We also get the opportunity to participate into a special cup which includes the Lakeside Park, the Broken Pier, Bowser Castle 4 and the Rainbow Road.

The game has sold close to 6 million copies worldwide (2.53 million of them in the U.S alone) and it still is the fourth best selling game on the Game Boy Advance Console. It was actually named the 19th best GBA game by IGN. Super Circuit has an average of around 93% average based on 24 reviews on Metacritic, and every one of them calls the game very easy to play and fun. GameRankings was equally in awe of MKSS with a current total of 38 reviews giving an average score of 92%. 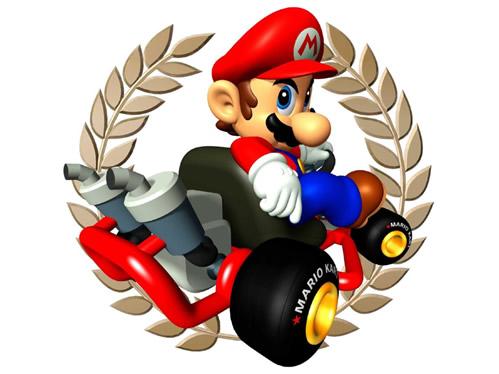