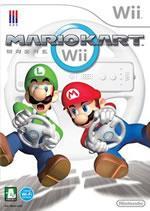 "From someone who's loved all Mario Karts so far: A lot of old goodness with a lot of new goodness"

Long have we been waiting for it, finally it's here: the latest installment of Mario Kart has just arrived for the Wii. And to just make it clear in the beginning: those who've liked the previous versions of Nintendo's top fun racer will also like the Wii version.

As it's been the case since the SNES version, characters from all around the Mario universe come together and make out the top driver among them. After creating your driver profile, choose your game mode, your favorite driver and vehicle and finally the race type. Now the fun starts - you'll steer your driver through different courses, collect items such as mushrooms, shells and bananas granting you the ability of quick turbos or to hit your enemies, beat your own track times or fight a big battle royale for balloons or coins alone or with friends.

The first thing you'll probably tackle in one-player mode are the Grand Prix races. One of these consists of four tracks with three laps each. Difficulty increases with increasing motor power, from 50 ccm to 150 ccm. While the 50 ccm cups are rather easily won, the 100 ccm ones are already quite a challenge, and the 150 ccm ones will also require a lot of luck (besides hours of training). By winning the available race cups you'll unlock new ones, just as one would expect. By fulfilling certain requirements - mostly being fast enough and winning cups - you'll not only unlock new courses but also new drivers and vehicles. Overall there are sixteen new tracks and an additional 16 remade older tracks from previous Mario Kart games. Pure nostalgia! Add to this some new and old multiplayer stages, twelve initially available and twelve unlockable characters with three car options each, you get yourself a big heap of options and fun.

The controls and basic gameplay pretty much work like they always did with two buttons for acceleration and braking/going backwards/initiating drifting and the the direction pad for item usage. For the actual steering you can either use an analog stick or the motion sensing of the Wiimote. Nintendo did an excellent job implementing all possible control pad devices, from the classic controller to the Gamecube one and the Wii remote in two configurations. The most fun, of course, is the steering wheel that's sold with the game. You plug in your Wiimote and get started. Even though it did take me a bit of time to get used to (it's been my first experience with that peripheral add-on), this is probably as close as you can get to simulating a fun racer with no claim of real-life physics. If you want to go for the best times, however, either the Gamecube pad or the classic controller offer the slightly better reaction time of the analog stick compared to the motion sensing of the Wiimote. 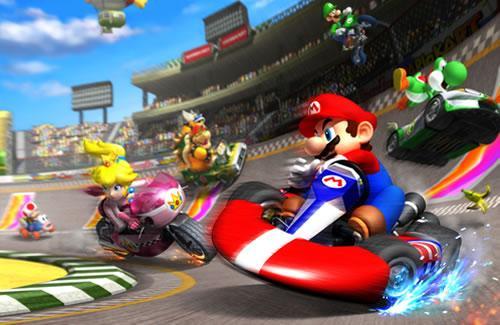 Now what's new in Mario Kart Wii compared to the previous versions? Drifting is still in the game and an important technique, but it takes longer until you get a small speed boost, so the infamous 'snaking' technique is less easily doable. To make up for that, you can perform stunts (just flick your Wiimote) whenever you leave the ground, e.g. make jumps over track obstacles, which nets you a small boost. The same goes for driving in an opponent's slip stream. And there's a new class of vehicles besides karts: namely bikes. They allow you to perform wheelies to gain a speed boost. But take care, while you drive on your back wheel only, steering is almost impossible and you're more vulnerable to hits from enemies. Unfortunately, in my opinion, jumping was not brought back, neither the small jumps nor the feather power-up for big jumps.

One special feature of Mario Kart games making the game often very hard for front-runners but more motivating for the racers in the back is the rubber-band effect. This includes the fact that the 'best' items can only be obtained by the contestants on the last few places. I, personally, am happy this was kept for Mario Kart Wii, even if many others may disagree with me, as the game's difficulty is increased a bit unnecessarily in a somewhat unfair way to level that can be frustrating, especially in the 150 ccm cups.

The new tracks are very diverse in terms of their setting, you race on the standard gray laps between grass and flowers as well as on snowy halfpipes, over huge mushrooms, through dark caves on lorry tracks and around lava eruptions. But also the retro tracks are well done and most were revamped to suit the 3D environment. Everything is kept very joyful and brightly colored. There's only one thing that bothered me a bit: the graphics almost could have been done on the Gamecube. However, it didn't do so for too long - as this is not what matters most in this game, and by no means are the graphics bad. Together with this appealing cartoony optical presentation goes a soundtrack that suits the merry appearance of the game. The tunes playing on the different tracks are nothing outstanding, but they serve well as a background and often also support the sometimes hectic gameplay. This is even improved by very nice sets of sound effects for almost any occasion. You can hear incoming items, brakes and NPC sounds all of the time - and they are even helpful most of the time. None of these ever got on my nerves so far, except when I heard an incoming blue shell, but that's not the sound's fault...

Speaking of item power-ups; you still collect them by driving through a ?-box. There are the well known attack items like shells, bananas and thunderbolts as well as the turbo-granting mushrooms. And there are a couple of completely new items like the big mushroom to crush enemies or the transferable thundercloud to zap enemies. Overall, there's nothing ground- or game-breaking new, but the power-up items are still what make the game as much fun as it is. 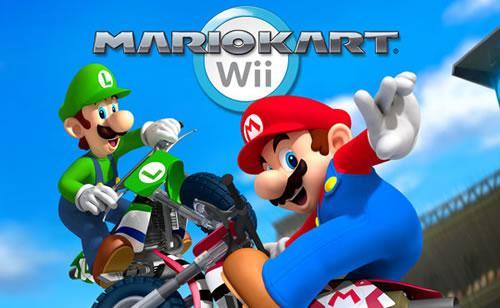 Aside from the single player race modes such as the cups and time trial mode, there are also two battle modes. Here there are two teams of six battling for coins or aiming at popping as many of the opposite team's balloons as possible in the given time - all of this in five new and five old stages remade from previous Mario Kart versions. Almost all of these modes, with the exception of the ghost race time trial, are also playable with multiple players. And this is where the biggest fun begins. While on your home Wii up to four people can participate, there's also the online capability of the Wii. And in online play, there can be up to 12 people racing or fighting each other! Unfortunately, I haven't been able to try that out myself, so I have to rely on a friend's opinion. I've been told that the setup works very well and also the ranking and friend list system implemented on a separate Wii channel are easy to use. The online races themselves have next to no apparent lag, but there is sometimes - even if rarely - some 'de-syncing' observed. This can happen during the interpolation time when the game's waiting for everyone's signals, but most of the time this doesn't influence gameplay at all. Finally, also a short mention to those wondering about the double team action from the Gamecube's Double Dash: no, there es no such thing anymore.

Overall, coming from somebody who's loved all previous Mario Kart installments (except for the DS version which I've never played), I can only recommend Mario Kart Wii, for both single player and multiplayer sessions. The overall presentation is appealing and there are hours upon hours of fun to be spent on 32 + 10 tracks, additionally with virtually thousands of online opponents, but already offline play alone warrants the price for this game. The steering wheel peripheral that comes with the game makes the controls very authentic as the motion-sensing works really well, and the revamped tracks from older installments just top the game off also for the somewhat older players with fond memories.