So it was my birthday on Wednesday, and I got one of these and a Wii U Pro controller, which was the best present I've had probably since the Super Mario World SNES bundle in 1991.

The premium pack comes with a 32GB Wii U Premium edition, and a single disc which includes both NEW SUPER MARIO BROS U and NEW SUPER LUIGI U, it also includes loads of videos of play throughs of both of those games, how to beat all the challenges with gold medals, how to do loads of cool tricks to get lots of 1-Up's, and some "SuperPlay" videos, which are basically videos a madskilled Nintendo guy playing through some levels, to make normal gamers feel inferior... impressive non the less. 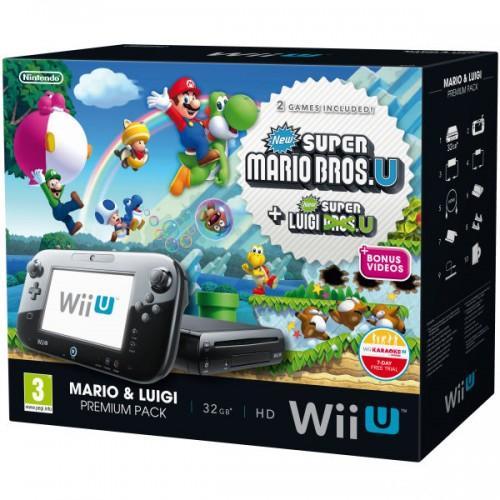 So, why do you care? Well for anyone who got New Super Mario Bros U or New Super Luigi U when it came out all that time ago, there may have been some of the challenges which you weren't able to get gold medals on, some tricks you might not have know about etc, I am capturing all of the bonus videos in 1080P HD at the moment for you guys to check out on our YouTube channel - I've already added quite a few of them and you really should check them out, this is NEXT LEVEL gaming.

If you like the ones I've put up already you should consider subbing us, as I'll be adding the rest of the SuperPlay videos in full HD over the next few days, weeks. I'll also be putting up the New Super Luigi U ones straight after that.

A SuperPlay of some levels of Acorn Plains from New Super Mario Bros U on one of the bonus videos.

For anyone who has been considering a Wii U but not taken the plunge yet, this has to be the deal that converts you,  you can now get this from Amazon, at the time of writing its priced £219.99, Mario & Luigi 32GB Wii U Premium Bundle

, a pretty good deal for a Wii U 32gb with 2 first party Nintendo games I'd say!