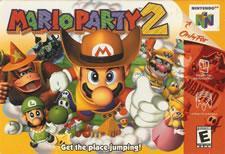 INTRODUCTION: Mario Party 2 is the second installment of a great gaming series that started in 1997. Mario and his crew of 5 other people are now fighting over what to name their new land. Mario wants one name, peach another and Wario yet another. They get into a huge fight where toad yet again comes up with a solution. They will play various games to find out whom the super star is. They all get to work immediately in this hectic game of games, luck, and the road to super stardom. There are many worlds from Western world, Haunted world, space world and even a water world. But you can bet your bottom coin that bowser and baby bowser will be there to ruin the fun. But never fear, you will be well equipped.

GRAPHICS: For the N64, the graphics couldn’t be better. There is absolutely no slowdown even without the expansion pack. The characters are superbly designed. My only beef with them are their slightly cubed look. The worlds are extremely detailed right down to the last ghost or tumbleweed. They didn’t hold back at all in the mini-games with favourites like bumper balls. Even the menus are very graphically detailed. The option room has everything from the knobs to the blinking buttons that we all want to press. The mini-game train track is so realistic that I felt like turning down the AC as I delved deeper into the challenge. The characters, stages, menus… Nintendo went all out on the graphics for this game. My graphics score: 9/10

GAMEPLAY: This is where the game excels the most. The mini-games are so fun and addicting, I was up until 3 AM at some times just playing the same mini-game. But with 50+ mini-games, duel mini-games where you go head to head in a sword fight or brewing up some mushrooms, and battle mini-games, where your coins are on the line… as well as your rear, you will have a hard time getting tired of this game. There will be at least one game that you will fall in love with. Many people might think that the board portion of the game would be boring. WRONG! You will be kept at the edge of your seat whether you are awaiting the death-ray countdown or hoping the spinner wont land on you, you will be having a blast as you laugh into your friends face as he is left charred in the wake of a death-ray. Granted this is A LOT more fun with your friends around, but you can still have fun on your own. My game play score: 10/10 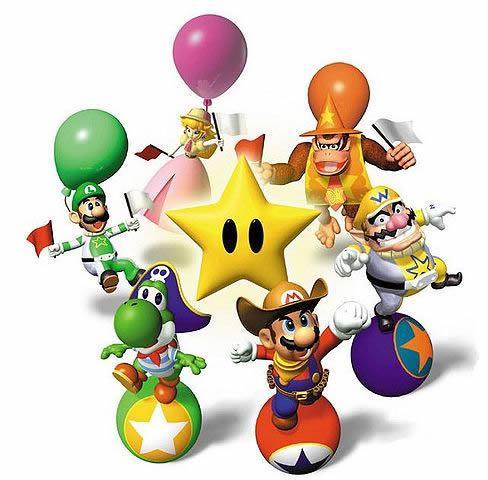 SOUND: doo doo doo doo doo… oh sorry. It’s just that the tunes on Mario Party 2 will leave you humming them for weeks at a time. The opening title screen music is so great that after a month of not playing I was still humming it. Each world has the perfect tune to fit the scene, while still keeping it toe-tappingly good. You will be head banging to the banjo in western world or cowering from the haunted whistling theme. But what would be any game without sound effects. When you lose your coins, it sounds just exactly as a man would if he lost a bet. When they get hurt… ouch! Mario Party 2 has the best sound and music that fits the game perfectly. My sound score: 10/10

CONTROL: What is there to say? It’s pretty good. All of the controls for the board are very simple. They have the button menu right there as you play. Every mini-game has its own controls and might get confusing at times, but once again they have everything right there for you. If you are worried about control, don’t worry; you are in good hands… er… controllers. My Control score: 9/10

REPLAYABILTIY: Mario, party, 60+ games total… you do the math. This game has an infinite amount of replay value. Each game is very addicting and there are over 60 games… you would have to play 3 years STRAIGHT to get remotely tired of the game. That’s for when you are playing alone. There is endless replay value with your friends around. You can even set up certain rules with a certain amount of games. Make a contest, make a story, make a battle to the death, the possibilities are endless. My replay score: 10/10

CONCLUSION: Mario Party 2 is a great game that should be in everyone’s N64 video game library. With the right balance of Graphics, game play, sound, control, and replay value, this game is the best of its genre. Get it, its worth every cent of its cost.