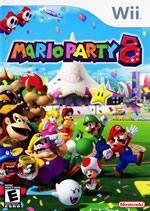 "Mario parties his way onto the Wii"

When Nintendo released it's latest system, the Wii, gamers everywhere were overcome by how innovative the controls sounded. That's one thing that Nintendo has over its competitors. Nintendo never was a graphics kind of company, they were just always about making the games fun. Once we heard about the Wii's spazzy new controls, we knew there had to be some kind of game to take advantage of them to its fullest. And we weren't wrong. Several games since the release of the Wii have been developed primarily to utilize the interface. Mario Party is a prime example of this. Mario Party 8 takes the classic, cartoony, Mario-ish feeling of the previous games of the series and throws its own new twist on things by adding the Wii's motion controls. This combination makes for a very fun experience.

This has always been the bright spot of the Mario Party games. At some times you'll be laughing at some of the cut-scenes after mini-games and enjoying your 10 coins, and at other times you'll appreciate the fact that you have the wrist strap on because you're ready to throw the remote after the computer used a thrice candy to roll 3 dice and advance to get a star. But, that's always been an element of this delightful game for as far back as Mario Party 1. Computer luck can be very frustrating, but the rest of the game more than makes up for it. Over 70 new mini-games have been added to the game, each of them unique in their own ways. For some of them, you hold the controller sideways and play NES style, using the D-Pad to move your character and the buttons to perform actions. Other controller styles include the point and shoot, to aim a projectile-launching weapon of some sort. Also, for one game, you have to clench the remote in your fist and hold it vertically and shake it up to make your character on the screen shake up his pop can. Another mini-game will have you go through a series of objects that you must perform different actions on by sawing a log, painting a board with a brush, and continuing to raise a flag.

You really look forward to every mini-game even if you've played it before simply because of how much of a difference the motion controls make. There aren't as many boards to play on in this game, which is slightly upsetting. But the boards that are offered are well-designed and fun to play on. On each board, there are different ways of getting stars. On one course, you have to reach the end of the level before another character and when you get there, you are given a star and sent back to the beginning. You can pay to skip a certain amount of spaces, or buy candy to help you. Another board puts a twist on the game of monopoly. You must buy hotels and invest in them in order to acquire your stars. Each board requires different strategies of obtaining your stars.

Like I mentioned before, this is the absolute highlight of the game. You will never get bored playing the mini-games because they are so involved and truly unique. Nintendo certainly did not drop the ball here. There are several different ways you must use the remote, so often you will have to read the mini-game instructions and possibly even practice before diving right into the game. 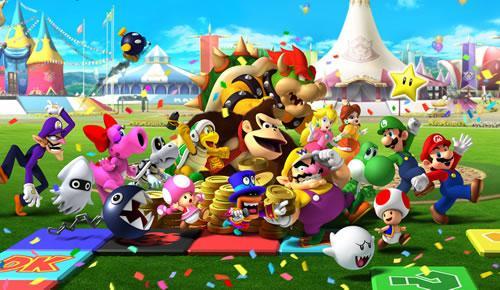 The character noises can be funny to hear again, and the zany Mario Party soundtrack brings you some new tunes. Some of them are familiar remixes, others are brand new songs. Either way, the music blends in perfectly with the game and just combines very well to make that good, Mario-esque atmosphere for your partying.

Not bad, but nothing to especially say anything about. The point of this game isn't good graphics anyway, so if you put that aside, you really should enjoy this game. It was good, however, to see some Mario characters remade. The Mousse from Paper Mario can be seen on the train level, and a secondary objective is to locate her for a bonus if you land on a question mark space that prompts you to do so.

Great game to pass an hour or two or just a few minutes, if you want to only play a few mini-games. Excellent party game. The only thing I could think of that would make this game better is maybe a couple more boards and a wi-fi mode. But for what it offers, Mario Party 8 is an excellent addition to any collection of Wii games. I definitely look forward to what Nintendo has to offer next in this series. In the meantime, I recommend this game.