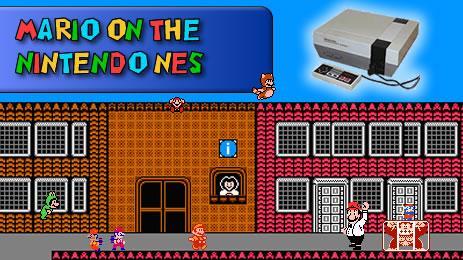 Below are the Mario games on the Nintendo NES that we cover. Visit a games page by clicking its box image below.

The Nintendo Entertainment System, known by many as the NES, was the first video game console to be released by the Nintendo Company. This 8-bit system helped to revolutionize the video game industry after the wide spread crash that was experienced in 1983, the year that the NES was launched. Though it took years to reach foreign shores, it was greeted with open arms by gamers who were looking for a successor to the Atari home console. It was no surprise that this system was the best-selling of its time.

The development of the Nintendo Entertainment System was important for several reasons. Aside from pulling the video game industry out of its slump, it set a precedent for business models in the industry that are followed to this day. Also, it was the first home console to launch a series franchise, namely, the Mario Bros series. The Mario games on the Nintendo Entertainment system are one of the most commonly attributed reasons that the system was so successful. The original “Super Mario Bros.” game was one of the greatest factors in selling systems. The game was so incredibly popular that copies of it were constantly produced to keep up with orders. To this day, it remains as the best selling Mario game, with over 40 million units sold and countless spin-offs and other games.

The Mario games on the Nintendo not only helped to sell the system in Japan, but it helped the system break into the American market. The colors, graphics, and gameplay caught the attention of more people than the Nintendo Company ever imagined, and allowed for the growth that would spawn the rest of the Mario franchise. With a vast

demand for all Mario games on the Nintendo Entertainment System, the company obliged with multiple sequels and the revenue needed to launch their next home console.