Nintendo Does Bring Back Characters
Login

Nintendo Does Bring Back Characters

***
gplus
Digg
Gshare
Reddit
facebook
Pin It
twitter
Throughout Nintendo’s lifespan, the claims from the ‘hardcore’ fans have always been the same. That Nintendo only creates lazy palette swaps of existing characters instead of bringing back the interesting ones, that most of the Mario enemies and bosses never return and never will and that the Koopalings were oh so popular and in so many games before vanishing and only appearing in minor roles since.

But the thing is, these claims are dead wrong. Nintendo hasn’t stopped bringing back as many enemies and characters, they brought back more. Yeah, poor Tatanga and Wart kinda got screwed over by history sometime in the past, but the sheer range of normal enemies and obscure things Nintendo is bringing back is almost large enough to be the next wonder of the gaming world. But hey, most people think ‘character or enemy’ in the same narrow scope as people in the real world think of ‘animal’ as meaning ‘cute things humans like’. Or in fan speak, they think ‘obscure character’ and instantly assume Tatanga, Wart and the Koopalings. Meh, not true Mario fans them, just like the journalists who think ‘Mario is based on Alice in Wonderland’ and ‘Mario is named after NOA’s Landlord’ is ‘interesting obscure video game knowledge’.

Never the less, for a quick show of interesting enemies that made comebacks, and in a greater way than before, let’s begin the list proper.

First up, we’ve got Rocky Wrenches, Rocket Engines and Firebars. I’m assuming most people know what those are if they’re reading a Mario blog, but basically, the former are those Koopas that come up out of manholes on airships and throw wrenches, the Rocket Engines are the flamethrower things on the back of airships, and the firebars are... those spinning bars of Mario's fireballs found in the original Super Mario Bros. The latter are technically not too obscure, they’ve appeared in quite a few Mario Kart games in the Bowser’s Castle tracks, but the others were for a long time Super Mario Bros 3 exclusives. Yep, so with their Mario Kart DS showings, they made a really, really late return, about seventeen years later if you count the Japanese release of SMB 3. More interestingly, they’ve got from one off enemies to recurring monsters in that time too, the Rocky Wrenches appeared in Mario Kart DS, Super Mario Galaxy, New Super Mario Bros Wii... in other words, they appeared three times as often in recent games as in their heyday. Similarly, the Rocket/Jet Engines. Appeared in Mario Kart DS, New Super Mario Bros and New Super Mario Bros Wii. Also much more than back in the 90s. But of course, far fewer people know of these things than the Koopalings, so the whole ‘Nintendo is lazy and evil’ cliche stays around with people who should really know far better.

Other examples, because I have lots. Sherbet Land went from a Wario Land place to a Mario spinoff place. Big Bob-omb is actually one of the most recurring villains in the series, being in Mario Party 2, 5, 8, Advance, Mario Baseball, Super Sluggers, Mario Kart DS and Mario Golf Toadstool Tour. Not exactly a dignified set of reappearances, but it’s better than being forgotten about as soon as Super Mario 64 started becoming a memory. Of course, nobody remembers the Bob-omb Mafia in Mario Party Advance, or how Big Bob-omb is literally throwing down bombs from the Koopa Clown Car in Super Sluggers. Nor does anyone remember the music for Bowser’s Castle in the game is a remix of the New Super Mario Bros castle music yet more epic.

Come on, no one remembers this?

Similarly, for an interesting reappearance, remember the Goomba King/Goomboss? Everyone knows he’s the same, and that he appears in three games, right? Wrong. Four games. The Chestnut King in Paper Mario 2 is the same character. You know, from Luigi’s stories? Note the same name in Japanese, Kuri King. Based on the word Kuribo.

There’s also the obvious example of Captain Syrup reappearing in Shake Dimension, albeit as a friendly NPC rather than a villain as such.

Or the Blarggs and Grinders reappearing in Super Mario Galaxy 2. Oddly, it’s the former’s likely first reappearance in a mainstream Mario game since Yoshi’s Island, after when they got shunted over to being more a Yoshi series enemy/monster than a Mario series one. The fact they look awfully like their Yoshi’s Island versions even in Super Mario Galaxy 2 is awfully interesting... but how about the sheer similarities to the Yoshi’s Story variants? That’s not a game most expect to get referenced any more.

You also have the Super Princess Peach baddies list. There’s an awful lot of reappearing Mario enemies from Super Mario World and Yoshi’s Island here, even to the point the Fishin’ Boo makes a reappearance (chance of this being expected beforehand... zero percent). Just look at the sprites it brings back, and it’s almost quite amazing really, to the point it seems the creators had quite the knowledge of obscure Mario games.

Rex? Torpedo Ted with launcher? Yoshi’s Island cannons? Heck, that’s a lot of bizarre reappearances, and yet ones hardly anyone even knows of. 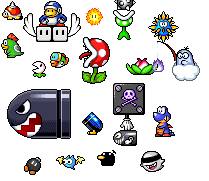 Or even, what of Super Mario Advance 4? That game had a lot of obscure enemies brought back, including half the Super Mario World cast... Big Boo, hopping statues, Magikoopas, even Chargin’ Chucks made it in, so that literally only leaves the Dino Rhinos as the last remaining non appearing enemies in recent times. 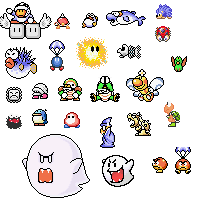 The fishbones... The Boo Rings in New Super Mario Bros Wii, the Whomps in Mario Galaxy... ***, even the giant spiked pillars of doom and Tox Boxes as obstacles... all stuff Nintendo has brought back in recent Mario games as almost nostalgia for the fandom. That only leaves one thing left... the Roto Disc. That thing has pretty much never appeared since, although in a Mario Wiki non knowed about example, it did appear in Super Mario Land 2 in the Mario Zone:

The only reappearance of a Roto Disc known to mankind.

Heck, that game brought back the saws and grinders from Super Mario World, although apparently even Mario Wiki doesn’t care less (or know). And remember those Goomba divers? They made a reappearance in Mario and Luigi Superstar Saga many years later as standard enemies.

Then in turn, New Super Mario Bros Wii brought back the spiky ball like creatures from Chucklehuck Woods as enemies in the dreaded level 9-7. Yep, compare:

Alongside the next guy. Yeah, Mario Wiki lists different names, but there’s a fair old influence here, even if our old well known site seems to try and avoid any connection between any of the games.

Not to mention a somewhat similarity between this Wario Land enemy and this Super Mario Galaxy 2 enemy, as well as their behaviour and habits. Could it be a connection? An inspiration? I honestly do not know:

Come on, there’s a definite similarity here, and their attack patterns are rougly identical. But I doubt Mario Wiki will even make a remote jump in logic with their insane wiki rules, to the point they won’t even point this out in the trivia section.

But in conclusion, Nintendo no doubt does listen to its fans somewhere along the line, since an insane amount of minor enemies and characters become major recurrers in their more recent games, and it almost cannot be a coincidence. Not every monster faces the miserable fate of Tatanga and Wart, consigned to the dustbin of history for video game bosses. Okay, to be perfectly fair, the guy who looks like a cloud with eyes in Super Mario Land, Cloud N Candy and Gilbert the Gooey really DO deserve all the misery and forgotten aboutness they get...