Well hello there, ::waves:: let me guide you through another routine episode in the land of rather illogical yet endearing at times showness, The Super Mario Bros. Super show…! Cue the intro.. the addictive game theme song wrapped up within a rap and promoting the idea of being hooked upon the brothers.

Okay… now two Italian ladies, the cousins of the brothers, are informed via Mario and a corded landline telephone that a well known NFL defensive end, Lyle Alzado is on his way over… thus confirming the brothers will not simply fix a sink, they will invite you over for lunch… if you are a professional football player!

Next comes the cartoon segment: Mario’s Magic Carpet. Plumber’s log #437 searching for Aladdin’s lamp to free Princess Toadstool’s people. Mario imagines mirage style that a camel’s slurping tongue is a waterfall. The next mirage is more dangerous than spittle as it is a fake swimming pool trap-oline. The group of bipeds is then flung into a castle the Sultan resides within. His profoundly huge palace desires slaves among the males of the group and expects a new harem member of the female. Ugh… where is the reverse harem for wii ladies? Princess Toadstool informs the man that she has no desire to participate in antiquated practices yet he reinforces that he does not care about her permission or desire. The sexist Sultan tires of the willful Princess who refuses to wear the harem costume and the Sultan opts to sell her in an attempt to ease his mind. King Koopa offers to buy the princess from the frustrated man requesting 54 urns of chopped chicken liver… what would the food loving bros. say of liver?

Meanwhile, the brothers enlist the help of a genie from within a magic lamp. She looks like an elder Wilma Flintstone and performs as would Aunt Clara from classic television series Bewitched. Instead of conjuring a magical spell she creates a horrible smell. King Koopa next takes the princess upon a magic carpet. The Mario bros. ask the genie to help them fly. She is soooo unsurprisingly unable… and Toad suggests a used flying carpet lot! The group tracks down Koopa and when he sees them he releases the Princess from his carpet into a pit of quicksand. The brothers hear of this news and race downward from the sky to land in time to save the Princess and Koopa calls in pigeons. The pigeons are redirected by Luigi when he speaks to them and informs them of the tasty possibilities probably contained within Koopa’s Carpet. The pigeons do their job and the genie is now with Koopa who vows never to forget the incident.

It is interesting that as a New York plumber Luigi would know the indigenous tongue of the birds while the BIG BAD scoundrel King does not have the time to delve into the dialect of the minions he himself has dominion of. This animated episodic content handled allegorical social issues while also appropriating the story of Aladdin, Bravo.
The moral to be mindful of due to this episode is perhaps as follows: Never trust a palace with a flip top roof?

Back in the live action world…refreshments are necessary for the incoming football star, so Mario and Luigi leave after preparing a grocery list. Lyle shows up and Marianne and Luigina soon arrive. The two female cousins are the two actors dressed as female cousin characters (Lou Albano as Marianne and Danny Wells as Luigina). 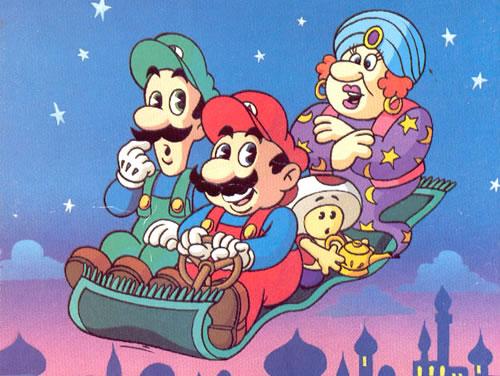 Mario and Luigi's irritating female cousins come to visit but end up spending the time flirting with Lyle Alzado.

Images from this Live Action Sketch