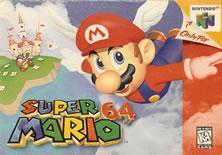 Introduction
Super Mario 64 is a great game with pros and cons. It full of great graphics, good soundtrack but, hard control and a lot of frustration. I got Nintendo 64 on my 14th B-day. (My B-day was March 29. I turned 14 in 1998.) My dad got for me with the game Mario Kart 64. He hooked it in a week later. The day after it being hooked in me and my dad bought Super Mario 64. I first sat down and read the instruction booklet.

I went through everything carefully trying to understand. I was used to the controls already because at that time I was obsessed with Mario Kart and knew how to handle the controller. so, that was easy. What was hard was figuring out that A meant JUMP. B was so many different things and that Z...well, Z was confusing to press.

I would keep the booklet in front of me and try the cool moves in the front yard. It took me TWO days to figure out how to beat the Big Bob-omb and it went uphill from there.

Graphics: 9 (out of 10)
The graphics are amazing! (Maybe because before N64 I had a game system in 1-D.) They put Mario in perspective in such a way, I have dreams with Mario and the gang in it! My mom once was watching me play and said that Mario was very athletic. That's true and the graphics prove it. Here's my list of

Pros
1. Mario seems like a real guy! Until, you realize he's made of square edges. 2. Compared to Yoshi's STORY this has really, really great graphics! (Sorry, Yoshi lovers.)

Cons
1. For some reason, sometimes a wall or rock is cut off looking like a light blue flat pool of water. 2. It's TOO realistic! I get little creeps in the night with Bowser in my dreams. About his fire mouth and having dreams about how bad Bowser's breath must smell. 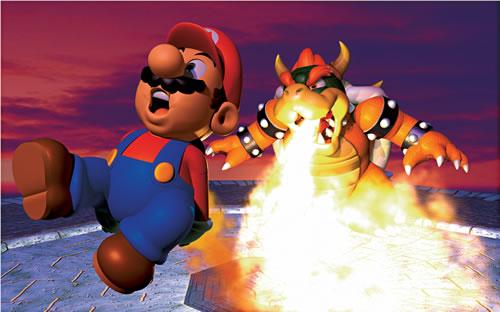 Music
The music is AWESOME!!!!!!! The music gives you the feel of the place. In Leathal Lava Land and the Desert World (It's level 8. I forgot the name!) you have a feeling it's mysterious. In Bob-omb Battlefield you have a feeling of an easy little nook. In my opinion my favorite level's music is Hazy Maze Cave. (Level 6) I love that music! It feels all weird in there. It has that metallic feeling to it.

Sound
The sound really adds a realistic kick to Super Mario 64! In my opinion you don't need a Rumble Pack for Super Mario 64! You have the sound! Mario doesn't say much but, here are some sounds Mario DOES make: **When he falls asleep he snores!**
**After a while of Mario dozing you might here him sleep-talk! He says, "Ahh, ravioli." "Ahh, spaghetti" 'Ahh, fenachitti"** **When you lose a life in a level and you are booted out of the painting you hear, "Mama Mia!"** **When Mario falls from a level he have this scream that is SO annoying! "AHHHHGGGGGGHHH!!!!!!!"** The sound of him squishing things, the banging the head on blocks, tiny foot-steps and hearing his belly's friction with the surface when he's sliding are only some really great sounds that are included in this game.

Game Challenge: 7 (out of 10)
The first level was a breeze. So, was Whomp's Fortress. Princess's slide...a snap. But, progressing through the levels they get harder. You need to use more of Mario's fancy moves to get through. Some ARE easy, some aren't. I haven't finished the game yet! I only got 27 stars! But, I still got a decent review on challenges. On Cool, Cool Mountain was challenging at first but, now it's moderate. Some levels need a touch-up on difficulty. Others are fine as they are. Others are TOO hard and need to be a little easier. Where are the little kids? I got a 7-year-old sister who is obsessed with Super Mario too!

Game Play-Fun (9 out of 10)
This is a fun game, but, not the funniest. I happen to like Goldeneye more! This is my fun list of N64 games I've played. From funniest to least funniest.
So, number 1 is the funniest in my opinion: 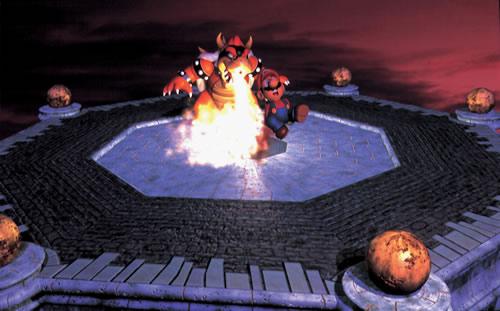 Replayability: 4 (out of 10)
Replayability is low. It's a frustrating game. I got past Bowser One with pure luck. I try again I die. The winning can be based on luckiness. The levels are hard to repeat. Minus 2 fun points. Frustration makes the replayability low also. People get VERY frustrated (Especially me) in this game. Minus 2 fun-points. The longness of the game is tiring. Minus 1 fun-point. Repeating levels OVER and OVER to get a star. Minus half a fun-point. Too much stars have to be collecting. That's pretty bad. Minus half a fun-point.

Super Mario 64 2
If they want to make a sequel some certain things MUST be included. It should be able to have 2 players. Mario and Luigi. This would make the game funnier. If one dies there's a back-up. Besides, it's funnier with two! It must have a better storyline. The princess is always kidnapped! Something has to be changed! Good music can be recycled, but, a storyline can't! They must put in more thought into the storyline! They must work on about pictures being cut off. It's VERY annoying! You think it's clear and suddenly the enemy shows up! It's extremely frustrating! Let's hope if a sequel is made these changes shall be included. Other things should be fixed. Like the difficulty of the secret stars.

Overall: 8 (out of 10)
Overall, the game is okay. Just the pros and cons can affect big-time. The game is basically good. It has great graphics and sounds and is fun. It's frustrating and is difficult. I DO recommend it.