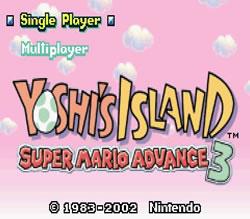 In 1995, Nintendo decided to craft a new Mario tale, telling of the origins behind our beloved Mario and company - Super Mario World 2: Yoshi's Island. Using the new Super FX2 chip, this game's stunning graphics and unconventional platform gameplay captivated SNES players around the world. However, caught up in the whirlpool of the new 32-bit Playstation, it may not have received the attention it deserved. Now, in the third installment of Nintendo's rehash series, Mario Advance, Yoshi's Island is back.

Perhaps the first game in the Mario series not actually starring Mario, this game focuses on his extended dinosaur family, the Yoshis. The story is thus: the stork (keeping in line with Nintendo's policies) was carrying both Mario and Luigi to their parents in the Mushroom Kingdom, when a dark shape came hurtling toward them in the sky. Namek the Magikoopa made a grab for the stork, and with a fistful of feathers, made his way back to his fortress. To his chagrin, he realized that Baby Mario had somehow been lost in the confusion. Baby Mario had fallen down, down, and landed unscathed (I guess he had a bit of padding in his diaper) onto Yoshi's Island. The Yoshi family discovered Mario, and being the bunch of kind-hearted dinosaurs that they are, they agreed to help him find his lost brother and find him way home. Thus, Green Yoshi and his multi-colored brethren embark on an epic journey! 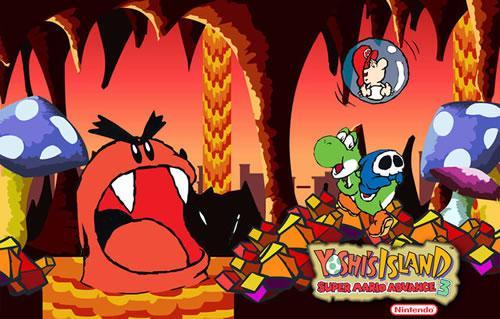 Though the game can and does play like a standard Mario game, many things are new to the series. As noted before, you control one of the many Yoshis, with Baby Mario riding on your back. If you're hit, Baby Mario will fly off your saddle, floating in the air in a bubble. You have ten seconds before Kamek's henchmen come and carry him off to the castle, and your game is over. Yoshi himself is nearly indestructible, except for falls off the screen and spikes n' stuff. You can increase the 10-count by finding stars all over the level, to a maximum of 30. Yoshi also now has the power to make eggs from enemies and shooting them, using the R button. A cursor appears, giving you a 135-degree range to shoot in. Though egg tossing may seem a frivolous and useless addition, it is essential to gameplay and is implemented in nearly every level. Mystery Clouds (floating clouds with little question marks on them), when hit with eggs, do a variety of different things; they can create a wooden platform, release an item, or reveal a hidden area.

The Super FX 2 Chip, a special processor used for this particular SNES game and never used again, is quite impressive. Featuring extensive sprite manipulation capabilities, enemies and items morph and grow and shrink and stretch all over the place. Of more note than the technical statistics of the graphics is the style with which they are presented. An unbelievable, painstaking style has been put forth into this game, and every bit of it oozes with flair. Foregrounds and backgrounds are given a pastel, almost coloring-book-like quality to them. Backgrounds, some even created for the special use of one stage, make incredible use of parallax scrolling and other various techniques. Many objects in the game are actually in full 3-D, using the polygons and light-shading abilities the Super FX 2 Chip has to offer. The game's unique visual presentation is truly something to behold.

In the audio department, Yoshi's Island gets the job done. Stage tunes are not extremely varied and are used over and over, but aren't too tedious or repetitive. You might even find yourself whistling one or two. Sound effects are much more impressive; Yoshi's voice itself was directly lifted out of the N64 game Yoshi's Story to replace the older version. Other sounds are done well enough, and the sheer number of them contributes to the massive game world.

Speaking of massive game worlds. Despite the fact that Yoshi's Island has less stages (48 regular and 12 hidden) than did the original Super Mario World, this game WILL take you longer to complete. Stages can be very long and complex (especially the hidden ones) and can be daunting to one not adept in the platforming genre. There are no ''second goals'' as in the first Super Mario World to unlock new stages; you'll get six immediately when you beat the game, and one of six levels, all new for the GBA version, to play if you can get 100% in one of the six main worlds. These levels can be extremely diabolical in design, so some definite Mario ''skillz'' will be needed. How do you obtain 100%, you ask? What is there to do besides beat the level? Well, Yoshi's Island uses in ingenious point-system, adding about, oh, I don't know, 20 to 30 more hours of playing time onto the main game. The purpose is to end the level with 100 out of 100 points possible, by collecting 5 flowers (located in hard-to-reach spots throughout the level), 20 red coins (indiscernible from the normal, yellow coins all over the place without the use of a special item), and a full 30 stars. This makes even easy levels a massive challenge, but I've never had so much fun stomping posts and shooting enemies, looking for that last red coin. A true achievement in replayability.

Returning from Super Mario Bros. 3 is the ability to collect and use items throughout your journey. These can be found in any of the minigames scattered throughout the island; there are 12 in all. Six can be unlocked, the others have to be played in locked doors in different levels or at the end of a level, where depending on the number of flowers you've collected, you'll have a 0 to 50% chance to play a random mini-game. Most are highly enjoyable, though it is regrettable that these were not made multiplayer compatible. Heaven knows I want to play Seed Spit with my neighbor. Items range from +10 Stars to Machine Gun Melons to POW Blocks and such. Using these effectively is critical to obtaining 100% on every level, so you'll be wanting to stock up. 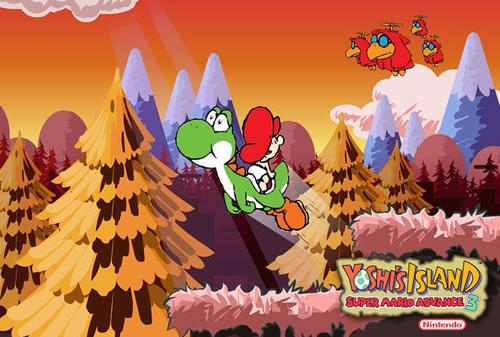 Perhaps the most amazing feature of Yoshi's Island is not its mind-blowing graphics, or innovative gameplay. It's the level design. Back in the day (1995, anyways), the best minds in the business were working in the 2-D field, not the 3-D geometric and polygonal messes we see today. I can't stress enough how well thought-out and constructed these levels are. Puzzles are imaginative and of perfect difficulty, mazes are so well designed that you'll be laughing in delight when you finally understand how to get through it. Everything has a purpose; everything is there for a reason. Boss battles are nothing short of epic, with a normal enemy being transformed by Kamek into a mega-version of itself. You'll need a distinct strategy for each one, and none will disappoint. (Raphael the Raven is still the greatest boss-battle EVER, no matter what anyone says.) Hidden areas and paths litter every stage, tying right in to the theme of the level. The secret stages are devious and cunning in their layout. It needs to be played to be believed.

So what about multiplayer? For reasons still unknown, Nintendo decided to stick the same old game into SMA3 as they did with the previous two installments, Mario Bros. Arcade. This thing is OLD...this thing is BORING...not worth it at all. Those mini-games would have been great for two-player head-to-head matches...oh well...nothing's perfect.

As for change from the original, there isn't much. The ''Touch Fuzzy Get Dizzy'' effect has been slightly downgraded, as has the music; very minor level and 100% completion tweaks have been implemented to give the game a more cohesive feel. The biggest difference is positive; those six new levels exude pure brilliance.

Though Yoshi's Island is indeed a remake, the game retains the originality and personality that set it apart from the crowd those some-odd seven years ago. If you've never played this game before, smack yourself many times, and go out right now and buy it. Dare I name this game the best 2-D platformer of all-time? Hell yeah. Though only the most hard-core fans will buy the game if they already own the SNES version, there's a certain thrill about battling Sluggy the Unshaven (yeah, you heard me) during 4th hour Chemistry. Proving that 2-D gaming hasn't left the hearts of the gaming public, SMA3 is the freaking bargain of the year at $30.00 or less. Buy it. NOW.