Take Doki Doki Panic, shove out their main characters, add a different storyline, add the stars of the Mario cast, rename the game and put it onto a NES cartridge.

You have this game, one of Nintendo's finest side-scrollers, in overnight hacking time. Because that's exactly what this game just actually is. But it's not all that much of a success to the public as was the first Super Mario Brothers the prequel, or the sequel, but I would admit, this game is quite underrated. It was a step-away from the original Mario formula...has Mario lost his touch?

So, Nintendo did not want to release their version of Super Mario Brothers 2 (otherwise known as SMB2j or SMB: ''The Lost Levels'') in America or Europe. Being 1986, Super Mario brothers was still the hottest game around, along with Miyamoto's other classic piece Legend of Zelda, but only Japan got to taste another great game. So it was Nintendo of America's turn to make a Mario game. Circa 1988, they take a Famicom Disk System game, Dream Factory: Doki Doki Panic, and switch a few things around, and voila, a successful game hits the market in instants. It just goes to prove that the name of a person in a game can make so much more for the ratings...

The antics of SMB2 were a step-down from the original ''run-jump-stomp'' formula of Super Mario Brothers, SMB2j, and SMB3. Instead, Mario, Luigi, Toad and Princess Toadstool are venturing through the Subcon world while plucking up vegetables, chucking them at the dream-monsters and climbing vines, clouds and digging their way through pyramids.

And just like I said, Mario, Luigi, Toad and Princess Toadstool. As they have joined the brothers in their quest. At first glance, you could simply take one look, and just immediately exclaim ''OMG WTF LOL''??!!?! Why would Toad be in here? After all, he couldn't be in Tetris as he'd be crushed by crushed by a block. And Princess Toadstool, heh, she was helplessly kidnapped last time. What makes her think she'd be such a good hero?

As a matter of fact, your judgments are far from conclusive. Toad and Princess Toadstool are only as good as everyone's favourite Brooklyn-born-Italians. Toad has strength and speed of a track-and-fielder and bodybuilder mushed into one. And the Princess' jump is excellent, she's one of the best characters for beginners.

So prepare for the ultimate hit-or-miss of Nintendo's Mario series, which seemingly turned out well for them... 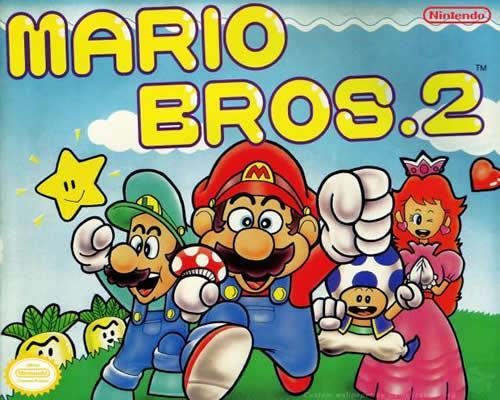 Super Mario Brothers 2 is a massive success, and not even original, only with their characters and name, massive gameplay and fun could it have been such a massive hit. Each level, exciting as the last, can possibly be called the greatest levels of each of the Mario series games on the NES. Super Mario Brothers only had its simple overworld which was all one scene throughout the entire level. Or sometimes little underground/water sections. But in Super Mario Brothers 2, you can get caves, caverns, waterfalls, warehouses, ice caves, and our general overworld grass levels, all shoved into one world. You can climb. You can traipse across the terrain on an enemy's head. You can fly across vast gaps on a Pidgit's magic carpet. And all you could do in the original was move, climb and go down pipes. A big improvement in the gameplay.

The controls are top-notch quality. Each button has simple functions, yet the characters are more versatile than ever. You have jumping, running, super-jumps, entering doors, picking up & hurling objects and enemies. Each character has their own unique ability to make them good for certain stages, and better choices than others at times: Mario being the most well rounded is good to use just about anywhere. Luigi has his awesome jumping ability to cross big gaps and reach high places, Toad with his awesome speed and plucking ability, and Princess with her great float. And the good thing is that ANY character can complete ANY stage.

The all new items and enemies of the game are good enough, to say the least. Nintendo kept the same enemies, although it could have been technically possible to translate them into Goombas, Koopas, and even make Wart into Bowser. But it would have been ridiculous I suppose, as they were stomped in the previous game, so it would have been more confusing if they were put in here. Although some enemies were used again in future Mario games, for example, Birdo being in Mario Tennis.

Moving onto storyline. Super Mario Brothers 2 has a completely new storyline, different from the one of Doki Doki Panic. In the original, we had our four main characters, Imajin (representitive of Mario), Mama (Luigi), Papa (Toad) and Lina (Princess) who travel into a storybook to rescue their lost kids. Rescue the kids in a trapped book. What a boring storyline.

Now SMB2 cuts in. We start with Mairo having a dream. He's climbing a staircase and enters a door at the end. He's in a strange dreamland. He hears a voice that calls to be freed from Wart's spell. Then POOF. So Mario and the gang go for a picnic, and find a cave and travel to the top of a staircase and see the same dreamland that Mario envisioned earlier, and they are ready to save the world of Subcon. What a storyline. It's built up of three different parts, and a better build-up to the game than DDP's.

The sound of SMB2 is low-toned but clear and surprisingly funky, particularly the overworld theme. But the soundtrack range is too short and limited, and this was a bad factor. The sound could have been improved, and I liked the SMB themes much more. Yet, SMB2j used the same music as SMB which meant repetition, so a change of music was a good thing too.

The sound effects are wierd. They certainly don't sound proper. Throwing a vegetable makes the kind of sound a ringing cordless phone does. Some sound decent, and they can't be annoying if you try to get used to them.

The graphics in the game are to put it, not the best I have ever seen. I've seen better NES graphics from games the same year. Like Castlevania. These blue outlines of characters are terrible. The background were rather basic, but the enemy drawings were fine. However each character is identifiable, and the shapes and obstacles are clear and smooth.

With 20 esciting long levels to play, who didn't say the replay ability was low. And you have 4 characters to play through the game as, and find your overall game stats after completing the game, and completing with all 4 characters to get the main ''hero'' is a fun thing to do. You can complete the game quickly too if you cannot be bothered to do it all, so this is very well. With great gameplay you'll be playing it over and over.

Buy or Rent? - I'd go for Buy at all costs. This game is rare, and is certainly a great title to have within your collection. Funcoland, eBay or a car boot sale is a safe bet. It is better to go for than Doki Doki, which is far too stale and rare within America anyways.

Overall, SMB2 is a worthy magnificent title within those in the Mario series. It's been around for 15 years and is rare. If you have a NES, I'd go for getting this game. It can be called a classic, but yet it didn't compare to SMB3. But that's another story. ;) All aspects are above average, and does indicate that you won't be disappointed. 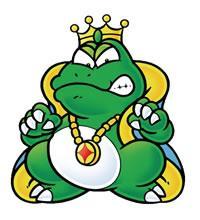 This is the creme de la hacks. Not even being original, you could say it was better than its predecessor, but one thing is clear - Doki Doki Panic is only as good, or this game wouldn't exist, because of it. A great move for Nintendo, and a big thumbs-up for making this masterpiece of a hack!