***
gplus
Digg
Gshare
Reddit
facebook
Pin It
twitter
Yeah, I know how ridiculous the concept of this article is, since the Mario series in general has no sense of canon or continuity, but still, the Birdo gender stuff, the parts about who Wario and Waluigi are and the various other misconceptions and mysteries are getting more than a tad annoying.

Mario's Place of Origin and the Setting of the Series

Okay, I'll say this once, and only once. Mario is not from Brooklyn. Seriously, game canon likely overrules spinoff canon, and this general fanon idea is way, way too popular with the Mario fanbase.

Indeed, let's see the ending of Yoshi's Island again. Does the place Mario and Luigi are brought to even remotely resemble the real world? It's fairly certain it's the Mushroom Kingdom here. But yet so many people still cling on to the completely non supported in game Brookyln stuff, and I've even seen some claim Yoshi's Island isn't canon because they prefer the cartoons. Good grief.

Did Mario and co from the real world? No. Did they visit Earth? Possibly, but there's no solid evidence in favour or against them spending more than a few days or so there.

As for games taking place where, I thought I'd come up with a list of each game and spinoff and where it likely takes place:

Some however are slightly harder to locate. These below series could be in either place:

Donkey Kong/Donkey Kong Country: Could be either. Many say it's Mushroom World somewhere, some say it's Earth or another non Mario like planet because of shared elements in Banjo Kazooie and Conker series (aka DK references in pictures, Gnawty, reuse of Banjo Kazooie beta level in Donkey Kong 64, Diddy Kong Racing). Oddly enough, Banjo Kazooie Nuts and Bolts actually features both Peach's Castle and Ghoulhaven Hall (right spelling? It's from Grabbie by the Ghoulies) in the background of Showdown Town, and references by the Lord of Games.

Mario and Sonic series: Third Mushroom Kingdom, a third wherever Sonic lives now (Earth A?) and a third in the real world (where the realistic style events take place).

Mario sports handheld games: Some references to Mario being a legend indicate setting in Earth, but geography resembles Mushroom Kingdom.

And for the random stuff... Club Nintendo took place in many different Nintendo universes, the Super Show and other cartoons were both in the Mushroom Kingdom and Earth, the movie was also split between them, as was the anime movie. The manga was probably set in Mushroom Kingdom too, as were the other comics, books, etc.

And if you count them as canon, Mario is Missing and Mario's Time Machine took place mainly on Earth.

The Ice Capades are probably not canon:

Special effects, so awful they burn! This really is the worst costume stuff you can possibly imagine...

Did PowerPoint make up Japan's entire animation industry that year? or were Nintendo being cheapskates?

A freaking species, like how Yoshi is a species rather than single individual. The one from Super Mario Bros 2 is male, the one from many later Mario spinoffs is probably female.

Captain Rainbow had you find something to prove it's gender though, which was... well, do you really need to know?

It's called a mysterious object. Somehow, I really don't even want to know what that means.

Mario is the same Mario from the arcade game...

Yeah, there are lunatics online who actually believe Mario's some ancestor of the guy called Jumpman, because they can't figure out that apes don't age at the same rate as humans.

But in practice, all evidence points to it being the same plumber in all the games he's in, not a descendant. For DK, he's not the same as the arcade one, and both Cranky Kong himself and the game's manual actually state this. Indeed, have a screenshot: 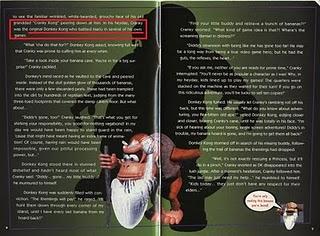 Does the above not make it as clear as day? Heck, what of the intro here?

Note DK dropping his ultra modern boombox on Cranky's old record player which is playing the arcade game's theme tune. Out with the old, in with the new.

Sadly, good luck convincing some Nintendo fans that there's one Mario and two DKs. Or some of Nintendo for that matter, since while Donkey Kong's games and Smash Bros points out the current DK is merely a son of the original, apparently Jungle Beat and Mario vs Donkey Kong makers didn't get the memo and completely made him act out of character for it.

The Identities of Wario and Waluigi

No, they've not cousins. They may or may not be brothers, depending on whether you think the 'Wicked Bros' thing from Mario Party 5 is their actual name.

But who are they? Good question, there are two possible origin stories.

One, in Club Nintendo has the really, really unlikely situation where Wario is an evil clone brought to life accidentally by Dr Light from the Mega Man series. No, really.

Above: So Wario really is Mario's Shadow the Hedgehog. Oh ***, he's got a motorbike. And is an anti hero. Just hope he never gets various guns and weaponry and ends up in an emo love plot.

There's the other one, where apparently Wario is a childhood friend of Mario who turned evil after being mocked and made fun of, like your standard video game rival. Think like the rival in Pokemon or Porky in the Mother series, and you've got a good example. As Mario wiki says:

Wario especially hated playing cowboys with Mario, as he would always be the rustler who would be captured by "Sheriff Mario" and locked away.

Or as also said, for some kind of disturbing scale (really, did kids think about their childhood this much anywhere in the world?):

I'd say the latter is probably more likely, but the cousin idea isn't such a bad idea.

The Japanese Canon is Always Right

Another sadly common argument online, and something which is getting a tad annoying when talking about the Mario series in any sort of depth.

But since some people want reasons why this is silly:

If there was no translations, Mario and Luigi would have never got their names. Nor would Pauline.

You'd get some fairly dull translations. Fawful, the 1337 Hammer Bros, Fracktail, Dimentio, etc have had massive changes to their dialogue in the localisations.

The Koopalings would be not named and called 'Bowser's Minions'. 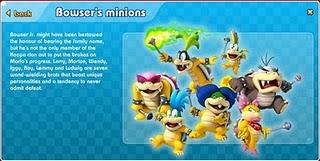 Think of the Koopalings!

You'd have got a mission pack sequel instead of Super Mario Bros 2 and the series might be dead.

For the matter, none of the adaptations are more or less like the series than each other, regardless of origin. The Mario movie is pretty bad, but so is the Great Mission to Save Princess Peach. Or the anime films.

An odd one here, but Shigeru Miyamoto did not hate Donkey Kong Country. Yes, that infamous, annoying quote keeps popping up online in the discussions by ill informed hardcore Nintendo fanboys disillusioned with Rare for some reason...

But it's not true. Remember, at the time, Miyamoto was making Yoshi's Island. And Donkey Kong Country was doing fantastic, so the executives wanted him to make a game with a similar style of graphics. Note the pre rendered graphics in the intro? yep.

So basically, he was annoyed because he was forced to make a game like Rare's, and made the style really cartoony and rather hand drawn style as a reaction. And for that matter, Yoshi's Island ended up selling quite a bit worse than Donkey Kong Country, which can't be good for the esteem.

Donkey Kong country: About eight then four and a half million copies sold.

But let's put the myths to rest. Indeed, first thing to think about is that it was Miyamoto who suggested the games to Nintendo.

The first point that I want to make is that I actually worked very closely with Rare on the original Donkey Kong Country. And apparently recently some rumor got out that I didn’t really like that game? I just want to clarify that that’s not the case, because I was very involved in that. And even emailing almost daily with Tim Stamper right up until the end.

So yeah, there's no secret Donkey Kong Country hatred at Nintendo. Sadly however, there seems to be a lot of unjust bashing on sites like IGN, which is just not on. Bunch of cowards, saying how they loved the game when Rare was around but after turned on it.


Who is the Koopalings mother?

Bowser's wife. Or someone Bowser had them with. According to Official Nintendo Magazine the character is called Clawdia Koopa.

There's also a picture from a comic showing Bowser's school yearbook which might be of the character. 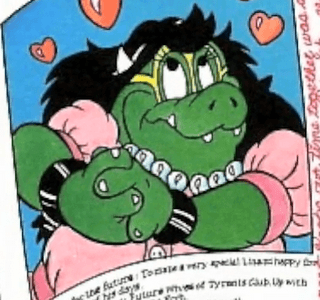 Now with those silly mysteries solved, who's up for some Mario Kart? Just enjoy the games, play Donkey Kong Country Returns and the likely New Super Mario Bros 3DS when it comes out and stop worrying about silly overdone mysteries.

Canon, cannon... Ganon... funny enough we've had all three in the Mario series.