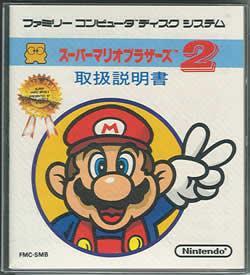 It might of well be common knowledge that the Super Mario Bros. 2 that we got was not the "true" Super Mario 2; it was a re-skinned version of a Japanese game that was know as Yume Kōjō: Doki Doki Panic, intended to tie in with Fuji Televisions's media expo, Yume Kōjō.

Starting from the title screen you are greeted with the option for playing as Mario or Luigi, a feature not present in the predecessor. Luigi jumps higher than Mario, and he also has less ground friction. Unlike the original, you have no option of choosing multiplayer. After choosing your option, you are presented with the first level, retaining all of the side-scrolling features of the original. In this game, there are eight worlds, along with five bonus worlds, the letter worlds. The letter worlds are achieved by beating the game eight times, and then hold down A and Start. Needless to say, this is a difficult challenge. There are three more elements introduced in this game- the poison mushroom, mid-air wind gusts, and backwards level warps. These are all bad, and that is part of what makes this game so difficult. Other than that, it is essentially the same minus level designs.

"What makes this so difficult?" I assume you are asking. The counter-productive warps were the death of me playing this, along with the invisible blocks DESIGNED to troll you. There may be a easy two block jump, but if you hit that invisible block, you are sent down to your doom. I see this as a continuation to the original Mario; the levels act like if there was a World 9 in the original and you had kept going.

Overall, I recommend this game to anyone who thinks they have mastered the original. With all of the added difficulty in this game, this is an immense challenge, and in order to 100% it, you must beat the game at least 24 times. Getting ahold of this game in

cartridge form may be difficult, but it is available on the eShop for 3.99, if you are up for it!