Hello! Big update on my latest work, but in order to appreciate how far I've come in only a month, please check out my previous article. http://www.superluigibros.com/introducing-super-mario-cgi 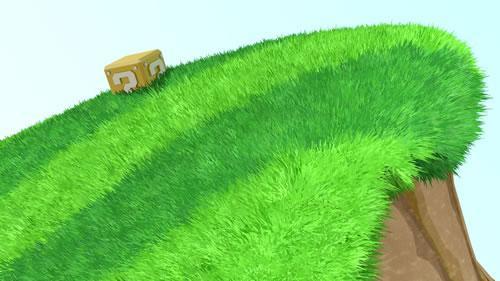 Final Render: 'Toon' - relying only on a basic specular reflection to determine the 'depth'

Please Note: This is NOT, I repeat NOT a Video Game. This is an animated series that will, in turn, turn up a lot like the animated Smash 4 trailers, but with
the plot, style and innocence found in memorable titles like Paper Mario or Super Mario 64.

I grew up with things like the Super Mario Brothers: Super Show, and while it wasn't 'great' ..like at all. - I still admire the show for it's impact on me.

In the past short weeks, or even days, I've gotten a lot done, and have made great milestones in what may eventually turn up to be my animating career.


I would love to get really in-depth, but the amount of work that goes into something like this is.. overwhelming. I may make a tutorial on a few elements, but other than that, it's really just too much to explain.


Let's start of with progress on what I teased very briefly in the last article.

I originally was going to simply re-create the entirety of the house from Paper Mario, and while it maintained some of the style, I used the one from 'The Thousand-Year Door' as a template, and used other renditions from the other games too.

Various inspirations, all obtained via MarioWiki.


The House is far from done, I just a lot of work done on it. I have to find or paint new textures, and work out how it'll eventually look complete.

Here's a comparison between the N64 version and the latest render.

Current-ish progress on the house. Still have a ways to go, as displayed below 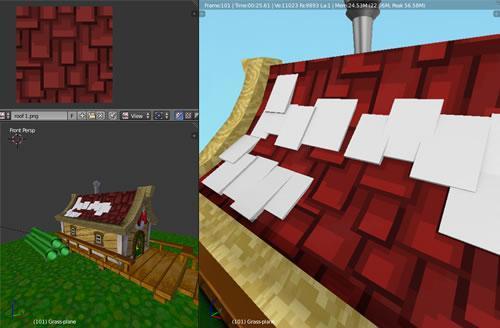 New zig-zag variant of Mushroom Hills:
​While exploring the files inside of World 7 in NSMBW, I located an alternate Mushroom Hill pattern seen only in 3d within the sky levels.
-Low resolution 2D sprites are used in World 1 instead, not knowing where they were, I eventually located them by replaying game levels in coin battle.


Ok.. this is is where it gets awesome! After re-watching the Smash trailers, I decided that if I was going to make an CG Mario series, I'd need dynamic grass. This is a field of animation I'd never even attempted before, so I put it off.. maybe I don't need it. I thus began work on the majority of the project.

After I made great progress with the storyboard and world design.. A few people called out the grass texture as bad, or needing to be redrawn. I had planed on simply replacing with an HD texture.. but I decided to give that idea about dynamic grass a try.


Obviously stuck, not having any experience making something dynamic in this way, I used this tutorial by BlenderWiz via YouTube.

I didn't follow it through exactly, as I wasn't looking for the exact results his technique made out. But using most of what he'd done, I created a basic grass formula.
This was the first time I attempted anything remotely 'particle system' related that ended up turning up successful.

Using a basic particle system of hair, by changing the length and color, I got what actually took an appearance of grass.

My first ever render with the grass, just a few hours after following the tutorial. 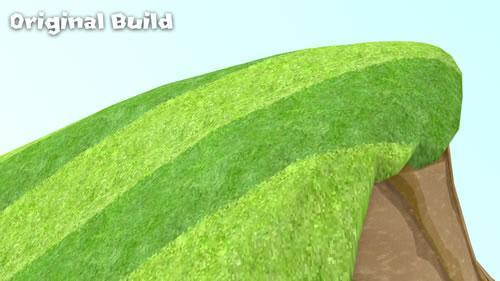 It was quite an improvement.

Afterwords I played around with the material 'ramp' values, teaching myself how the system works, trying to find that 'sweet spot,' y'know.

After I got the feel of it, I wasn't quite sure of what my base should be.. I remembered seeing some amazing grass in a screenshot from the beta version of Mario galaxy, I then found the image (pictured,) and worked from there, and began experimenting. 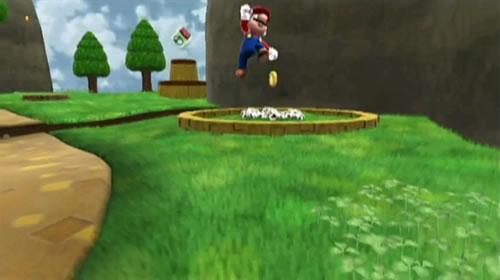 Evolution of the early designs

I can't really explain each photo too in-depth, so I'll just give each a short overview.

Original - slightly modified​; I added a modification that made the height differ between the strands

Although the grass was starting to look great with the depth and color, the dimensions were very odd.. I began fiddling with the various settings and
actually found a scale that allowed for each individual particle to have width on a single face, causing it to have a wide base, making it look more like
grass than hair. -Still using the original low res texture.

While it wasn't apparent through the images, the texture overlay caused problems: if two colors were too similar, they would blend.. as the main color in
the shading texture was a plain green. So I made several modifications trying to find a way to make the two shades have contrast, while maintaining depth.

The two final designs, the first matching the realism Smash trailers.. close enough, while maintaining a Mario style. Dubbed 'Indie Version 3' or 'Stylized Realistic.'
The second ended looking similar to the art-style from Skyward Sword, Zelda U or Wind Waker. Dubbed 'Toon' and 'Watercolor,' despite that it actually maintained the very same technique used in the very first grass render I made. - Now using an HD texture.

Toon - No false shading, all shading is based on the specularity of each grass stem.

So yeah. All this literally took place like within the last three days.. as of me writing this. 'Been making real progress.

I said final two versions, as I'm not yet sure which one is better. - I like both in their own aspects, but I have to settle eventually.
So I did a quick poll, but I'm not certain if the majority voted for 'Toon' because of appearance, or for the title.

I plan on trying one more time when I get better render results.

I do have to admit.. toon has grown on me. From a distance it looks very nice, - Like I said before: reminiscent of Skyward Sword or Zelda U's art style. 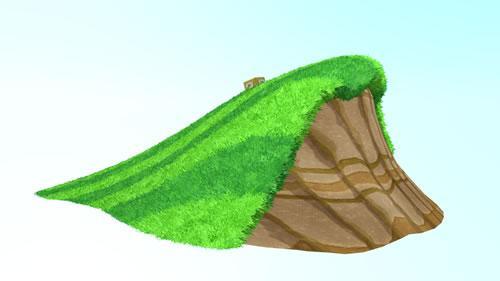 So far it's been trial and error with the graphic design, now's where that 'dynamic' part comes in.


Sorry if all that was all long-winded, it's like the biggest achievement I've had so far, I'm still can't believe I'm doing all these things myself.. so I kinda wanna explain all of it. Even though I really can't, ..you wanna see all that programming? lol Seriously.. Seventeen. Nintendo, PLEASE.. hire me! or- something!
--------------------------------------
Well I think that's all the new info I can give out at the moment. I also drew up quite a few storyboards that I'll publish and color soon, I'll soon release a video or two on the grass process shortly-ish, and maybe I'll try my second attempt at a Mario rig.. my last one didn't go so well.