Mario games almost always brings backs the memories of childhood, if you were brought up in the 80’s and 90’s. Sonic was the reason most of gamers brought the Sega consoles and Mario did exact same favor for Japanese Nintendo consoles. Among the tons of variations that followed Super Mario Bros in the Super Nintendo Entertainment Systems (SNES) era, a few were improvised for racing game lovers.

Super Mario Kart, one of the earliest kart game predecessors made it possible to enjoy the enthralling racing games with your favorite Mario game characters for the first time. Topping the tables shortly after its SNES release in 1992, the game deservingly earned its re-release in Wii gaming consoles in 2009 and in Wii U console in 2013.

From the Super Mario Kart manual

Hi everybody! Thanks for dropping to by the Super Mario Kart race track. My name is Lakitu, I run this track. If you need my help, I'll be around.

We race one seater, metal pipe frame go carts here. There are two engine sizes to choose from: 50cc or 100cc. All of the go carts are more or less the same, it's the individual drivers that make the difference when it comes to winning. Each driver has their strengths and weaknesses. Try using different drivers until you find the best one for you. 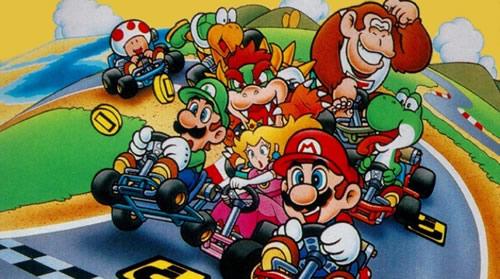 The SNES game is available in four different modes with two of them supporting two player gameplay.

Mario Kart GP
This single player mode allows you to race against seven CPU players in a 5 Course Trophy. Six CPU players are generated in case of two player gameplay. Top four finishers are awarded driver credits with top finisher ending up with 9 points, first runner up with 6 points and lesser points to third and fourth finishers. This is the default mode of Mario kart, hence filled with lot of fun.

Time trial:
This is a time based mode where a single player plays without competitors. The aim is to finish with the lowest time score. Fastest five times are recorded in high score list or typically goes down the mini Hall of Fame. The fastest Mario character for each track gets to be used by default. This is a classic alternative to helpful training mode.

Vs. Mode:
The ‘Vs’ mode fits as the gameplay where you can get back at your older sibling. It helps compete against your BFF without any other computer generated racers joining the race. You are free to choose the racing track as per your preference. Obstacles come in the form of sliding black objects which makes your kart to spin and lose time. Thanks largely to SNES console, you can keep tract of win-loss record amongst two players.

Battle:
Unleash the Spartan in you against your opponent in battle mode. Every player has 3 balloons during the start of race. The first player to pop out all three balloons of his opponent becomes the victor. There are four sets of selectable squared tracks for this mode. The balloons popped could not be recovered. 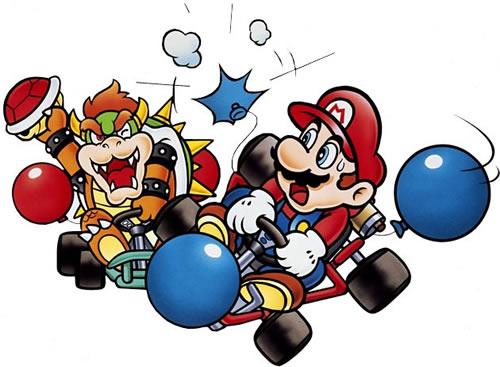 Mario Kart encompasses 20 game tracks and four battle tracks. The game tracks are categorized into four cups. All tracks are numbered with Rainbow road as the only exception. The battle mode has four squared tracks to choose from. The squared tracks resemble the famous Pac Man fields where the race is intense. Race tracks reflect the stereotypical Mario themes, notably the one is Bowser castle. The track circuits range from sandy Mario circuit to grassy Donut plains to icy Vanilla Lake. Terrains vary from stone to chocolate to wood. Every track or circuit has different types of obstacles in them to make the race more challenging. Obstacles can spin you out, make you fall in pits, smash karts and hence cost time for the unfortunate racer.

Listed are the four cups in the entire game play:

The cup is represented by the giant Super Mushroom icon. Mushroom cup is characterized by shortest tracks in Mario cart games. It consists of four primary level race courses.

Star Cup:
Star symbol represents the challenging Star cup. Victors of the trophy are able to unlock the most difficult Special cup. The tracks tend to be longer with more boost pads and jumps all over the circuit.

Special Cup:
This is the ultimate trophy, defining the grand finale of Mario Kart games. The icon of the Special cup is a combination of symbols from Mushroom, Flower and Star cups. It has the vintage bowser castle to enhance course’s difficulty.

All your favorite Mario characters are back. There are eight different characters available to be chosen as drivers. The eight characters are divided into four sets with varying skills and parameters including acceleration, top speed, weight etc… Heavy weights tend to accelerate slow, nevertheless have an excellent top speed. The villainy Bowser and Donkey Kong falls into the heavy weight category termed as Showdown. The small guys include Koopa Troopa and Toad who are excellent at handling karts. Our beloved Mario brothers, Mario and Luigi are all-rounders with a middling capacity in all fronts. Princess Toadstool and Yoshi are speedsters with low control. 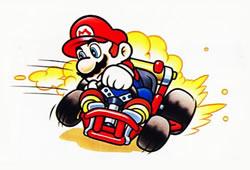 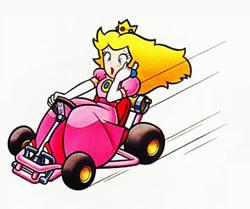 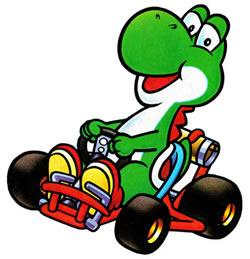 Peach and Yoshi looking calm and composed in their karts. 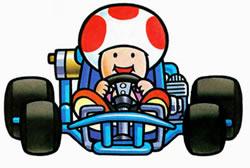 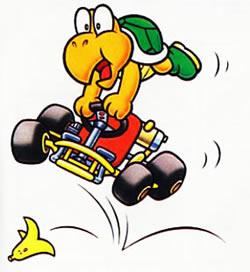 Toad smiling and Koopa Troopa falling foul of one of DK Juniors infernal Bananas. I feel for you bro. 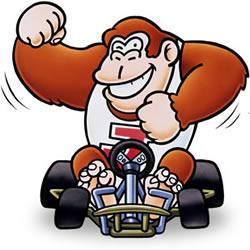 Panels all over the track can earn you items as you pass through them. Listed here are the helpful items you can get in gameplay:

Banana Peel:
Peel is a sneaky obstacle to spin your cart upon passing it and thus costs time in a race. It can be thrown backward as well as forward as a weapon.

Green Shell:
Upon hit, it sends your enemy to a kart spin. It is Koopa Troopa’s deadly weapon when he is your CPU generated competitor.

Red Shell:
Unlike green shell, red shell can be homed on target. It can be only thrown forward.

Poison Mushroom:
It causes victim to shrink when hit. A CPU generated Toad and dragon princess uses this item on opponents more often than not.

Dash Mushroom:
It allows a player to boost, thus can be used to slam your enemy. It comes in handy to help you drive over sand or grass.

Fireball:
It works similar to a green shell. This is Bowser’s default weapon, when controlled by CPU.

Yoshi Egg:
This is green shell version for Yoshi. A CPU generated enemy Yoshi slows you down with plenty of these.

Lightning Bolt:
Like poison mushroom, the bold shrinks you down to make you vulnerable to get squashed by medium sized racers. Lightning bolt doesn’t come into play in battle mode.

Ghost:
Ghost helps you run on stealth mode to assist stealing items from other racers. This cheesy item appears in battle mode only.

Star:
Star provides combined benefits of coin and invincible power. It increases your top speed as well as makes you invulnerable to any attack. This ultimate power belongs to CPU controlled Mario and Luigi.

Super Mario Kart received mostly positive reviews from game critics. It goes down the list as third best-selling SNES game. By the end of 2009, it grossed over the charts with 8.7 million copies globally. Game Rankings gave it an aggregate score of 93.60%. MobyGames concurred a similar 90 plus score. IGN described the games as the original karting masterpiece. It has topped the listing on several game review sites and forums for best karting games of all time.

Accolades:
Guinness World Records rankings had Super Mario Kart as table topper for 50 best console games based on initial impact plus lasting intensity on its all-time list. The game was placed 33rd in 200th GameInformer copy. A close 32nd place was what this amazing kart game got on “100 best NES games of all time” in its 100th copy released in 1997.

A playthrough of the Star Cup at 150cc

References in other games