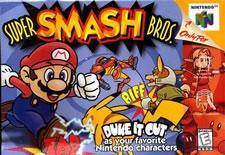 “Sad to see this classic being forgotten in all those years”

Many newbies may have called this weird for the happy-go-lucky company Nintendo to make a fighting game, where a bunch of happy characters go out and sock each other until the last one stands. Others say that it’s a good game, explaining how Super Smash Bros became a million-seller very quickly like its two sequels Melee and Brawl. If you think that’s wrong for Nintendo to do this to such good series, you’re wrong. Truthfully, this is easily a classic, despite being forgotten since the series progressed with Melee and Brawl. And even though you have a bunch of kids at home with an N64, you can recommend this to them as always. It’s action-y; It’s funny; It’s thrilling; Whatever you may call it, Super Smash Bros is a pretty good game for the N64.

The objective in this game is the same as a normal fighting game: Kill all players until you’re the last one standing. Unlike other fighting games, each player has a percentage gauge that indicates how far they will be knocked off until they finally eat the dust when blasted off screen from the stage. Percentage is increased you’re hit by another player or obstacle and same goes for other players. The higher the percentage, the more chances you will die and will lose a life. When a player loses all of his/her lives, he/she loses the match. It’s that simple. Also, you can jump just about anywhere in the stage as long as you don’t fall down and plummet to your doom in the void, like a platform game like Super Mario Bros. And each match can have up to 2-to-4 players at once, making this game more fun.

Like other fighting games, you have a wide array of characters to choose from. Be it: Mario, Donkey Kong, Link, Samus, Yoshi, Kirby, Fox, and Pikachu. The other four must be unlocked by playing through the game, so that adds up to a total of 12 fighters available in the game. Don’t tell me that this is a very short selection of fighters in a game because this is the first game in the series to do so, so cut it some slack. Also, each fighter has their own abilities to fighting, like Mario is well-balanced and Yoshi can jump very high in the air and Donkey Kong is very heavy to get knocked off.

Other fighting games require you to press certain button combinations to do a special move, but Super Smash Bros ignores that and makes special moves simple to execute. Press B to use a special move, B-Up to use another, and B-Down to use the third one. Mario can throw his fire ball by pressing B while Donkey Kong can spin in the air to fly with B-Up. Yoshi can ground pound with the B-Down move. Special moves are essential to this game, so your melee attacks aren’t the only things you’ll have to fight with.

If the Special Moves aren’t working for you either, there are items that randomly appear in random spots in a stage. Items range from laser swords from Star Wars, Bob-ombs that will blast anybody away, and hammers that break the competition. There are also items that aid users to be granted invincibility and percentage reduction. Items are balanced and anybody can use them, and it may appear near or away from you. Items have its chances, adding more fun to the game.

Super Smash Bros also introduces single-player modes like a 1P Mode with infinite continues, and adjustable lives and difficulty level. You go through 12 stages, fighting players while sometimes, in different formats. You’ll be fighting 15 weak fighters, 2-on-2 matches, 1-on-2 matches, playing minigames, and racing to the finish line. At the very end, you face off Master Hand, a glove that comes alive. Unlike other fighters, Master Hand has HP instead of a percentage gauge and knocking his HP to 0 will win you the game. It’s really epic and worth it to try out :)

There are also mini games that are similar to each other, involving you to hit the targets or land on platforms. Hitting all targets or landing on all platforms in the mini game will be won, while also earning a huge bonus in 1P Classic Mode. Fighters also have their own stages, with Mario in the construction stage from his first appearance since Donkey Kong arcade and Yoshi gets his own egg-throwing stage. Even the hidden fighters have their own stages :)

If the single-player mode bores you, the VS Mode will let you invite up to three of your friends for a match. You can set the items used, the gravity from being blasted away, and even have team matches, consisting of 1-on-3 or 2-on-2 or even 2-on-1-on-1. Pick whatever you want and start fighting away! Because Smash 64 doesn’t offer as much stuff as Melee and Brawl had, there’s pretty much nothing else to talk about :(

Except I have enough room to mention one last thing before I close down this review: Stages. Stages are obviously different in layouts and suit the theme of those stages very well, but it seems the best stages are in Smash 64 in the series, with creative layouts and such. Sadly, there’s only 1 hidden stage in the game, gotten for beating 1P Mode with...wait! What am I doing!? I don’t want to spoil it for people! Besides, I want to close down this review now!

FINAL WORDS
Super Smash Bros may not have as much as Melee and Brawl, but nonetheless it’s still a classic. Get it on Wii’s Virtual Console, have some money, and download! Seriously, this is a classic...