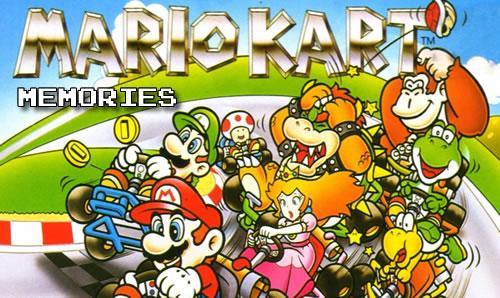 Mario Kart Memories: The Best Of. During the build-up to the launch of Mario Kart 8 for Wii U a promotion was run by GameStop encouraging fans of the series to post and share their best memories of the Mario Kart series to date using the hashtag #MarioKartMemories.

The campaign was most active on Twitter (because thats the platform you could win prizes on) but other sites making use of hastags such as Facebook, Google+ also had it going on. GameStop also registered a site for the event at MarioKartMemories.com

Everyone who participated in the event on Twitter was automatically entered into GameStop's prize draw to win a multitude of Mario Kart 8 Wii U Deluxe sets or a 100 USD gift card to spend at their stores or website. I was pretty sad I didn't win, I obviously didn't read the smallprint - you had to be in the U.S or district of Columbia to win.

A selection of some of our favourites from the Mario Kart Memories event.

My first time dodging a blue shell with a mushroom. I nearly DIED. #MarioKartMemories #promo

In Double Dash? I used Mario+ Bowser. Their Special Items together made my friends' lives a living hell. C8 #MarioKartMemories

I Think just getting your friends together and just having fun was A big part of it. #MarioKartMemories

I remember hanging out every day after school to play Mario Kart on the DS with a group of friends. I miss the #MarioKartMemories.

Wanting to destroy the TV when playing MKWii on 150cc. #MarioKartMemories #MarioKart8

I remember my lil bro and I played the Rainbow Road track in Super Mario Kart for hours, sometimes all day #MarioKartMemories #promo

My easy way to remember that red shells are better than green shells in 1993. #mk8 #MarioKartMemories pic.twitter.com/Q8sNDB1tOb

Some of the people who tweeted about their glorious victories. Were you a winner? Hurl us a tweet @the_mario_bros with your pic and we'll get you up here so you can rub it in (to people like me) further.

Okay so I didn't win the Mario Kart 8 Wii U bundle but I did win a $100 Gamestop Gift Card! Now what to use it for... #MarioKartMemories

All my years of #gaming paid off thank you @GameStop @NintendoAmerica #MarioKart8 #mariokartmemories pic.twitter.com/Y44MRZyHdY

Big thanks to @GameStop for the @NintendoAmerica #WiiU you have just made my night #epic #mariokartmemories #WINNER pic.twitter.com/18ptma222k