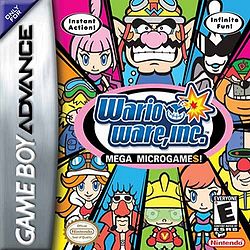 I was rather surprised when I saw this game, even more surprised when I actually played it, it's not just another Wario game after all... Made In Wario is a rather unusual game for Nintendo, in fact it's probably the first game the company has ever made like this.

Gameplay
It's essentially a game full of quick minigames, which you play for a couple of seconds each, trying to score points by finishing them. The game is split into stages with four lives per stage, so if you mess up a minigame, you still can finish the stage if you're careful. At the end of the stage, after around 20 mingames, (which get faster and faster as you go on) there's a boss level, which isn't timed but is usually a lot harder and longer lasting than the previous minigames.

Story
Although this game is in Japanese, it's easy to enjoy the story because a lot of it is told through very funny wordless cutscenes and the game has very little Japanese text, so you can enjoy the story, which is very, very funny in places.

Essentially Wario is bored and watching TV, he sees how successful a certain GBA game is doing on television and decides to go out and make his own software company, so he can make the big bucks too, which leads him and others to end up playing all these minigames.
Each stage has it's own character, with their own fun story and usually their own set of minigames which means that Wario himself isn't actually in the game very much, but appears in some of the minigames as you play.

Control
Easy. Most games only require tapping on the A button, or moving the d-pad so it's very easy to control. The menu's are in Japanese, but it's not hard to know what to do because the menu only really requires clicking on the characters picture, then you go right into the minigames.
Although, for some minigames, it's hard to know what to press, or maybe it's a question in Japanese, but it's easy to just lose a life and skip that game, because it doesn't happen often.

Graphics
Excellent. The graphics really are fantastic. In the cut scenes, the cartoony graphics work really well and are very well drawn and are very funny. The graphics for some of the minigames range from real life pictures to tiny old graphics in the older types of minigames, but these 'bad' graphics are deliberate and emulate the old game they are based on very well.

Replay
Admittedly, as good as this game is, it will only last you a weekend if you play it solidly, or a week or so if you're playing it on and off. Although after you've finished each stage, you can replay the minigames and get high scores on them, and there's also unlockable full versions of some of the games as you play, and also 2 player games too, which usually feature better graphics and one of the game's characters.

Overall, this is a great and original game, which although it's short, is very well done and is very enjoyable and very funny to play.