Why Retro Games Stand the Test of Time
Login

Why Retro Games Stand the Test of Time

It might sound a little biased coming from us, but even for the larger market, there’s no denying that some of the best titles are those which came out early in gaming’s lifespan. From the first Nintendo games to dead systems, and even the mobile phone market, something about the initial few generations makes them special. They might not hold up today in terms of graphical prowess, but regardless, we want to look at what makes retro games still worth a look today.

A Joy of Simplicity

When you first pass a modern gamer an old-school joypad you’ll often get the same confusion when they see how few buttons they have to work with. This might and does act as a limit on complexity, but this simplicity, at its core, is an enormous part of what makes retro games good.

With such limited button and hardware space to work with, these early games were forced to connect to the player through the strength of a primary hook. Run and shoot. Dodge and move. Go right until the next level. Bigger isn’t always better, and this simple idea has proven key. As Forbes explains, this is why it took Sonic so long to return to form with 2007’s Sonic Mania. Mario games, on the other hand, had no such issues.

The same concept also applies to the far more modern mobile market. Detailed in this research by Betway, some of the most popular mobile games today are those which appeared in the smartphone early life cycle. Games like Angry Birds, Candy Crush Saga, and Plants vs. Zombies continue to act as an enormous part of the mobile landscape, despite being technologically outmatched by their contemporaries. Some modern games intentionally try to simulate the retro experience too. 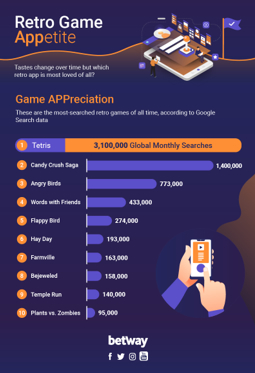 The next stage of retro fun comes from the appeal of friendly play. The unfortunate fact of modern gaming is that couch co-op and competitive experiences are now going the way of the Virtual Boy. Sure, we have online, but that can never match up to being there in person, to share in your friend’s victories, or to revel in their defeats.

Games like Contra or Wrecking Crew stand out for being hardcore games where you rely on your buddy to keep you alive. Others, like Super Mario World, take a more casual life-based approach, which was still amazing in letting you both conquer increasingly challenging worlds.

Heck, some retro games which tacked on multiplayer last minute were hits because of it. Goldeneye on the Nintendo 64, as Vice reveals, was a last-minute addition, yet became one of the biggest multiplayer breakouts of all time. In fact, in terms of bringing console shooters to the mainstream, only Halo holds the same position of influence.

The Story of Nostalgia

Nostalgia, while only applicable to those of us who grew up in or before the '90s, also plays an undeniable part of the retro gaming experience. An established psychological phenomenon, nostalgia gives greater colour to even the limited palettes of retro gaming. It’s what lets us stay involved in the retro games that didn’t age well, and love those that did even more. Who cares if it can sometimes damage our objectivity? Besides, regardless of your age, the fact that Super Mario 64 still holds up is a simple fact