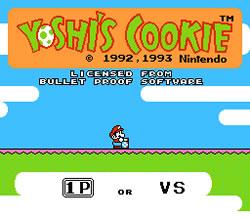 Nintendo released their very own puzzle collection game in Japan a month ago, and hopefully that means a US release will come soon.

Dr Mario will be instantly recognized among Nintendo fans, being the most famous Tetris Clone since, well, Tetris. Panel de Pon may confuse some, but perhaps you might know of its US releases as the Yoshi-themed Tetris Attack on the SNES or Pokemon Puzzle League/Challenge on N64 and GBC, respectively. Those who haven't heard of it can ask around and learn of its cult-like following and awe-inspired voices declaring it the best puzzle game ever. But Yoshi's Cookie? You'll likely draw a blank for that one. And so, as a public service announcement, I will give advice to those of you wanting to learn more: it's not that great.

To see why, you need to know how to play. The playing field is much like any Tetris clone, except wider than usual. You start with a rectangle of different cookies. The object is to make an entire row or column the same type of cookie, making it disappear. You do this by ''scrolling'' a row or column. Use the D-pad to make your way to the desired square, and press A and a direction, say, up. Thus, all the cookies in that row will move up a space, except for the top one, which will move to the bottom. It's kind of like a 2-D Rubick's Cube in a way. However, extra rows and columns gradually fall/move in from the right, so you need to move quickly.

But if you do think the game's moving too slow, you can press the B button to speed things up. Also, if you destroy enough rows/columns of one type of cookie, a Yoshi (which acts as a ''wild card'') will also fall in the next row/column, giving you a potentially helpful gift. Anyways, your goal is to continually line up your rows and columns until you destroy all the cookies. And then you move onto the next stage, of which there are 100 overall (separated into 10 rounds).

You get your standard options, but nothing more. You can choose your starting round, so you aren't stuck playing training levels forever. You can also set your speed to low, medium, or high. Add in your choice of music (or, thankfully, the choice to turn it off) and that's it. Nope, no other options for you. Likewise, graphics are bare-boned, or even downright ugly. The cookies are a rather disgusting shade of yellowish-something, although their shapes fortunately distinguish them. Mario looks like the old style Donkey Kong Mario rather than the familiar visage we're all too familiar with. On the other hand, the developers found it worthwhile to provide a mini-cartoon in between each round, a nice little light hearted diversion. Music, like all puzzle game music on the NES, should just be muted, making life much more bearable. It's a cheap puzzle game, please don't expect much more. 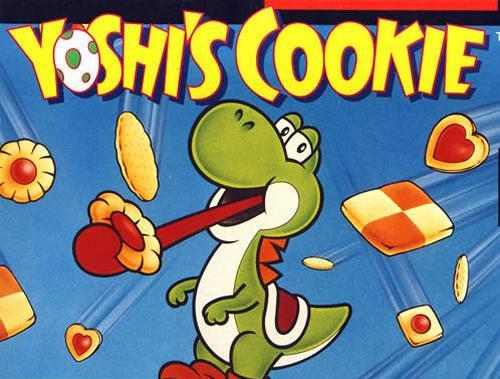 But far more damaging to the game than simply options or graphics is the annoying scrolling system. It's not that it's a bad idea; it's pretty much the only option given the premise of the game. But it was implemented so poorly. First of all, it's a bit on the slow side. I want immediate and quick response, not wasting my time getting the cursor to the correct position. True, it's a minor issue, but also an aggravating one. But it's the way you scroll that really bugs me. When you press A and scroll, your cursor stays still. I would much prefer the cursor stay on the particular cookie and ''drag'' the rows around, rather than letting the rows move around under the cursor. I would think such a design would make it easier to move certain cookies into the correct place, as you can move one horizontally and vertically without letting up on the A button. The method used here seems less efficient and less intuitive than it could be, which is simply unforgivable. At least provide the option to change the scrolling style!

It's also missing a critical element of the puzzle genre: a steady frantic challenge. Most of the time, the game will move along at a slow, laid-back pace. You can move pieces around at your leisure, and think ahead for later moves. However, once things start to get hectic, it becomes too hectic. As more and more columns and rows get added to your screen, you have to get more and more pieces of one type into a row. Thus, the game becomes harder as the rows build up, even though you're closer to death. Once things actually become hectic you're already going to lose anyways, so why bother trying anymore? If I want to play a puzzle game, I want to be challenged while still having a chance of winning. But no such luck here.

And that's not all. Things get tough when you get too many rows, but they also do when you get too few. When you only have 2 or so cookies left, you have to hope the next row or column will line up perfectly with them. If not, you just have to keep on going until you do get perfect matches. And you better hope you can get rid of these rows or columns before the next batch comes along and screws it all up. Thus, winning relies on luck alone. Fortunately, the Yoshi cookies help out here, but even still the endgame seems to drag on forever at times. And if it drags on long enough, you may find yourself with too many rows, and thus in the situation described above. I've played a level before where I was down to two cookies, yet still lost after nothing good fell for five minutes. Yet when I replayed it, I cleared the level before a single row or column fell. That's just too much variability in a puzzle game. Too much that it hurts the game overall.

Multiplayer does offer some respite to this travesty. You play on a 5x5 block, and you get a point for every row you knock out. A new row immediately fills in the gap, but this time with a Yoshi's head. Line up 5 Yoshi's head and receive a special bonus or punishment. These range from gaining or losing massive points, scrambling one player's cookies, losing control of one player's board, or placing a giant blind spot in one player's board. You play to a certain number of points, or until one player takes too long to clear a row (in which case he loses). On the one hand, this takes away the annoying luck based element of the single player game. But then again, it adds a whole new level of luck. Chances are, the game will move along slowly until one player gets five Yoshis. And then the bonus will massively change the course of the game. If you get lucky, you win! If not, you lose! How fun is that? Not very. It's different enough from the single player game to make it interesting to play, but it's simply not good enough to be fun on its own.

Sad to say, the game just fails when it comes to the addiction test. You don't find yourself mindlessly playing the game over and over; instead you're wondering why you should bother. You just can't get into a game like this, as the flaws prohibit total 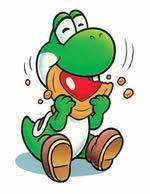 immersion. How can you get into the game when the scrolling bothers you every time you use it? There's no need to develop any sort of strategy, as you either have too much or too little time to think about things. And the fact that winning relies more on luck then skill will turn you off as well. There's no feeling like you're going to improve, and no sense of accomplishment when you win a round. There's just no satisfaction involved. Not even an entirely different multiplayer cannot bring a spark into this game. And with better games like Dr Mario and Panel de Pon out there, Yoshi's Cookie offers nothing for fans. It's the weak point in Nintendo's Puzzle Collection, and not worth playing more than once.