Captain Toad & Toadette are ready for adventure? Are you?
Login

Captain Toad & Toadette are ready for adventure? Are you?

The latest release from Nintendo gives Captain Toad and his Pigtailed counterpart their share of the limelight following the long awaited arrival of Super Smash Bros.

Captain Toad: Treasure Tracker is now upon us as the Wii U continues in its stride releasing more and more popular first party titles; it's game library now considerably better than it was a year or two ago.

Anyway check out the official release from Nintendo below:- 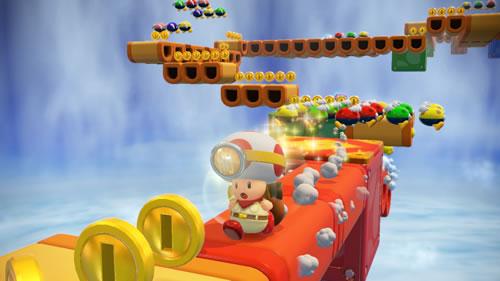 In the Captain Toad: Treasure Tracker game, launching exclusively for the Wii U console on Dec. 5, players must muster their own courage to help Captain Toad and Toadette tackle maze-like levels full of tricks, traps and enemies

The underdog hero Captain Toad needs help! He and Toadette will do anything for treasure. How else to explain the two intrepid explorers tackling near-insurmountable obstacles like smoldering volcanoes, rickety mine carts, haunted houses and even fire-breathing dragons? Talk about perseverance! In the Captain Toad: Treasure Tracker game, launching exclusively for the Wii U console on Dec. 5, players must muster their own courage to help Captain Toad and Toadette tackle maze-like levels full of tricks, traps and enemies.

Captain Toad: Treasure Tracker finds players donning their own trusty head lamps to journey through more than 70 colorful and imaginative levels. Each level is a self-contained puzzle full of surprising obstacles and creative challenges that can only be solved by viewing the world from different angles using the Wii U GamePad controller. With Super Gems and Power Stars hiding in every nook and cranny, power-ups ready to be grabbed and many unlockable secrets, Captain Toad: Treasure Tracker is overflowing with treasures of all types to track. And tracking treasure is what Captain Toad and Toadette do best.

“The already strong lineup of exclusive Wii U games available this holiday season grows even more with Captain Toad: Treasure Tracker,” said Scott Moffitt, Nintendo of America’s executive vice president of Sales & Marketing. “This charming new IP joins the ranks of fun family franchises that can only be experienced on Nintendo systems.”

When the giant bird Wingo accidentally whisks Toadette away at the start of Captain Toad: Treasure Tracker, it’s up to Captain Toad to rescue her. But Captain Toad isn’t the only one doing the rescuing. When the roles are reversed and Captain Toad is later taken by Wingo, Toadette has to risk life and pigtails to save the captain. The goal of every stage is to find the coveted Power Star, but Captain Toad and Toadette can also gather hidden Super Gems, 1-Up Mushrooms and shiny gold coins. Players can also complete a specific challenge on each stage like “Slipped Past All the Shy Guys!” that will unlock additional levels in the game. 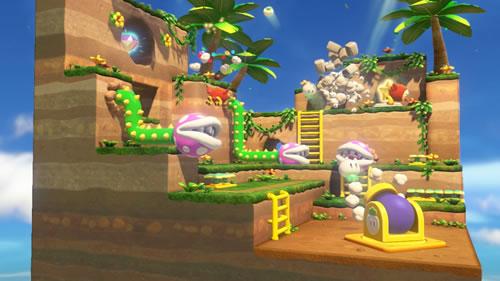 Equipped with a head lamp, backpack and fashion-forward kerchief, Captain Toad and Toadette look ready for adventure, but there’s that pesky problem of not being able to jump. But not to worry: Using creative thinking instead of fancy footwork, players have numerous ways to reach the Power Stars. They might need to pluck turnips to throw at enemies, ride in mine carts to reach the goal, grab helpful power-ups like the brick-breaking Super Pickax or multiplying Double Cherry, or spin the camera around to discover hidden passageways. Players can even tap the touch screen on the Wii U GamePad to deal with troublesome enemies. The amount of variety and creativity in the game is staggering and keeps getting better and better as the game progresses.

Personally I won't be embarking on Captain Toad's adventure this time; my destiny lies along another path. How about you guys? Are you intrepid enough to assist the good captain?