Donkey Kong Jr Math for the Nintendo Entertainment System brings numbers to life (attempts to) - help Donkey Kong Jr learn to add, subtract, divide and multiply. But its not as easy as it sounds, to select answers you've got to climb to them, jump on them etc before time runs out. Two player mode even means you can bring a friend to the fun, the game features various cameo appearances of Donkey Kong 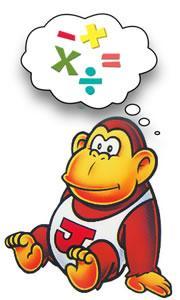 Donkey Kong Jr, Math, and videogames: what could go wrong? That was the thought that went through the heads of the marketing department at Nintendo as they developed and released this game. Donkey Kong Jr. Maths was the only educational NES game to make the leap from the Japanese markets to the United States and European markets. With a complicated concept and very little in the way of entertainment value, the game was received rather poorly.

Donkey Kong Jr. Maths had some of the most complicated gameplay of its time. There are two modes that you can choose from in order to get started. The first mode of the game is called the Objective Mode. The basis of the objective mode is to enter the answers to math questions that are posed at the top of the screen by none other than Donkey Kong. The questions involve addition, subtraction, division, and multiplication. You answer several levels of these questions until you reach the end of the mode.


The other mode of this game is a multiplayer mode where two players can face one another. A number is shown at the top of the screen by Donkey Kong, and the two players have to run around to make a math problem that will equal the number. If the number was two, then the players would have to find a 1, then an addition symbol, and then another 1. This takes place in a platform style game, much like Donkey Kong Jr. The two players have to leap around and climb vines in order to get the numbers that they need. For some of the higher level problems, you have to get multiple numbers and symbols in order to be successful. The problem with this became the order of operations, which would not always let the person get to the number that they needed. 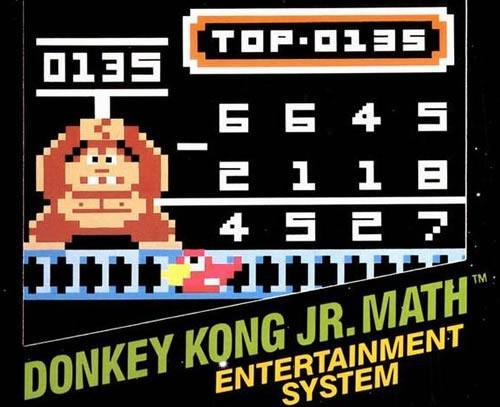 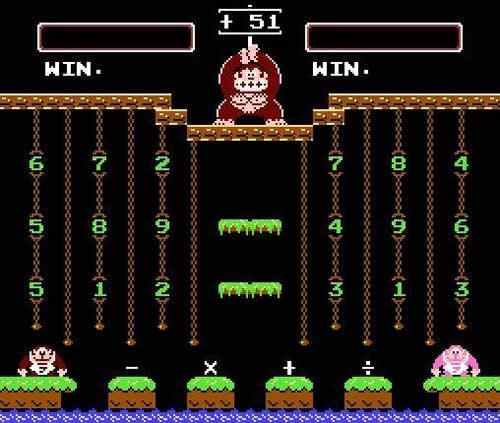 A screenshot from the NES version of DK JR Math showing standard DK JR on the left and Pink DK JR, right (player 2) 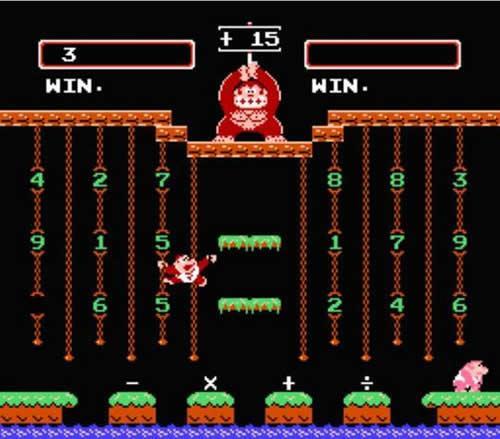 Player 1 swings into educational combat, whilst player 2 continues to come to terms with being landed with Pink Donkey Kong Jr. #ragequit

Donkey Kong Jr. Maths had abysmal sales and a reception with the general public to match. Some of the game rankings that were given out by GameRankings rate the game at 32%, saying that the game was made without enthusiasm, the movements in the game were poor, and there were few redeeming qualities about the game overall. Other game ratings gave the game a miserable 3 out of 10 and gave the game such harsh criticism that the game would be too expensive even if it were free.

In terms of sales, this game had the worst release of any NES game that was ported across the globe, and no particular sales numbers are available. 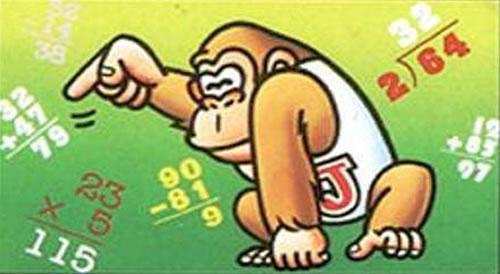 The reception might have been bad for his game but Donkey Kong Jr. looked to be in high spirits, as he partied on down to some rigorous division and multiplication.