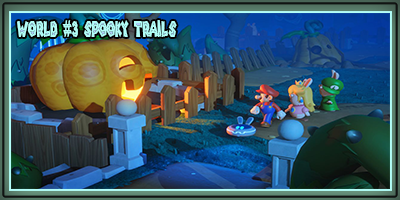 ♠ - Back to Home
This is a one level battle segment where the players will have 5/5 turns to take down 10 enemies. The enemies are basic shooting ziggies with a few extra perks. They have a hero sight ability, so be careful when running out of cover. In fact, always try and stay behind cover. Also try and notice which enemies have the hero sight on, from the animation they make when it is cast. Princess Peach is good here with her Grenaduck to take out the several enemies under cover areas. Rabbid Luigi is also good with his Bazooka, close range weapons aren't going to work well because these little guys stay away and are rather mobile. This level can be tough especially in segment #1. First, you will be introduced to the peek-a-boo enemy types. These enemies can draw you in close like Rabbid Mario's Magnet Skill. They can also Teleport and will be accompanied by Ink effect weaponry in the second segment. Once again for segment one, just be aggressive and you should nail a perfect, even if it takes a 2nd or 3rd attempt. The 2nd segment is rather tough so let's discuss it now.

Peek-A-Boo enemies will cover larger areas of the map than normal, due to their ability to teleport. What the player should do in this case is cover as much of the map as possible with each ally. Have Mario on one side, Princess Peach covering the top left area, and Rabbid Luigi on the bottom floor. Don't forget to always use your cover, and Super Barrier + Vampire moves are truly amazing here. Vampire can keep you alive, and this goes double if you have Rabbid Luigi's vampire Bworb.

Also, you want to use the white rabbid pipes as often as you can. Keeping ground on the Peek-a-boo enemies is crucial. Do this and combine slide/dash attacks into main attacks will ensure your victory. You must do this one in 4/4 turns and in my opinion, this one is the hardest segment yet, so get your game zone set!

For Segment #2 you will be dealing with actual Boo enemies from many Mario games before. These guys will chase you on the 2nd level of the arena. Be sure to have them not follow you, the player can do this by keeping their faces on the Boo's eyes. This is typical too many Mario games before and older players should understand well enough. Two Boo enemies will eventually spawn, so it's best to avoid the 2nd floor.

Supporters will be the main focus here and you will have 5/5 turns to clear out five enemies. If you can avoid the boo's this isn't too tough at all. It is actually far easier than the Peek-A-Boo enemies in the first segment. Just avoid that second floor or at least don't get caught by the Boo's. You should be fine in this one with a good party, consisting of Luigi, Mario, and Princess Peach.

You may get stuck in the puzzle segment at the end of the level. The best way I can show you the solution is by video. Please check it out below.

Players will have 8/8 Turns to successfully escort Toadette to the yellow marker point. This isn't too difficult, but hitting the turns in 8/8 may be a little tough. The trick is that you should know it is ok for Toadette and your team to lose a little bit of health. Use Rabbid Peach and Princess Peach along with Mario. You want to have Princess Peach use her shields at the start of the battle, then you can make Rabbid Peach escort Toadette.

Place Mario and Princess Peach near the battle starting point. This is because most enemies will spawn at this point. Use Hero's Sight and Royal Gaze as much as you can. Follow up with attacks from Princess Peach and Mario. Use the white rabbid pipe and plan out your way to the yellow marker. If you progress aggressively enough, the player should be able to have Toadette reach the goal within 8 turns or less, without losing any teammates. Use Rabbid Peach's heal ability if you take too much damage.

This is a very easy level if you do one little tactic. At the start of the level pick Luigi, Mario, and Rabbid Peach. Position one player towards the left and use the team jump ability, along with Luigi's Itchy feet skill to gain extra ground. You can jump to the other side of the map and save tons of turn time. Make sure to have at least two players on the way to the goal, to speed things up even further. Do not drop down to the right bottom side of the map with the smashers. They are too tough, and there is virtually no reason to go down there at all.

If you do this and bring along some sentries you should be fine. Remember to cast the sentry first, to "scout" the area. This will make the sentry take "hero" type attacks while you are on the move. They can also do damage and serve as shields in some cases. Once you reach the goal within 10/10 huge amount of turns you will complete the segment.

In the second segment, you will have 8/8 Turns to beat eight enemies. Most of these are smashers and then a few Peek a Boo enemy types. The peek a boos are honestly the most dangerous as they have the vampire ability and a nice blaster shot that deals around 100 damage + the vampiric ability. Try and have Luigi sniping the Peek a Boo's and Rabbid Mario's magnetic ability to draw them into a boom shot.

The boss is really tough and is currently the toughest level/Mid-Boss I encountered thus far. If it is too annoying to get a perfect on this one or even complete the level, go to easy mode! 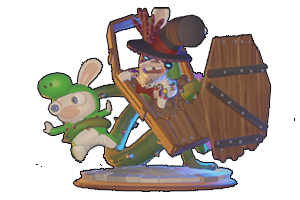 A large amount of the battle and even the game comes down to luck, based upon the Special Effect of weapons and enemies. This can be a good or a bad thing for the obvious reasons.

If you do happen to get lucky, with criticals and special effect status attacks, be sure to plan out strategically your next move. Do not rush in or you will probably end up dying and wasting your turn. Don't be afraid to restart the battle if you get off to a "bad start" and lose an ally early or take more damage than you would have liked.

You want to focus on the Mid-Boss, but sometimes it closes its "mouth" which is the coffin and you can't get any attacks in. This means we must hit it while its coffin/mouth is open. When it is you should attempt to focus all attacks on the Mid-Boss. Sentries work great as they are powerful.

I also like a party of Rabid Peach, Mario, and Princess Peach, This is because they have the most amount of Hit Points. The boss also has a huge Hit Point pool at 1100 HP. It can pack out a punch, especially if you haven't been killing the minions that spawn along the way. Like I said it is the toughest fight yet, but practice makes perfect.

In this level, there will be two battle segments. First, you will have to clear out 5 Valkyrie Rabbid Enemies. These are a new type of enemy that looks pretty cool. They can cast a protective linking shield that increases defense but splits damage between all those with the shield conjured around them. They fire Gatling guns that pack a little bit of power. Finally, the worst move is the crash landing move. These Valkyries can smash into cover zones and the result will damage allies as the debris hits your teammates.

Be cautious in the first segment and plan out your attacks wisely. Sentries are always your friend. You may want to use Rabbid Luigi here using his Rocket/Bazooka. Destroying more cover blocks mean less damage to your allies. Finally, the second segment is another defeat all, with no Valkyries. You shouldn't have trouble with segment two as long as you heal up fully before hand, by restarting the battle.

The first battle segment is tougher than the 2nd. For the first segment, I suggest having high powered attackers, such as Rabbid Mario and Princess Peach for their boom shot attacks. Mario is unchangeable so make sure to use his M-Power to boost attacks damage.

At the start of the battle, head left and fight the smaller guys. These include some Valkyries as well as a Spooky Ziggy or two. Once the smaller guys are defeated you can then focus on the larger buckler enemies that usually need to be flanked for the team to deal damage. You could get unlucky here and be bounced off the map like crazy. In this case it may still require a few attempts for a Perfect. Remember if you choose the easy mode, it has no effect on whether you can still 100% perfect every level. It's just a bragging rights thing at best, so don't be afraid to use easy mode.

For the second segment heal up and defeat seven of the spawning enemies. These include smashers and bucklers mainly. Try taking out the bucklers first and remember that even if you have a 0% chance to hit, your special effects can still work. Don't be afraid to shoot in this case instead of passing the turn over to the enemies. When you defeat seven enemies you will have completed the level

This level isn't so bad. You can get unlucky if the boo's move you around the map too much. This may cause a retry or more. Luigi'sitchy feet move is ideal due to gaining more ground in the field. Use Luigi, Mario and another party member of your choice. Have two party members go down the pipe on the left. Have another party member go down the right pipes. Each will lead back to the center starting boo area. However, you will probably get caught once or twice by the boo's on your first try. Attempt to push with all characters until you reach the goal. In this final stage of World #3 Spooky Trails, you will fight the Phantom. This guy is dramatic, to say the least and the battle is long and pretty tough. The biggest problem for me was knowing that you have to dash into the Light bulb generators to break them. You can't shoot them. Defeat each wave of enemies and I mean all of them each time or they will probably end up killing the entire party. Do this three times, however, each time an extra spot light generator appears. Once you get the hang out the battle you should be able to beat it. It is tough though and you only have 9/9 Turns for the Perfect.