Pinball is, as the name suggests, a pinball video game (or a simulation of a pinball machine, if you prefer), developed by Nintendo for the NES. It was released in 1984 (in Japan), just before the actual console made its rushing breakthrough on the market. After the original release, the game reached North America in 1985, as well as Europe in 1986.

The game is based on a 1983 Game & Watch unit of the same name. Its original version was made exclusively for the arcade machines (and it became one of the biggest arcade classics, along with the original Donkey Kong), but as soon as Nintendo launched their new console, it was just a logical move that this arcade gem will also be one of those games that will be ported to the new system. The NES version of the game added an alternating two-player mode, and this version was also later re-released as an e-Reader card game. It is also an unlockable mini-game in Animal Crossing (a title developed exclusively for the Nintendo GameCube). 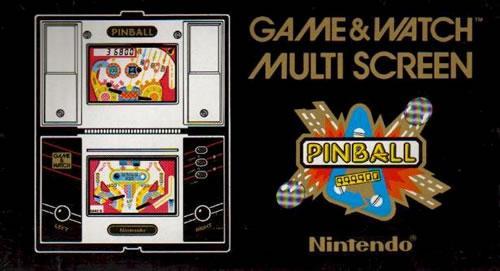 You may be asking yourself – “What the hell does Mario have to do with this?” And if we tell you that he has a cameo appearance in this game as well (though, in a different image then the one we got used to….but hey, this was the period before he actually “became” Mario), along with the damsel-in-distress from Donkey Kong – Pauline…would you continue reading this article and would you play the game as well? You would, admit it……….we know you would.

We believe that a vast majority of you already know what pinball is, and how the pinball machine functions, but we are going to make a short recap in this section anyway, and describe what is different in this exact version of Pinball.

This game is, basically, a simulation of the pinball board. The objective is to score as many points as possible, by not letting the pinball to fall under the paddles and by hitting various spots on the board. All that brings extra points to you. You control those two paddles, and they are placed at the bottom of the pinball machine. There are 2 sections of the board, in total, so above the mentioned pair of the paddles, there is another pair that functions the same way. Above the paddles on the first screen, there are 2 bumpers and 3 circles that, when hit, give 100 points each time when this happens. Just beneath the orange circle there are 3 eggs. When one of them is hit, a baby chick will pop-out, and as soon as it is hit again, it will disappear. In case all 3 eggs are hit at once, the 2 stoppers will show up at the sides of the board. To the left of the mentioned 3 circles, there are 7 numbered targets. If all of them are hit, the 6 pink lines to the right will disappear, and it will allow the pinball to go back to the top. Above the 3 circles, there are 5 cards with the letter “N” on them, and in case that all of them are turned over, you will get a stopper, and the color of the board will be turned to yellow. To the right side of the cards, there is a brown hole that leads to the bonus area. 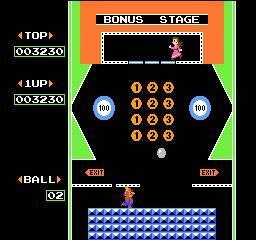 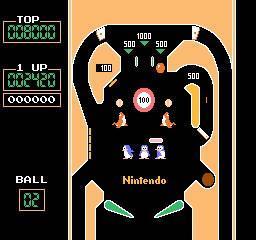 The bonus mini-game is a secondary Breakout-like mode game of the game. Over here you control Mario who is holding a platform that looks like a grid, and your objective is to rescue Pauline (a girl that was previously seen in the legendary Donkey Kong game) by bouncing the ball off the platform, hitting various targets on this part of the course. The destruction of those targets brings extra points. When the blocks on which Pauline is standing are removed, she will drop down, and you must carry her safely to one of the either exits, to get extra points. By not managing to achieve this, you automatically lose this mini-game.

The controls in the game are very basic. You can see them right here:

A total of four different versions of this game have been released since the NES version spotted the light of the day. A complete, playable version of “Pinball” was a part of the Nintendo 64 title called “Doubutsu no Mori” , as well as the remake of the game on the Nintendo GameCube “Animal Crossing”. In 2002, the game was re-released as one of the several e-Reader games under the name Pinball-e. Just before the official release of the Nintendo Wii console (in 2006) it became available as a part of the Virtual Console for that system.

">Family BASIC (a software made for the Japanese Famicom), the penguin that appears in this game makes a short appearance in Game 1, as well as the sidesteppers from the well-known arcade classic Mario Bros.

In the Game Boy Advance release WarioWare Twisted!, this game appears as a microgame. It is very similar to the Breakout-styled mini-game that is present in the NES version of the game. There is a change in the surface, though, as it is circular and not flat like in the NES release. Also, in order to control Mario, you must twist your Game Boy Advance or the Nintendo DS. There are 3 stages in total, and each of them lasts a couple of seconds only. Also, they become progressively harder, as the speed is increasing and, on the other hand, the size of the paddles becomes smaller in size.

The game was also included in the NES Remix compilation. 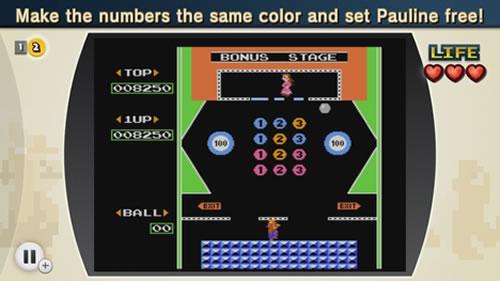 Like we said already, this isn’t just an ordinary pinball game, it is a pinball game that has Mario in it! Before his well-known cameo appearance in the cult title “Punch Out!!” and even before he actually got recognized as Mario that we know today, he made his first cameo appearance in this game. Pauline, the girl you were saving from Donkey Kong in the arcade classic that carries the same name, returned in this game as well.

So, just like in Donkey Kong, in this mini-game Mario has to save Pauline as well. But things are slightly different this time around. In order for you to actually get the chance to play as Mario, you need to make the ball enter the hole on the right side of the table, on the bottom screen. As soon as you manage to do this, you will take control of Mario who is holding a grid above his head. You can see Pauline above, as she is trapped in a cage by 3 blue barriers. Your goal is to release her by bouncing the ball to remove those barriers. You must catch her after that, as she falls, and move her towards either of the two exists for bonus points (this is only a bonus game).

We must add that Mario also appears on the official cover-art of the game. He is also carrying the grid above his head, just like in the bonus mini-game, but he has a different appearance here (he is wearing a combination of blue and orange, instead of the standard red-and-blue combination). 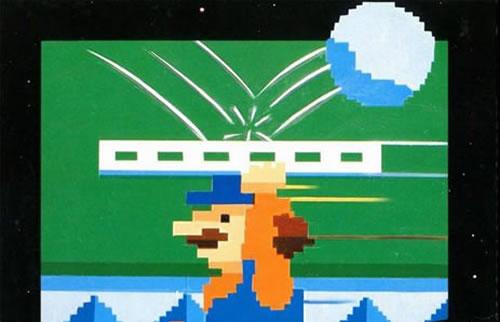 A video showing the gameplay in Pinball 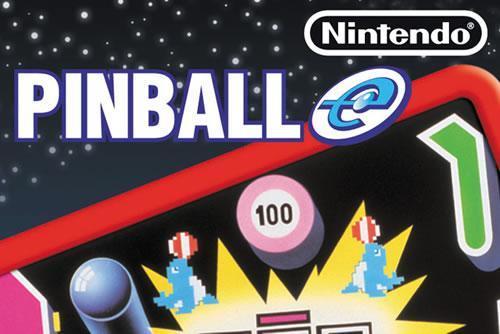 Since pinball was widely popular in the 80s, the game had a huge success when it was released and, being one of the first games of the genre, it is still dear to many NES players, as well as pinball-lovers and gamers, in general.

But, it must be noted that it didn’t manage to get a cult status like most of the other games where our favorite plumber appeared in, both as the lead character or as a cameo. Gaming critics also had different opinions about it. While some of them praised it for being a great simulation of pinball and for being a very fun experience, others criticized it because it was too basic and ordinary, stating that the game doesn’t have much to offer to the players.

Retro Nintendo Reviews rated the game with 3/10, concluding the following: “Feel free to pass this one up, unless you are a die hard trying every NES game. The gameplay is decent for what it is, but very little variety means boredom sets in quickly. I’ve heard there are better Pinball games out there (Pin*Bot, Pinball Quest), so give something else a try if you are looking to satisfy your pinball itch”. IGN ranked the Virtual Console version of the game with 5/10, stating that “Pinball only has one table and one bonus stage, and that's not a lot of depth for your dollars. Fans of inclined tables may be better served putting their money toward more robust or unique pinball experiences, like the playable-on-the-Wii-through-backwards-compatibility GameCube title Odama.”. On the other hand, reviewers from Classic Game Room praised the game, nothing that it “plays extremely well for an old school, 8-bit pinball game and provides hours of good fun”.