Punch-Out! (Cameo) game information, videos, and the legendary appearance of Mario as referee

Punch-Out!! (also known as Mike Tyson’s Punch-Out!!) is a boxing sports fighting video game released on the NES in 1987. The game was a huge hit on the arcade machines, and when the NES was released, it was just obvious that a port of the game has to be released for this console as well.

As it is a sports game, basically, it doesn’t have much of a story. But anyway, since you came to this page to discover everything that is possible about this game, we are going to explain the whole plot, shortly. The main character of this game is a “new boxer in the city” called Little Mac. His ambitions are clear - he wants to become a new boxing champion. Together with his mentor (Doc Louis), he has to pass over various challenges and beat all kinds of tricky boxers……all the way to the “big daddy” himself – Mike Tyson (in the later version of the game, due to licence's expiration, he is replaced with a fictional boxer named “Mr. Dream”). His journey to the top will not be easy, but a real champion must come out to the field and prove himself when occasions are the hardest. And there is no doubt that Little Mac has everything he needs to be a champion, but he has to prove himself in the ring.

This is also the boss game in the Sports folder in WarioWare, Inc.: Mega Microgame 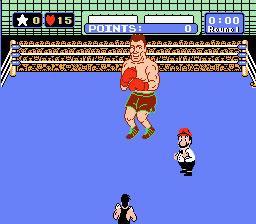 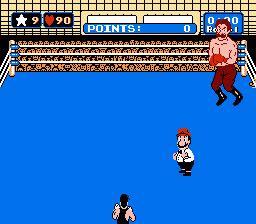 Even though it is often classified as a simulation of a boxing game, this title can hardly be given the attribute “simulation”. It is an arcade game. But a very fun one, that is!

As it is said before, the objective of the game is to become the world boxing champion. In order to do that, Little Mac has to fight a whole lot of different and tough fighters in order to reach the big Mike Tyson himself. So, the whole game is a series of “boss fights” between you and your rival in a boxing ring.

Even though it looks and sounds like a typical fighting game, trust us on this – it is not. In order to beat your rivals, you don’t have to act like a frustrated button masher, smashing your controller all the way through (though we cannot say that you will not get pissed off from time to time, but the accent is on something else, entirely). Instead, you have to carefully observe the way your rival moves and find his “weak spot”. Since Little Mac’s movements are very limited compared to the whole arsenal of different combat strikes of his rivals (he only has several attacks – left and right uppercuts, left and right jabs and a power-uppercut, that is available once you acquire the star), you need to use your brain as well in order to ultimately succeed in your mission. So this game has, sort of a, puzzle element in it as well. It is not so tough to beat the first couple of boxers, and it is rather easy to find their weak spots, as well as to dodge their attacks, but as the game progresses, fights will become much tougher, and the attack patterns of your rivals are much tougher to predict, plus they are much faster! This game will, undoubtedly, put your reflexes to the ultimate test. It is a very tough game, but it is never unfair, so even though you will be frustrated at times, you will still have the motivation to “try to beat this guy just one more time”. 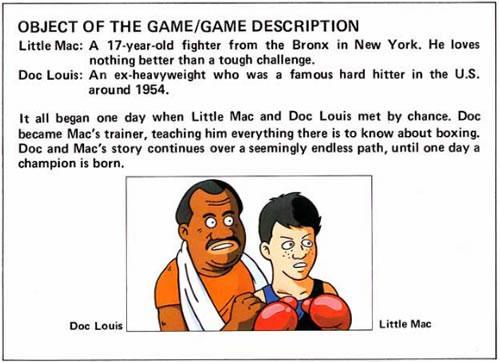 From the Punch Out manual


The match can end either by knockout (KO), in case the knocked-down boxer doesn’t stand up in 10 seconds, by technical knockout (TKO), if the boxer is knocked down 3 times in one round, or by decision (when there is no clear winner after 3 rounds, the winner is declared by decision). In order for you to be the one who wins the match “on the green table”, you must get a higher than usual number of points, by repeatedly punching your rival or by knocking him down, also more than usual. But this doesn’t work all the time. When the round ends, you will get to hear some advices from your mentor, as well as the comical “threats”, that you will be getting from your rivals.

Little Mac can be knocked down 3 times. But once he is knocked-down the 4th time, he automatically loses the match by knockdown. Once you lose the match, you have the right on a rematch, but if you lose a Title Bout, you will fall in the rankings (one place for the Minor and Major Circuits and two places for the World Circuit). Losing a rematch, thus, makes you lose one place, and the third loss results in the “Game Over” screen. A defeat in the final showdown with Mike Tyson/Mr. Dream automatically results in the “Game Over” screen. Little Mac is knocked down as soon as his health meter drops to zero. However, once he stands up after a knockdown, he regains some health, although everything remains the same, and the next dropping of the health meter to 0 will result in another knockout. After a certain number of points that you get by punching your rival, you will acquire a star, which enables you to use the power-uppercut.

Also, we must not forget to add that the cast of your rivals is really creative. All of them are fictional characters (except of Mike Tyson himself), but they are greatly designed. You will encounter various types of boxers from the typical “macho-men wannabes”, huge fat warriors who could try sumo wrestling as well, a huge Russian boxer whose biggest passion is, as you can guess, Vodka…all the way to the Indian boxer with a turban on his head, and with a bunch of magic tricks up his sleeve! Isn’t that awesome?

The Referee (It's Mario!)

It is very possible that you were asking yourself “What the hell does this boxing game have to do with Mario?” And well, it is not strange. But we will tell you – it has a lot to do with Mario, because he appears as the referee! Yeah! Isn’t that cool? He has a different appearance in this game though, but it is still that familiar Mario we all know and love. Instead of having his usual red and blue combination, Mario is wearing a white shirt and dark pants. He is not seen in the ring during the battle, but as soon as one of the boxers is knocked out, he pops in and starts counting for the knocked down fighter to stand up. He is also here to announce the winner, of course, and also to allow the match to start/resume.

Punch Out has been out a very long time; at the time of writing this 27 years and by now most people know who the referee is; the unmistakable plumber from our favourite platformer/adventure and racing games... but it wasn't always known that Mario would even take the role as referee, infact judging from an Iwata asks session about the NES version of Punch Out back in 2009 Shigeru Miyamoto himself didn't even know! Check out the dialogues below on the subject! 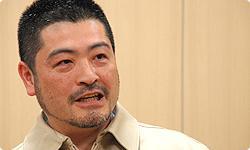 A designer by the name of Makoto Wada (pictured above) who had joined Nintendo in the late 1980's just in time to be involved in the Punch Out project. At this time Mario Mania was in full swing and Wada-San took it upon himself to make the games referee a little more interesting than the standard generic guy in black and white; noting that his companies mascot was at the height of popularity in the gaming world it seemed like a no brainer for Mario to step in, in the form of the referee. Here's some dialog on the subject:-

Satoru Iwata: You could get away with a lot then. (laughs)
Shigeru Miyamoto: We didn't have an approval system when using Mario images back then and it went right past my check. (laughs)
Wada: That's why it is a slightly strange looking Mario. 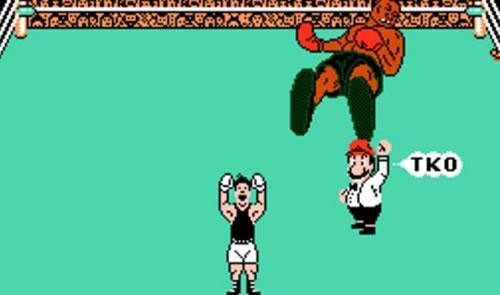 It might not have been an authorised appearance for Mario but is none the less another famed cameo. Here is another interesting extract from the same interview which includes a little inside tip which had been secret for more than two decades after the games release.

Wada: This is a great opportunity, so I have something I'd like to say. In Punch-Out!!, the game gives you a lot of hints about effective timing of punches. There is a big boxer called Bald Bull in the NES version as well and a light flashes to the right in the audience when he charges. If you punch when it flashes you will land a body blow.
Tanabe: What? Really?
Wada: No one has known about that for about 22 years…
Everyone: (laughter)
Wada: I was wondering when I would have a chance to tell people that.
Iwata: You've been holding that information for 22 years since the release. (laughs)
Wada: Now that I had the chance. (laughs) There are a lot of hidden elements in the NES version.

A North American TV commercial for Punch Out

A showcase of the gameplay in Punch Out! 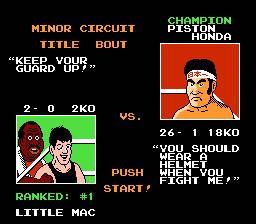 The game was greatly accepted from the entire gaming community. A reader poll on GameSpot ranked it as the 6th best NES game ever made, and it was ranked as 17th best game on a Nintendo System in Nintendo Power’s Top 200 Games List. In 2008, the same magazine listed it as the 6th best NES game ever, praising its arcade-style fun over realism. Author Steve L. Kent called this game – “the second major game of 1987”. Another author (Nathan Lockard) cited the controls, the graphics, the violence, as well as the variety for it being a “true classic” and one of the best NES games ever made. GamesRadar ranked it as the 11th best NES game of all times. They called it “a brilliant puzzle game disguised as a sports game”. GameInformer ranked the original version of the game (the one with Mike Tyson in it) as its 14th favorite game ever in 2001. And, it should be concluded that this game managed to sell 2 million copies, in excess. All this is more than enough for the game to earn the cult status, and it still holds it proudly today as well.