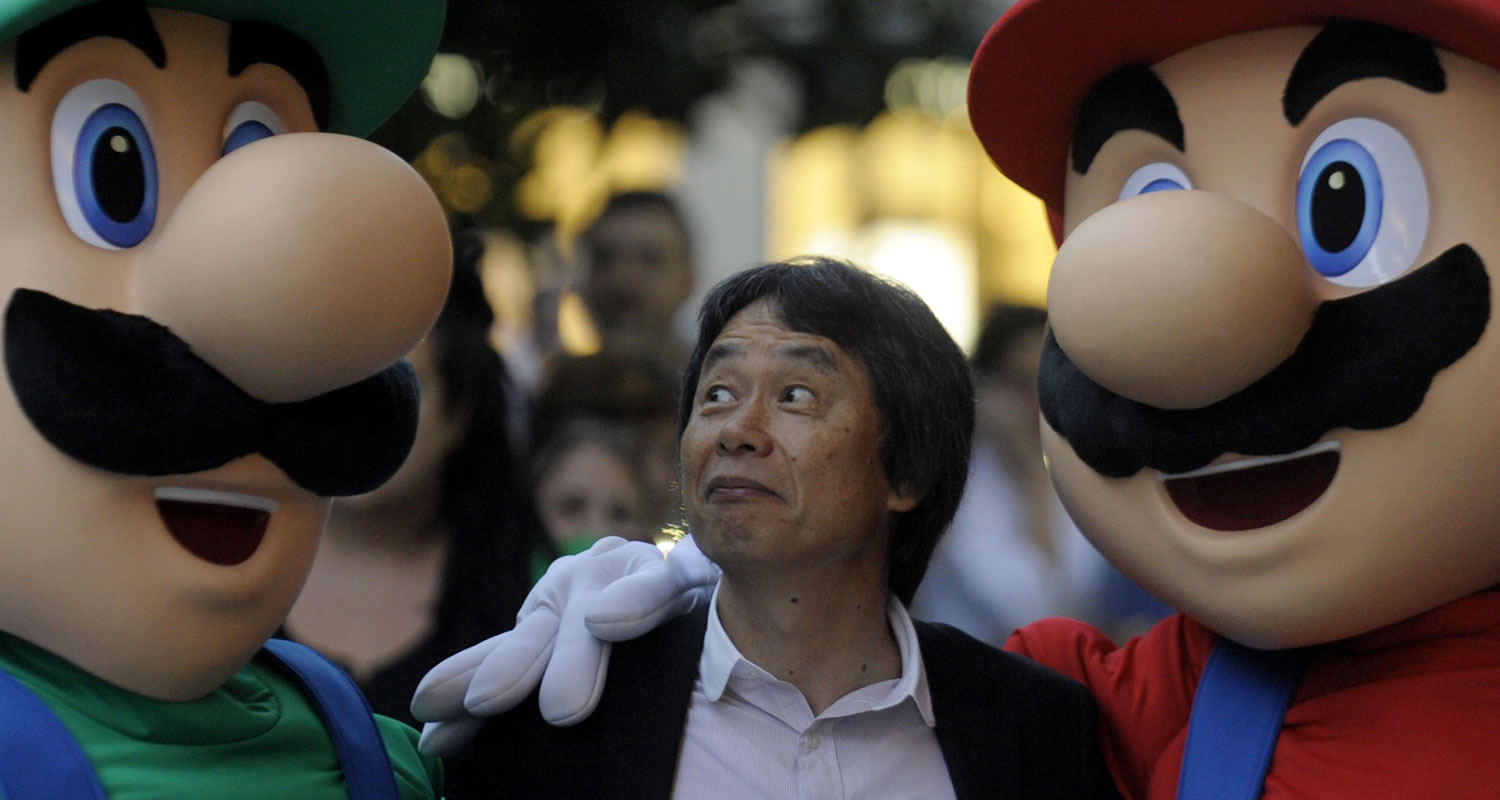 Name: Shigeru Miyamoto
Date of birth: November 16th, 1952
Place of birth: Sonobe Cho nr. Kyoto, Japan
Occupation: Game design and cartoonist
Marital status: Married
Spouse: Yasuko Miyamoto
Children: 2
Favourite videogame character: Pac-man
Favourite Mario game: Super Mario World, as revealed in an interview with USAToday
The man behind the Mario Franchise is none other than Shigeru Miyamoto! A Japanese videogame designer and producer who became famous mostly for his work with Nintendo, his Mario franchise is perhaps the most successful videogames franchise of all time.

Donkey Kong, The Legend of Zelda, Star Fox, Animal Crossing and F-Zero are the other popular Nintendo franchises Miyamoto is in some way responsible for. No doubt that on every Nintendo console you will see the work of Miyamoto, from the earliest arcade machines up to the modern day consoles like Wii U and 3DS. 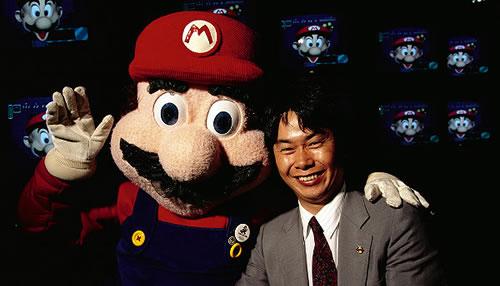 Born in the town of Sonobe, Kyoto, Japan on November 16th, 1952, Miyamoto's surroundings and upbringing influenced his work greatly. Sonobe was a rural town surrounded by forest. His sense of adventure and willingness to explore these surrounding forests and caves as a child was a key element to his success.

Other hobbies of the Miyamoto as a child included painting and reading. He also enjoyed softball and swimming as well as the guitar and piano. Miyamoto graduated from Kanazawa Municipal College of Industrial arts. He had no job waiting for him after graduation and was at first a freelancer.

As Nintendo tried its hands at various different projects, Miyamoto was part of the design team who worked on the first coin operated arcade game called Sheriff. At this same time, Nintendo was having good success in the Japanese market and was trying to break into the North American market for video games. Unfortunately Nintendo's initial attempt to break the North American market with their Radar Scope had flopped terribly. There were such high volumes of unsold units that the company was at risk of total financial collapse.

The president of Nintendo at that time, Mr. Hiroshi Yamauchi, entrusted Miyamoto under the supervision of Gunpei Yokoi (head engineer) with the task of converting these unsold Radar Scope units into an all new arcade game. Miyamoto trawled his rich imagination for a tapestry of ideas as to what the plot of this game could be about, coming up with a love triangle between an Ape, a carpenter and a girl. Had he worded it like this in the modern day, I'm sure he'd have been arrested.

After much going back and forth with the small team of design engineers he had to work with, they had finally come up with the idea of a game which was not too complex to program - a game featuring ladders and levels to move about on with barrels as obstacles. This game if you didn't guess already was the original Donkey Kong.

After the success of Donkey Kong, helping Nintendo break the North American market at last, Miyamoto soon set to work on sequels, Donkey Kong Jr. (The first game to feature "Mario" as opposed to Jump Man) and Donkey Kong 3. Nintendo recognised and rewarded Miyamoto's talent and allowed him to work on other titles such as Excitebike and Devil World.

Keen to return to the characters that gave Nintendo such great success in Donkey Kong, Miyamoto then looked back at Jumpman, who was now known as Mario. He gave Mario a brother, Luigi who would also get a starring role in his next game--Mario Bros. Due to the graphical restrictions of Donkey Kong, Jumpman was seen to have overalls and a cap, and looked more like a plumber than a carpenter. So that was it - Mario was from then on a plumber. To this date Miyamoto's "Mario Bros" has been seen on over a dozen consoles.

Still working alongside Gunpei Yokoi his friend and mentor, Miyamoto set out to work on several different projects including Ice Climber and Kid Icarus. There was to be another game based on his obvious favourite character too; Super Mario Bros would soon be released. Not only that but this was around the time the original Legend of Zelda began production. 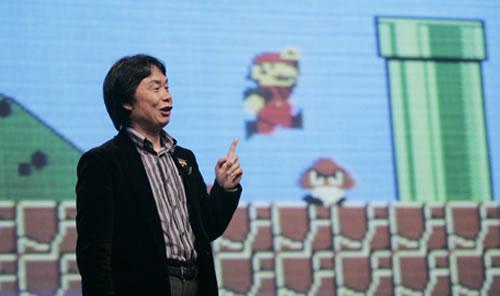 Miyamoto's continued focus on games which were played for the enjoyment and fun of playing them as opposed to being played in an attempt to gain high scores was what made his titles memorable and unique.

It is for this reason that a little known title called Doki Doki Panic would be revamped with Mario characters & released as Super Mario Bros. 2 in the rest of the world. The Zelda sequel the Adventure of Link featured more rpg elements such as magic spells and experience points as well as much more contact and communication with NPC's (non player characters) adding more of a story element to games. The sequel to Super Mario Bros. 2 (Or the Lost Levels as it was known in Japan) was developed by a core group of Nintendo R&D Team 4 and was two years+ in the making. The development team thrashed out various ideas during this time such as the idea of Mario becoming a centaur - this idea was dropped and replaced by a racoon tail and limited flying ability.

For Super Mario Bros. 3, Miyamoto's aim was to spice up the series with the addition of new enemies while holding onto the classic Mario enemies we'd come to know such as Goombas, Koopa Troopas, etc. This title also featured seven Koopa kids; Miyamoto based each Koopa Kid on a member of the programming team as tribute and acknowledgement to their work and efforts. In the English localization versions of the games, however, the Koopa kids names were changed to resemble names of Western Musicians. ie. Iggy Koopa as Iggy Pop etc..

The separate departments for research and development merged, creating the Nintendo Entertainment Analysis and Development department which was overseen by Miyamoto. This team would test its true potential by making early SNES titles starting with Super Mario World and F-Zero, which was fifteen months in the making. Miyamoto also had a hand in the development and design of Star Fox. Next, Miyamoto and the merged Nintendo EAD department that he oversaw teamed up with Square Co to work on a SNES Mario title called Super Mario RPG: Legend of the Seven Stars.

Together, Square and Nintendo took a year to develop the graphics engine - the story for this game was set in The Mushroom Kingdom which they tried to portray as best they could to be exactly how players of the Super Mario Bros. series would have expected to see it. In October 1995 Square announced that the game was 70% complete. The technique used for the graphics in Super Mario RPG was called ACM or Advanced Computer Modelling this was particularly vital in the internal design of the buildings and the objects within them throughout the game. 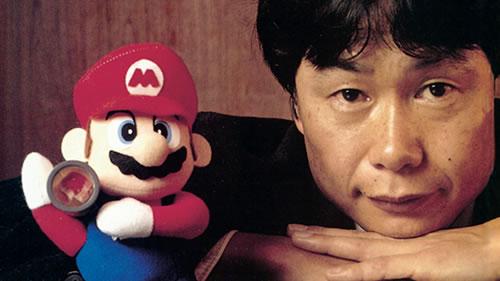 With the pace of videogame technologies advancement increasing by the day the Nintendo 64 was soon released, and there was no better a man to harness the power of this new platform than Miyamoto, he continued his ever popular Mario franchise with the release of Super Mario 64 as his debut for this console. Top priorities for Miyamoto on the development of Super Mario 64 would be character design and a revolutionary camera view system.

It took many long months for Shigeru Miyamoto and his team of designers to agree on the appropriate camera view and layout for the game before they all settled on the free-roaming 3D design which was eventually implemented. There were still however some underlying linear elements to the game pushing players to eventually end up at Bowser's Lair rather than simply explore the 3D world the game was based in. After this, Miyamoto then worked on the production of The Legend of Zelda: Ocarina of Time with the original intention of the game being played from a first person perspective to enable players to better observe the vast lands of Hyrule better.

The Nintendo 64 would also see another couple of titles of note from Miyamoto's two most successful franchises including Mario Kart 64, Mario Party and The Legend of Zelda: Majora's Mask. Miyamoto also acted as the producer of Star Fox 64.

Miyamoto was responsible for many games on the Gamecube including its launch title Luigi's Mansion - the first title-role for Mario's brother Luigi, this game was first revealed at Nintendo Space World in 2000 as a tech demo which was designed to demonstrate the gamecubes graphical capabilities. 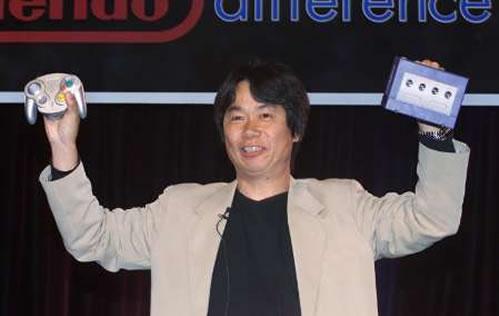 Miyamoto while still aiding the development of Mario spinoff titles also produced a 3d game series called Metroid Prime. Sadly it was in this same time period that Gunpei Yokoi, Miyamoto's friend and mentor passed away.

Other titles on this system that Miyamoto had a hand in included Pikmin and its sequel - Pikmin 2, Star Fox, Donkey Kong, F-Zero. Miyamoto was also an influence in the development of the Gameboy Advance and Nintendo DS consoles. On the Nintendo DS he helped with Super Mario 64 DS (a remake of his hit Nintendo 64 title) as well as Nintendogs.

The newest Nintendo console at the time, the Nintendo Wii was still in its development stages and known as the "Revolution" when it was announced that there would be continuation of Miyamoto's Zelda and Mario franchises in the form of new games such as Super Mario Galaxy. Miyamoto's Shetland Sheepdog named Pikku was one of his inspirations for the Nintendogs title. Another note of interest is that Miyamoto was also a semi professional dog breeder at this point.

It was around this time that Shigeru Miyamoto was noted to say "Video games are bad for you? That's what they said about Rock N Roll" in one of his press conferences - as well as confessing that it was a hobby of his to guess measurements of objects then check whether or not he was correct and that's the reason he always carries around a tape measure with him!

Since the Wii U and 3DS era began in 2011 Miyamoto is still very much playing an active role; he acted as the producer for both Super Mario 3D Land and Luigi's Mansion 2: Dark Moon for the 3DS and for Pikmin 3 on the Wii U.

After producing the above mentioned titles directly, Miyamoto has taken on more of the role of an overseer and guide, presumably to help instil a little of his unique creativity into the Nintendo producers of tomorrow in order to try and leave Nintendo in a good position when he eventually retires.

In June 2014 it was rumoured that Miyamoto, an admirer of the Minecraft series was interested in bringing the title to the Wii U though this has not yet come into fruition. 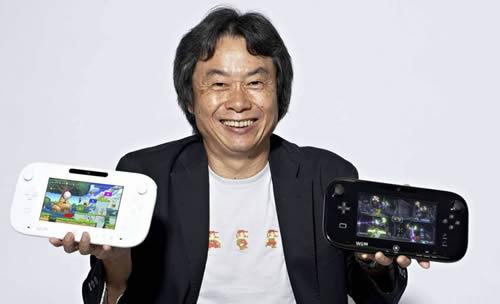 Shigeru had a role in the production of all the following titles be that on the games concepts, as a general producer, senior producer or in later years even as a supervisor. As you'd expect from the guy responsible for both the Super Mario and Legend of Zelda series' it's one hell of a list!