A look back at Luigi's Mansion
Login

A look back at Luigi's Mansion

***
gplus
Digg
Gshare
Reddit
facebook
Pin It
twitter
An unappreciated classic of the Mario series? Most certainly, and one that despite having some flaws few seemed to realise, has very much at times felt more like the proper direction to the Mario series than Super Mario Sunshine ever did.

The graphics and music to me, are some of the high points of the game. Indeed, call me slightly weird here, but this game's feel is almost like the feel found in Donkey Kong Country and the like. No, I don't mean the game feels like a tropical jungle island with a somewhat naturalistic setting, or that the game's filled with ghost Kremlings (okay, when you look at Haunted Hall, that probably would have been awesome though), but that it's got a feel more like a place than a generic deathtrap, and that the music is in a very low key ambient style throughout.

The former aspect helps it capture something no haunted house setting in the Mario series has ever recaptured since, a feel that the place was once actually used and lived in. It's true, no other haunted house settings in this series ever seem to feel like this (and truth be told, nor do many in other series). Big Boo's Haunt and the Ghost Houses, despite being fun, seem like they're just a bunch of connected obstacle course areas meant to guard an exit or star, and Ghostly Galaxy/Haunty Halls feel like... nothing at all. They don't have any personality, because they're floating platforms in a void with a bunch of ghosts in the vicinity.

You can probably picture someone actually living in Luigi's Mansion if it wasn't haunted (and if it didn't disappear, Luigi probably would live there). Each room felt like a normal part of the building, with a purpose, and in all possible respects, it seemed like such a home would be perfectly functionable for it's intended use.

Can't see that with Big Boo's Haunt. Or any other haunted house in Mario/Yoshi/Wario history. 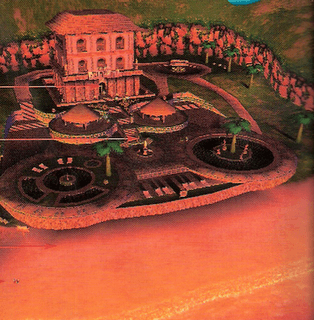 And Mario Sunshine showed us how not to have a haunted hotel. It's got ghosts, but I think 'haunted hotel' as more like... a grimy, somewhat run down creepy place with axe wielding psycho ghosts than something out of a travel brochure.

Music wise, outside of boss battles, it was much the same. True, the battle music for Bogmire/Boolossus/King Boo was outright epic, but Luigi didn't go exploring the mansion with some blaring orchestra playing the title theme at full blast, possibly with him blasting everything away like Rambo. That kind of music worked well for this game, and truth be told, doesn't seem to show up so much any more (outside of indie games using it in the exact situations the norm would work better). Really, it seems nowadays, it's very rare for Nintendo to just make a game with the music being subdued and not so in your face type 'epic'.

Here's a game design tip: Subdued, low key, often creepy music can have just as big of an impact as the ultra 'epic' finale style themes filled with latin chanting that Super Mario Galaxy and it's sequel employ. This may be awesome in one way:

But you don't have to be 'epic' to make your music memorable, and the above style isn't what every game should go for. It's what Super Mario Galaxy should go far, but it seems the whole industry is trying to make their games like summer blockbuster movies, or at least the grand finale part of them where the hero goes one man army through about a million enemy soldiers.

You can also go for more ambient, low key music to suit the game. Luigi's Mansion is more arguably that kind of game than the loud over the top Mario Galaxy kind. Donkey Kong Country has a few good pieces of music to demonstrate, but this classic speaks for itself:

Luigi's Mansion was a good game partly because it felt so different from the standard game of the time (and even now). In an era where it seems every game is trying to be bigger, more over the top and more 'epic' than the last, in the style of Super Smash Bros Melee and Brawl, it was nice to have a more low key Mario game with a more ambient feel to it (and trust me, while Sunshine was okay here, it probably made the music just a bit too lively and upbeat for the game's setting). This is pretty much the standard in Luigi's Mansion, for normal rooms:

It's not loud and lively music meant for action in any extreme sense, but it fits the haunted house setting so much better than the recent music in the Galaxy games meant for the same type of setting:


Is the above trying too hard?

Music wise, it also varied it depending on where in the mansion you were and what was happening. Ironically, the Mario Galaxy games (and I guess Sunshine), despite being good at changing the music in Battlerock/Dreadnought Galaxies or the Bowser fights, kept with the same heavy piece of music all through regardless of what was actually happening.

As far as gameplay goes, it was a good spinoff game. Not as good as the actual proper Mario platformers, but it really wasn't intending to me. Heck, I'd say Nintendo's decision to use it as a launch game was likely both one of the best and worst possible decisions, in that while it did sell far more than it likely would have done otherwise, a bunch of people probably bought it thinking it'd be a Mario 64 like platformer (and then discovered the completely different style, lack of jumping and Poltergust). Probably put some people off from the Mario series to be honest, and meant inflations for the game were pretty much through the roof and near impossible for the game to attain.

Length and possible sequel wise, I think a lot of people miss out one aspect about the game, that in all honesty, it would be rather difficult to either make the game too mich longer or have a literal 'Luigi's Mansion 2' sequel. The first one sounds a bit crazy, but it's true, it seems even the creators were losing focus and trying a bit hard to innovate by the end of the game.

Blowing up the moon with a comet is hardly something that really fits the game well. It was cool as heck, but it really was the kind of thing Super Mario Galaxy should have made a mission out of rather than somehow connected to the observatory (don't ask me either, apparently walls disappear and make pathways into outer space in the Mario universe). Then we reached chapter 4, and apparently ghost toy soldiers and a human thing that stuffed himself in a jar and become a ghost are the norm now, and somehow a room on the second floor is completely upside down for no apparent reason and flips over when you clear it.

Okay, that's normal for Mario as a series, but it seems like the game went from 'remotely normal seeming haunted mansion' setting to 'how much crazy/wacky stuff can we throw in which would do better in an actual Mario platformer?' Not that the earlier chapters were that normal, Bogmire's mere existance is probably the greatest mystery in the Mario series (and the fact Bouldergeist seems to be the same species raises even more questions), and hey, it's meant to be weird in general, but it often felt a little out of place (okay, especially the toy soldiers), almost like the rumoured 'realistic police sim with a fire breathing dragon as a boss' or the 'medieval Japan simular Sony's so well known for, based on real life with a giant enemy crab'.

On the flipside, we got the awesome black out (I wonder why this never happens in actual horror films, why would the lights keep working if all civilisation seems have died and the dead rose from their graves?), which at least had a pretty creepy element to it (come on, ghosts/monsters that only appear in the dark? Bit like Doctor Who, except about five years earlier than that specific episode!), as well as the pretty cool Vincent Van Gore, who both explained the minor non specific ghosts found all over the place and provided a nice quote for a page on TV Tropes.


Come on, the above is a very effective scene (no, not the door).

Note: Why is it popular Youtube gamers can't play games well if their lives depended on it? It's not hard to catch some ghosts,

It just seems however near the end, the attempts at keeping the game interesting pushed the game's suspension of belief more and more towards breaking point, with the later ghosts seeming more and more outlandish and bizarre than the earlier ones.

Final boss was good though, albeit maybe having 'Bowser' show up in some form was a little too predictable, maybe slightly undermining King Boo's up until then in the game successful reign as the lead villain.


I would have personally thought Luigi would be LESS terrified of Bowser, not more though. Come on, you beat him tons in the past coward!

But as I said, I don't think the game could have really been much longer without honestly making people tired of it. It's a good game, but the core gameplay is kinda less... possible to do interesting things with than the standard Mario gameplay, and they were definitely running out of ideas in the final area as it already is, with quite honestly the general limit for possible different rooms with different purposes being reached (when you have to look up many room names in the dictionary, then you know that's possible at that point. And the fact the mansion has an armoury makes me wonder just how rich the old owner must have been...) Could there be a good sequel? Absolutely, but it can't be in another mansion. It was a good premise the first time, but it's not an easily recycled one, and the base story would be just unbelievable a second time. Maybe move it to an actual castle or private island landmass or something, like the standard horror film settings? Not sure what you can add room wise, but at least you could potentially include dungeons (real life meaning, not Legend of Zelda meaning), a courtyard and maybe the castle walls as rooms. Heck, maybe a small haunted town or village would be a good sequel location for the game, since you could use the various shops and buildings as themes, like having old shops, or parts of an old church and crypt as rooms to explore with the flashlight and poltergust.

But yes, Luigi's Mansion was a good game, and had a lot of good memories. Just it got a bit over the top in some aspects, and a sequel just couldn't be the same premise/storyline/setting as the original.