It should by now be a well established fact that Nintendo really, really loves nostalgia. Look at all the recent enemy comebacks in New Super Mario Bros Wii or Super Mario Galaxy 2, the entirety of Super Smash Bros or the fact Donkey Kong Country Returns will have 90% music remixed from older themes in the series for evidence of that.

But it has to be said there is no series better than the Mario one for the sheer amount of remixed music going around. No, not the fan stuff that makes up 90% of Youtube, the official songs Nintendo seems to tweak and put into all the spinoffs. So here's a nice look at all the excellent music remixes Nintendo has made for the Mario series thus far, and yes, this means a lot of Youtube videos.

Super Mario Bros Theme
Ah forget it. It's been used in so many different Mario games that trying to list all the remixes would crash browsers, scroll the page beyond recognition and end up with at least fifty games listed. 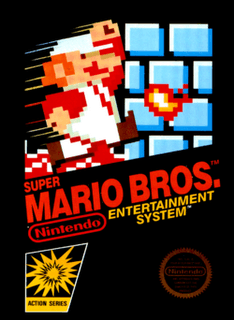 All you need to know. The list of remixes was long even before Youtube got to it..

Let's just say the music went from level music to the iconic theme for the whole game for a reason.

Luigi's Mansion
Also known as the series Nintendo seems extremely obsessed with remixing the theme music of. Not that I blame them, but something can certainly be said about a song so apparently popular you could replace pretty much the entire music tracklist of its original appearance with remixes of it and probably have some to spare. 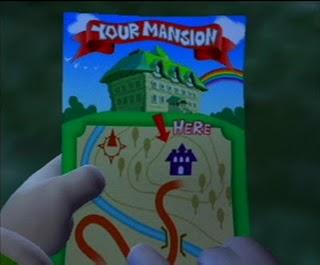 That way to music remixes. And a mansion nothing like the one in the brochure.

Also quite funny to realise is that most of the remixes are probably better than the original theme. So here's a look at all the remixes of the Luigi's Mansion music in Mario games.

Mario Super Sluggers
First up, Mario Super Sluggers. No, this list isn't in chronological order, because I'm lazy. And yes, this is probably one of the least imaginative of the remixes. Still, listen to it and say you can hate it:

Just what every corny horror theme needs! Stock animal noises in the background!

Mario Power Tennis
The game which has at least five different remixes of the Luigi's Mansion theme! The normal and gimmick court themes are quite dull and standard for the course, but the match point one sounds like it'd be used in some kind of satanic ritual or boss battle, and is all the more epic for it.

The most epic remix of the Luigi's Mansion theme ever? I can almost see this being in Banjo Tooie/Donkey Kong 64 style and used for a boss battle.

Mario Kart DS
And for the next trick, the Mario Kart DS version. This one is pretty much an old school piano version of the theme, and while not as interesting to listen to as some of the others, certainly would feel right in a movie about the game shot in some kind of olde worlde sepia tone.

Almost like you're watching an 80s made film of the game!

Another excellent piece of music, all thanks to the fantastic music composers and artists working on Super Smash Bros Brawl. Goes well with the stage too, unless for some insane reason someone decided putting Tetris music in the background was supposed to fit the mood.

And no, the Airship Theme and Castle music don't fit at all here. They're good, but there's definitely a time and place for everything, and this isn't it.

As usual for music, Brawl delivers.

Good, but a bit cheesy.

Very nice how E Gadd uses a futuristic remix of the theme for his motif in Mario and Luigi.

And again, albeit with a more homely feel.

Another classic song, and by the amount of remixes, it seems to have almost beaten the Bob-omb Battlefield music in becoming the unofficial Super Mario 64 theme song.

Mario and Sonic at the Winter Olympics
Oh boy, this game isn't popular with the Mario fandom, nor very good, but it had some great music as the below shows. It's not quite as overly flashy as the Galaxy 2 version, but it's about what I'd expect the original Mario 64 one would be like on Wii strength hardware. Bravo, Sega did something right in a recent game with Sonic in it.

Excellent, but the sequel's version kinda blows it away in terms of quality.

Everything is better with ominous latin chanting, and this is no exception. It's almost like a part capella from what I can tell. Suits Bowser's Gravity Gauntlet perfectly too, especially with how the level is about breaking into Bowser's Castle (hey, title drop!)

It's not often the low quality MIDI remix is the better one, but this is a rare exception to the rule, with the handheld song. Really, maybe it's the eight bit way the music has to be made to work in a Game Boy game, but the more crude way it's been... well, composed really does seem to install more terror into the player than possibly even the SNES original.

Random Fact: The other exception is the MIDI version of the Syrup Castle map theme for Wario Land 1, which turns a subtle background beat into something foreboding as all can get.

Another one for the obscure records, Itadaki Street DS takes the already extremely catchy Bowser theme and outright makes it sound better. Yes, it's already been remixed for the castle and Bowser themes of Super Mario Kart, but the below kinda kicks it up a notch:

Anything from DDR Mario Mix

I'd never think I'd ever hear a remix of Mario Kart music which would make me think 'this is epic'. Now I have. Okay, there was Waluigi Pinball in Brawl...

Not the only time the above was done. It's also the basis for Glittertown in Wario Land Shake It (Wario meets Las Vegas!) and I think WarioWare's music.

Yeah, the above is quite cool too. Reminds me of pop music. Pity about the fact the Shake King in Neon looks so ridiculous.

In other words, like two mirrors placed opposite in a hallway, it's a recursive passage that can shatter the fabric of reality due to remix overdose. But it's a nice song.

Yeah, the Crescent Moon Village theme from Wario Land 4 has appeared in the original WarioWare as cut scene background stuff. Not many people pick that up, but it's a very nice reference to the game, and one which makes the scene of Mona and the gang chasing Wario for their pay remind me of Wario's escapes in Wario Land 4...

Really though, no one can hate the Crescent Moon Village music. If you do, you have no heart. 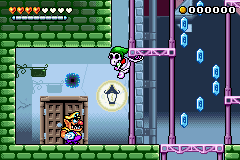 Really, the above location is awesome. Only Mario amateurs disagree, right?

So what about those remixes eh? Heard any interesting remixes of classic Mario tunes in any recent games? And do you think they'll ever reach the stage where you'll hear a DDR Mario Mix 2 remix of the Mario Kart version of Galaxy 2's Cosmic Clone theme? Or would that completely lose what's being remixed in the first place?

Nintendo loves music remixes. I wonder if they're even going to remix the remixes of the remixes? Meh, wouldn't be surprising.