Because to be perfectly honest, none of the power ups in the 3D games seem to exist to be anything other than a glorified key to beat a puzzle or unlock a door with.

And this is Nintendo's biggest issue with their current series, they seem like they're more focused on making puzzle based games than ones with similar gameplay to their 2D counterparts.

2D Mario was a platformer, but frankly, most of the 3D games ae basically puzzle collethathons which could really do to be a bit more like the 2D ones gameplay wise.

Why is the Wing Cap/Red Star timed? Why make the Fire Flower timed, or the Ice Flower? They should really just work like the power ups of old, you kept it til you got hit, then you'd have to pick it up again to use it again. 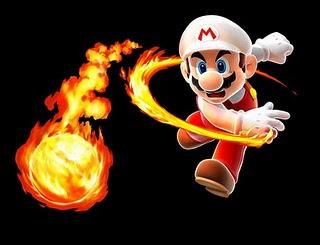 Would this be overpowered? Possibly, but let's face it, that's part of the fun. Going into those fortresses, killing Roto Discs with the Tanooki Suit's statue ability, throwing a single hammer to one hit kill the poor Boom Boom at the end of the level... Heck, remember flying over all those levels in Super Mario World with the cape?

Because to be honest, it shouldn't matter if they're overpowered, as long as it's fun for the player. *** what the developer personally wants, the customer and fan is king here.

If any games did this somewhat right, I'd say it might be either the Banjo Kazooie series with the transformations, or Donkey Kong 64.

Oh, and another thing, let us bring power ups between levels! Why can't Yoshi just be brought into any level? Why can't I see how the Boo Mushroom would work in the Haunty Halls Galaxy, or the Cloud Flower in the Slipsand Galaxy? Sure, it breaks your precious puzzle designs, but didn't getting a star at the beginning of a level in the 2D games, or just the existance of the Cape in general?

Or in simpler terms, when Mario flies into the distance and dies with the word 'Too Bad' because he went off the path slightly. 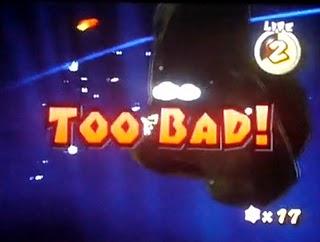 Invisible walls for the next generation!

There's no reason at all to use this, and quite honestly, it's a reason Super Mario 64 was such a fun game for the time.

Again, Nintendo should reward, not punish innovation and skill in games, and consider that it's the player's choice how they should beat a 3D Mario level.

Especially when they seem to be some kind of moon lander inspired mini game, like Rocket Rush in Donkey Kong Country 3 or Launchpad Labyrinth in Wario Land Shake It.

Considering how I've seen that kind of gameplay a fair amount, what game was ultra popular in the 80s to warrant the gimmick being common in platformers?

But it doesn't end there, it seems nearly every 3D Mario game to date tends to have at least one aggravating, badly controlled mini game which really isn't particularly fun to play and requires odd controls.

In Super Mario 64, to some extent we were spared from this. Thank God.

In Super Mario sunshine, you had two: Mud boats, and blooper surfing. Guess what happened when you hit a wall using them?

In Super Mario Galaxy, you had the star Ball, Manta Ray and Bubbles. Which one you hate here will depend on the individual.

And in Super Mario Galaxy 2, what do you know? Fluzzard. Bad control scheme, flying through rings for Comet Medals and having to about a 90 degree sharp turn in Fleet Glide to get from the second ring to the actual track.

Fluzzard; the bane of many Super Mario Galaxy 2 players.

But really, why do we need all this in our Mario games? Why not one which is a 100% platforming and exploration instead? Sadly, this seems to apply to nearly everyone who's ever made a platformer, you can't find a single Sonic the Hedgehog game without some new gimmicky control scheme, and Rare loves having at least one awkward mini game in each of their games (*** you *** Bother!) 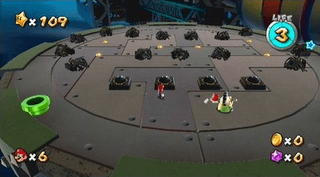 Not a good idea. Kill it with bombs!

Enough said. No really, they always have too little time to be practical, have reduced hundreds of message board users in nervous wrecks who go into a rampage of swearing due to how bad the contols are, and the concept itself was already a bad one in the first game/

First bombs destroying trash, now fireballs destroying crates (why it is with video games and crates anyway?), how about any future Mario games just not bring back this horrible idea?

Nah, that'll likely never happen. Nintendo developers seem to have some crazy obsession with ideas everyone else thinks are bad and some hatred of things people would actually like. Why else didn't we get the Koopalings for about ten years? 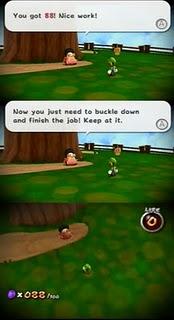 Where the B Grade is fatal, and winning rather than trying makes all the difference! Great aesop Nintendo!

The one thing about mini games and levels I never understood. Why does failing anything in the series kill Mario instantly, even if he's not hit anything actually harmful?

Failing to collect Purple Coins = death by Gearmo. Failing to beat the Chimp's Challenges? Death in most cases. Lost a footrace? Mario dies. Failed a mini game like Blooper surfing or Manta Ray surfing by being too slow? He dies again.

Why? Why not just send Mario back to the beginning of the level and let him try again safely? Why does everyone in the Mushroom Kingdom apparently want him dead for no apparent reason?

Some things in Mario Games are just plain bad ideas.