Death, Ghosts and Strangeness in the Mushroom Kingdom
Login

Death, Ghosts and Strangeness in the Mushroom Kingdom

***
gplus
Digg
Gshare
Reddit
facebook
Pin It
twitter
As you may have remembered from quite a while back, there was an article here which was an investigation of ghosts in the Mushroom World. It instantly showed just how inconsistent and messed up the whole idea of ghosts is, and how every game seemed to redefine the abilities and purpose of the undead, and also how fire would sometimes kill Dry Bones and sometimes now. Well here's another, even more confusing thing to investigate... how the heck does death work in the Mushroom World?

And first of all, it's nothing like how it works in real life. Well, I don't think those executives in Nintendo's main Japanese branch would quite like it if the next game had Mario and Luigi get randomly struck by lightning, killed and replaced permanently by Yellow Toad and Blue Toad from New Super Mario Bros Wii! End of an era! News sites comment on the end of Mario like crazy! Sales plummet to about zero! So yeah, it's not as if anyone of importance to the series is going anywhere due to contractual immunity.

Still, the whole issue has gotten... confusing. In Super Mario Bros 1 to World, it was fairly simple. You died, and you ended back at the start of the level with one less life, and then some game over may have happened if you ran out (note the word may because let's face it, no decent Mario player has ever really seen a game over screen in the last twenty years). It was simple, it was fairly well explained, and quite frankly, made a whole lot of sense (well, for the Mario series anyway). 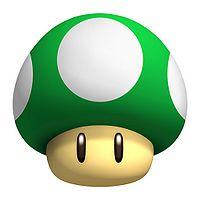 But then... we get the later games. The RPGs for example just screwed up this simple logic twenty two ways to... something. Super Mario RPG featured no 1-Up Mushrooms, but some weird items called 'Pick Me Ups' that were probably nabbed from some Final Fantasy game. Indeed, that's almost quite prophetic, sometimes even Intelligent Systems and AlphaDream seem to forget they're making a game about Mario sometimes.

Paper Mario brought in Life Shrooms (what the ***?) which revived Mario or a partner when they 'died' (and I bet tons of Mario fans angrily cursed the screen after Mario's partner took the last Life Shroom automatically, securing Mario's fate in about ten seconds time). And Mario and Luigi had different types of normal 1-Up Mushrooms, and surviving a battle would bring any 'killed' combatants back to life afterwards (what the heck? This is Mario, not Pokemon! People don't just 'faint' in battle here!) 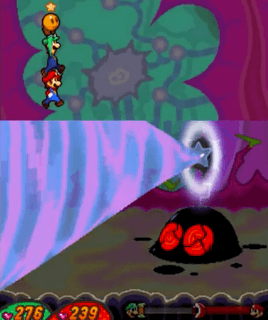 Above: Please don't try to tell me that town destroying laser is merely powerful enough to knock Mario unconscious...

Never the less, this is where it started making no sense. How can you faint from being hit by a gigantic laser beam as high as the screen? Saying it's a ''KO' is pretty much a cheap way to attempt to seperate what happens in gameplay to what happens in 'story'.

But Super Paper Mario? That pretty much caused more problems with the concept than ever before. The 'until your games do end' bit was an interesting little addition, but really, a good amount of how the game handles Mario being 'killed' and the 'afterlife' makes no logical sense. How can a character cause him to 'die' and go to the '[Underwhere' in a cut scene? Are we supposed to believe that no one thought of just using a 1-Up or something on the party? How can there even be a logical 'afterlife' in a world where a whole bunch of simple items can apparently revive the dead? The stories of how the character in the game 'died' were all quite funny and all, but they're all things Mario has just lived through and recovered from perfectly well due to a stockpile of lives. Are we really meant to believe no one other than Mario bothers to bring any form of literal life insurance?

Or that apparently destroyed universes have a 'floor'?

Or how no one 'killed' by the villains actually thinks to have some form of healing items?

Heck, what of all the weird things that can bring someone back to life in Mario's world? Do we really need so many? What do we have here...

And then there are ghosts. Well, Artemendo's article covered how weird most of the stuff involving them in the Mario series is, but how come they even really exist? Is there a time where a Mario character can actually die permanently despite the presence of 1-Ups? Or are the ghost characters just that careless? Luigi's Mansion for example is problematic here, because it's based in the Mushroom Kingdom, but seems to go (by the ghost back stories) as if it was based on Earth or something, considering many of the ghost fates and personalities. It's even more insane when the characters are apparently meant to 'leave this realm of existance', ala Princess Shokora in Wario Land 4 and nearly the Toad ghost thing in Paper Mario the Thousand Year Door.

And above... Fawful flies out a window, explodes, comes back as a ghost in the final battle... and is perfectly fine by the next two games. Huh?

Still, the question of death leaves a few interesting philosophical questions about the series. It might actually be why villains like Bowser never surrender... well, think about it. Why should they? They pretty much can't be got rid of for more than a short time, so there's no real restraints on their grand ideas of evil. Why would they think twice about world conquest if there was no possible negative consequences to their actions?

Bowser is a good example here. What can anyone in the series do to deter him? Thanks to both his general invincibility and pretty much lack of any real permanent death, just about nothing. Arrest him? You kidding? Send a bunch of Toads into Dark Land, and while they won't 'die' per se, they likely won't return. Execute him? How? He fell into the centre of the universe as it exploded in some kind of supernova, it's not going to be particularly effective. Besides, Bowser Jr or the Koopalings will just bring him back with a magic spell or that cauldron thing from New Super Mario Bros. 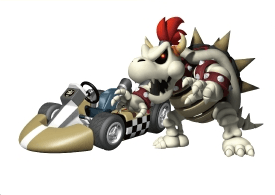 Although when your skeleton form is about ten times better, who really wants to be standard old Bowser again? Being a skeleton makes you fireproof!

Indeed, this is all a bit of my personal theory about the Mario series universe. Why is it so messed up? Why is civilisation so nearly non existant in most cases? Because to be perfectly honest, the screwed up physics and such make a normal, Earth like society completely hopeless. Any form of morality is pushed to the breaking point by death basically being a revolving door, as is any kind of meaningful legal system.

Any kind of order is destroyed by invincibility items like Stars and Rainbow Stars. And heck, any form of consequence at all is completely gone due to the Retry Clocks in Mario and Luigi Bowser's Inside Story. 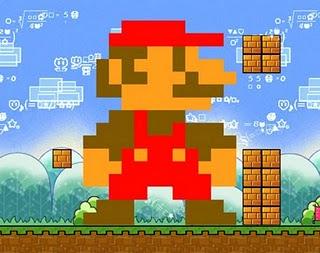 Er... Mario? Maybe bring one of those to the final boss fight next time?

The last point is an interesting one. Think of Bowser's Inside Story as a game. Those boss battles were far easier when you could just retry after your every defeat, with the knowledge you gained, correct? Well think of what someone in the series could do with one in a more practical situation. Every bad event a Mushroom Kingdom citizen faced could be rewound and retried for all of infinity until it goes according to plan (or until the clock supply runs out). And in most cases, no one will be any wiser to it. Those Mushroom Kingdom politics must be interesting to say the least, and likely corrupt as *** for it,

Above: The most philosophically overpowered Mario item ever created?

Or what of morality and 1-Ups? You don't know how many moral issues from the real world fall flat in a universe where death isn't the end of things. It goes from 'come up with some plan based on utilitarianism' to 'oh just die and come back later to fix the issue'. Or on a more mundane matter, it provides a nice, clean way of getting out of the whole wedding vow thing (see the Super Paper Mario intro, there's likely another reason the 'until your games do end' was put in).

So how does the whole 'death' and likely 'final death' thing work in the Mario series? Because no game gives me reason to believe the story and the gameplay mechanics are seperate, and as it is, the games are rather contradictory about this. Maybe the fact there's an easy way back from the dead is what killed dead the Mushroom Kingdom as a possibly successful country in the same way Princess Daisy's bad governing destroyed Sarasara Land?

First ghosts make no sense, now death? Is Magic A not Magic A here?