Larry Koopa, also known as Cheatsy Koopa is one of Bowser’s eight children, and he is the youngest of the seven Kooplings. We haven’t yet seen much of Larry’s personality, however He seems to have an interest in sports, as he uses bombs as bowling balls in Hotel Mario, and he uses a tennis racket to counter his fireballs in Mario & Luigi: Superstar Saga. Ironically though he has never appeared in any of the sports games. 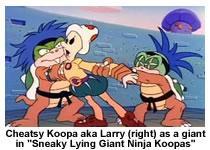 faced in battle before the others in most games.His wand gives him less magical abilities than his siblings as well. In The Adventures of the Super Mario Bros. 3 and the Super Mario World animated series, Larry was known as Cheatsy Koopa and he was given a personality to match his name as he was very devious.

Appearance wise Larry's skin tone is the same as most of the other Koopaling's, having

the same yellow and tan skin complexion, as well as a green head like most other Koopalings. Larry can easily be recognized by his spiky blue hair. He wears the same metal, spiked cuffs the others do, but he also has his own shell design. His shell is light blue, lined with a white encasing; however his shell was originally green in Super Mario Bros 3. and Super Mario World.

The adventures of Super Mario Bros. 3 wrote about Larry Koopa's personality and mannerisms as below:-

He loves to tie people up and then challenge them to a foot race. In reform school, he copied so many test papers, he got writer's claw. His hobby is counterfeiting Gold Coins, and he does such a great job of it, that Koopa has put him in charge of the Kastle Koopa treasury, where he happily spends every day cheating his brother and sister Koopalings on their allowances. When Koopa wants to be sneaky and devious, he calls on Cheatsy.

Some quotes from Larry Koopa from the Adventures of Super Mario Bros. 3

Again like all of the Koopa Kids Larry doesn’t have many friends and just stays within his own family.

Super Mario World - This was Larry's second appearance in the Valley of Bowser. He would sit on top of a tilting platform on top of lava and was immune to all of Mario's attacks. Larry would need to be jumped on to be made to fall off his platform. Again Mario defeated him and gained access into Bowser Castle.

New Super Mario Bros. Wii - This is where Larry makes his return and is also in 3D. Larry is boss of World 1, which is similar to Super Mario Bros.3. Larry's abilities are to cast magic spells, jump and once hit will start spinning in his shell to try and cause damage to Mario. Again after 3 jumps to the head Larry will be defeated. The next battle is in his castle with him using the same tactics, however because of the moving room this makes it more difficult.

Mario is Missing - In the PC version Larry is the first boss however, it takes just one blast from a fire flower to defeat him. Larry needs to be jumped on 5 times in the NES version to be defeated.

Yoshi's Safari - Larry is the boss of Crescent coast in this game. Larry rides round hidden in a submarine that has a purple face and blue nose, and Mario must shoot aiming for the nose to open it up and reveal Larry.