A look at the Mario series villains
Login

A look at the Mario series villains

***
gplus
Digg
Gshare
Reddit
facebook
Pin It
twitter
As Mario fans, you should all know about Bowser and his various plans to take over the world. From jumping up and down on bridges randomly to fighting Mario in a star shaped arena surrounded by high powered explosives, Bowser's gone through a fair bit, and has been about as awesome in each and every game.

But Bowser isn't the only villain in the series. There have been others ranging from the excellent, such as Wart or Tatanga, or the RPG villains, to the absolutely awful, like the Jungle Beat villains or the Black Jewel from Wario World. So here's a look at the rest of the villains in the series, albeit in a rather over the top way.

First up as a non Bowser villain in the Mario series was Wart, back in Super Mario Bros 2. Well, I presume he was originally the main villain in Doki Doki Panic, but the point still stands. As per Bowser tradition, he decided to stick a vegetable spewing machine in the middle of his arena (why do bosses do this?) and promptly got killed via food poisoning via Mario and friends.

Above: Frog King, weak to vegetables... it's just like a 90s cartoon series special episode!

Did he survive? No one will ever know, he never appeared in a Mario game again. Considering he appears in The Legend of Zelda Link's Awakening as well, he has a tendency to appear only in dreams, so maybe he just doesn't exist in reality.

Next up were the two Super Mario Land games, which did the interesting thing of tying the plots and villains together... well, until Wario took over the franchise and everything got thrown out again. There was Tatanga, the second most wanted returning Mario villain, who turns out to have been hired by Wario to distract Mario while Mario Land was being conquered. He captures Daisy, for reasons unknown.

Wario came as the villain in the next game, as an evil counterpart to Mario who brainwashed the inhabitants of Mario Land and took various golden coins for whatever purpose. Now, Wario is awesome and all, but where did this mind control ability suddenly go when Wario got his own series? I mean, imagine Wario Land if Wario turned half the bad guys against the final boss, or WarioWare where he finally found a fool proof way to stop his employees asking for wages. As per tradition, Mario beats him easily, but not for lack of trying.

There's also King Boo in Luigi's Mansion. Who... kinda got lost his skill at combat after his first appearance. I mean, who goes from powerful magic and robot Bowsers to looking drunk and living in roulette wheels? 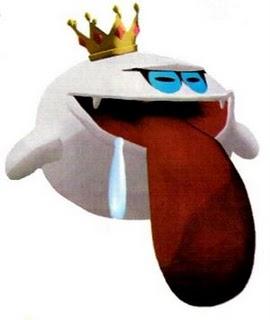 Above: The image of a fallen villain.

Note: Mario Wiki says Luigi's Mansion King Boo and Mario Sunshine King Boo are apparently different characters. Got to love people who think the Japanese canon is some kind of God who must be right in all circumstances, and got to love how so many Mario fans think like anime fans. One name people, one name. Yes, he was called 'Boss Teresa' and not 'King Teresa', who cares. Petey's called Boss Piranha in Japan.

You've also got the Mario RPG bad guys. Smithy is probably the ultimate non family friendly villain in the series, and also likely one of the toughest mentioned in the article to actually beat in combat. You can almost see the tabloids going crazy about the evils of video games after his outburst late in Super Mario RPG, tying it to numerous 'rises in crime'and likely missing the point that's he's a villain in the process. This for example would be almost hilarious to send to Fox News or the Daily Mail:

Then we could get rid of all wishes and create a world filled with...WEAPONS!!

Cackletta would be the next Mario RPG villain (that's not Bowser) and start the rather odd trend of nearly every main villain until Bleck being female. She tried a rather different way of taking over the Mushroom Kingdom in stealing Peach's voice, but ended up resorting to kidnapping Peach anyway, like what he seems to happen in every single game by contractual reasons.

Fawful was/is still one of the better villains, although pretty much only because of his speech and the rather overinflated view of himself.

The Shadow Queen was the next Paper Mario villain, and part of the series trend to 'every game, up the ante in how powerful the main villain is'. Indeed, you can almost see the Mario RPG Cerebus Syndrome starting right about now, with each and every game onwards getting more and more bleak.

Case in points, the Shroobs and the whole game of Partners in Time in general. It's a good game, but it seems almost like the creators were trying to make it utterly depressing. Alien invasion, soul snatching villain plots, towns being destroyed in massive attacks and much loved characters being 'killed' just two minutes before the final dungeon in order to hide the depressing thought that there was a worse villain than the primary one.

Maybe this is just a personal opinion, but I'd say this was a good example of what might be 'too dark' for the Mario series, since it kind of made much of the humour from the rest of the series non existant. The villains also weren't particularly... well... funny, or even deep in personality, or just about anything.

Count Bleck was an interesting villain. In fact, the interesting part about him was that he was pretty much the only villain in the series with some kind of motivation other than 'power' or 'just kill everything'. Not a very good motivation mind, he's obviously got some serious mental issues to want to destroy reality in exchange for losing someone he loves (or as a cartoon series I do not wish to name said 'that's not a very good reason at all!'), but it did bring in a lot of existentialism vs fatalism philosophy into the game. Seriously, the whole plot line is probably the most outright philosophical the series has been in all of its existance on at least a surface level.

Dimentio is another fairly interesting villain, and not just for the humour. No, it's because he's basically the most ridiculously over the top, intelligent gambit creator in the history of fiction. Really, the game hints he wrote the Dark Prognosticus. It then hints he may have wrote himself into the book in preparation of some random lunatic like Bleck carrying out the prophecy so he could get hired. Considering those who read the thing are said to go mad, that probably says a fair amount about he who may have wrote it.

The Dark Star is a pretty cool villain, and in concept he's basically the Black Jewel from Wario World done correctly. Personally though, I'd say his strong point was having an interesting few boss battles, because while the fights themselves were awesome, the whole serious way the character was portrayed and stuff ended up showing a villain who is basically omnicidal with no real reason for it:

Soon this kingdom will vanish along with all who dwell within 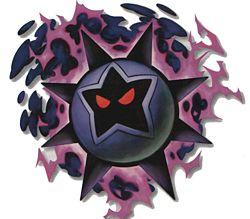 It does have some excellent artwork though, possibly the best character art (may not be official, but was on Mario Wiki) for a villain in the series.

But the Mario series isn't the only series with interesting villains. Donkey Kong Country (and the later Donkey Kong games) series had a few good and bad examples as well.

You've obviously got K Rool himself, who promptly sets an impression of 'awesome' from his pirate theming in Donkey Kong Country 2. He's got the sense of theming down in a way only rivaled by the Super Mario Bros Super Show and King Koopa, and he's the only villain in any Mario related game to have actually tortured his prisoner outside a boss battle.

KAOS was awesome as well, in my opinion. Okay, it had a pretty crappy boss battle, but come on, it looked like the Terminator and had a bunch of names and such that outright said 'run away very quickly in the other direction'. KAOS Karnage? Not a pleasant sounding level name.

Sadly, the later games haven't exactly lived up to this. The Jungle Beat monsters were outright pathetic and looked like Wario World rejects, and while the Tikis in Donkey Kong Country Returns seem a bit better, they still have nowhere near the personality of the standard Kremlings and K Rool. 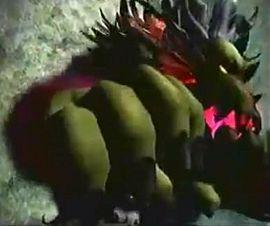 This thing has no design, personality or style in the slightest. Bring back K Rool.

Finally, you've got the Wario series. Which can basically be translated as 'villains get more and more mediocre up to Master of Disguise', then get slightly better with Wario Land The Shake Dimension.

Think about it. You've got Captain Syrup, who is awesome and a plain interesting character that near everyone likes.

Then you've got Rudy who is at least EVIL to a tee, albeit somewhat less interesting and probably less likely to return due to being both monstrous and gigantic.

And then you get the Golden Diva, which is just completely lacking in a personality and seems tacked on at the last minute. ***, even Cractus or Catbat would make better final bosses and characters than this THING did.

The Black Jewel looked slightly ominous, but had all effect killed by a battle in which it had a massive one attack. 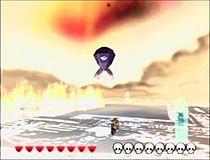 Above: He looks awesome and shoots fire. Does he do anything else? No.

Finally, you get Master of Disguise, which has two decent/good villain characters (Count Cannoli, Carpaccio), and the real bad guy being this badly done Princess Peach knockoff who looks like a bad cosplayer at some *** anime convention. No really, can anyone honestly think this looks like final boss material?

Good God, this is the worst final boss design I've seen in my life, and the battle is no better.

Finally. Wario Land The Shake Dimension brings us the Shake King. Well, he's better than the last three losers, and he can at least fight a final battle in a way which Bowser could learn from, but he's not exactly the best character design.

Still, you have to admit, the Mario series and it's various spinoffs and related series have had quite a few interesting opponents not called Bowser. Pity we won't see any of them again.

Chance of someone other than Bowser being the villain in a 3D Mario platformer: Zero percent.