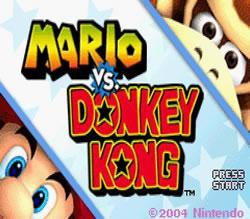 Introduction
From a long time ago that both Mario and Donkey Kong became some of the most famous characters in the videogame history, and they have already appeared in some games together (like in Super Smash Brothers, or whatever the name is...), but what if they had to fight each other for a real battle, I mean, only those 2? That's the purpose of this game, to get an answer...

Game play
As soon as you enter the first level you will notice that the objective of this game is quite easy, you just need to recover some small super Mario clones that you find in each level of the game. Now, each level have 2 scenes, in which you can collect one small super Mario clone and up to 3 presents, and if you get those 3 you will be able to play a mini-game, which may grant you extra lives or nothing at all (only if you really unlucky :P).

As you may think, this would be quite boring, however they designed the game in a way that it won't become so easily boring, for example, before facing each level you will spot a small scene which makes you get in touch with the basics that you will need for that level, or for the following ones, which mainly will be new moves that the character that you control, Mario, is able to use. Once you finish all the levels in a specific section you will enter a new level in which Mario will be followed by all the small super Mario clones he recovered in the levels from that section, and the target of those levels will be trying to put all those in a toy box (hum, you didn't understand why? Read the story of this game!).

Finally, the final level in each of those sections will be a direct confront with Donkey Kong, meaning that you will need to see his actions and, based in what you learned in the levels before, master a way to defeat him. And all this comes in shiny 6 sections! 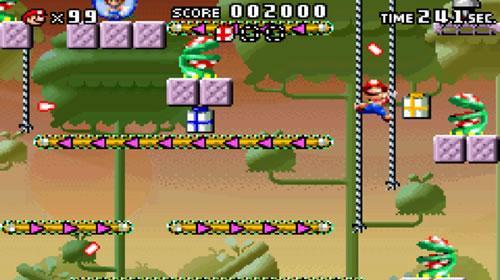 Story
Donkey Kong was watching TV on his home, and when he saw a certain commercial he went mad and started trying to get all the super Mario toys. Fortunately Mario spotted him, and now he will have to face Donkey Kong in order to get all the boys back.

Graphics/Sound
The graphics are quite shiny and fluid, like those of most gba games. As for the sound, it's not as good as it should be, I mean, at first you will enjoy it since it will seem good to you, but after some time you will get bored of it... 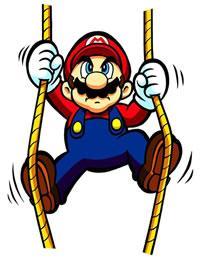 It has a high play time, since there is a star that you can get in each level, and those mean that you made an impressive score on the level. Also, you can replay the levels for fun or only to try to get all the presents, but willing to get all those things depend on the player. As for replay value, I guess it also depends on the player, since I couldn't play this game for much time but my brother could! =|

Final Recommendation
I guess I can consider this a nice game, however only people who like arcade-style games will fully enjoy it!