***
gplus
Digg
Gshare
Reddit
facebook
Pin It
twitter
With Super Mario Galaxy 2 and New Super Mario Bros Wii reintroducing classic enemies in the hundreds, it seems like a Mario fan's dream come true. Magikoopas, Firebars, Rocky Wrenches, Mecha Koopas, Grinders and even Boo Rings seem to have made a recent comeback in the Mario series, and to say the last two games were non sexual fanservice personified is probably an understatement. Still, with those successful throwbacks, many still remain, so here are ten classic Mario enemies who need to be in the next Mario games.

The quintessal 'underused' Mario enemy. Really, for exactly one game in Mario history, they basically become the new Hammer Bros, with all kinds of weird variants. Many just charged, like the name suggests, but you had it all... Pitching Chucks threw baseballs, Digging Chucks dug up rocks, kicking Chucks kicked American footballs and Splitting Chucks split into three clones of themselves. Heck, you even had whistling versions who woke up hungry fish and send down caped Super Koopas to attack!

Then, they somehow just vanished never to return. Okay, that's a lie, they appeared in the e-Reader levels of Super Mario Advance 4... yeah, you never probably played those either, because the massive financial disaster of the e-Reader meant it never got released outside of Japan and the USA.

Huh? Would it be so hard just to have them in a new Mario game? They'd have gone perfect in New Super Mario Bros Wii.

Above: Knowing Nintendo, we wouldn't even see them in a freaking Mario Madden game. If they were dumb enough to make one, we'd probably get fifteen colours of Toad, Goomba, Magikoopa and Birdo rather than the one species which are meant for the game... oh wait, Mario Baseball had two games and they never appeared there either.

Because nothing says 'awesome' for a Mario enemy than if even the sun wants to kill Mario and co. Appearing in a single desert level in Super Mario Bros 3, it then appeared in Mario Kart DS, much much later. Heck, it was even in the intro of the cartoon series, where apparently it was dumb enough not to recognise Mario when he had a Racoon Leaf...

Still, it's a classic enemy, and one many, many players of the old Mario games remember. Indeed, it would have been good as an outer space enemy in the Mario Galaxy games, or as a brought back classic foe in world 2 of New Super Mario Bros Wii. Let's hope Nintendo decides to bring it back soon. 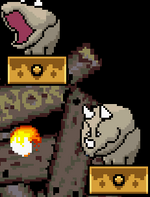 Yeah, sometimes you just can't win, can you? Still, Reznor, the four spinning dinosaur things on that wheel were a pretty cool Super Mario World boss, despite being even more of a confusing dinosaur/dragon mix than even Yoshi. A 3D appearance would probably be asking way too much of any company, let alone Nintendo (yeah, you work these guys into a story, it's difficult. Although considering Glamdozer and Squizzard are apparently the competition, maybe easier than thought for Nintendo)

But a 2D appearance in a new, mainstream Mario platformer wouldn't go amiss, would it?

The other boss who lost out due to that pintsized brat they call 'Koopa Jr', he's kinda like the half mutant cousin of the Koopalings. With no explanation given for his even existance, he was still a pretty fun boss to fight, and despite coming about ten years earlier, he still had more variety in attack than Bowser Jr ever did. 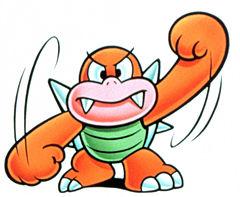 Above: Is he related to Bowser? Roll the press!

A weird case, because it seems every other trap in the Mario series has returned, bar this. Laser statues from Super Mario Bros 3 returned. Firebars returned. Ball n Chain's returned and giant metal spike pillars of doom have been in two recent games. Heck, even the Jet/Rocket Engines from the airships have been making a comeback, in at least three recent Mario games.

But not the Roto Discs. The Super Mario Bros 3 equivalent trap, remains unused. Huh? Every trap in the series bar this and the chainsaws has been in a recent Mario game, why not this? I know they look like rainbow coloured waffles of doom, but does someone at Nintendo hate them that much?

And considering they appeared in Super Mario Bros 3, nearly everyone's favourite Mario game bar the first, you would have thought they'd be first on the 'bring back in New Super Mario Bros' list. Maybe we'll even see 3D versions one day, to annoy younger players like they annoyed the Super Mario Bros 3 veterans! 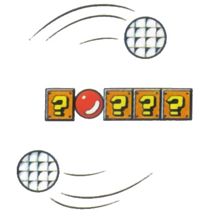 Note: How do these things work anyway? They're not even attached to the metal ball they rotate round. Magic, or complex antigravity system?

Most annoying enemy in Mario history award winner infinite years in a row, to say he never appeared again might be too quick, since he appeared in Super Princess Peach as a likely rare enemy, and was actually intended to be in the beta of New Super Mario Bros Wii, as the existance of files called 'GHOST JUDGEM' may attest to.

Still, being the name that has annoyed many a Mario player for oh so many years:

And two Fishin' Boos are betterworse than one!

These enemies would honestly be great in a 3D game. Mean, but you've got to admit it would have made the Perfect Run even more hellish to have a Fishin' Boo trying to kill you the whole way through it.

Obscure enemy time! A Stretch is that... ghost/Boo type thing that comes up out of a white platform. I never really did know where the design came from, they look like something out of a weird horror movie, but ***, these things were underused. Barely even appearing in the original Super Mario Bros 3, they've appeared... pretty much nowhere since.

Above: Winner of the weird Mario enemy award for many years running.

Just like the Fishin' Boo, they were intended to be in the beta version of New Super Mario Bros Wii. *** Nintendo, you really cut out all the good stuff!

Ghost Yoshis? Possibly, and like so many other ghost versions of Mario enemies, like the ever present Taboomba/Goomba Ghost, they made one fleeting Super Mario World appearance and then vanished off the face off the planet.

Which is rather weird all things considered, since those Haunty Halls/Boo Moon enemies that kept crossing Mario's path seemed very much like a badly done rip off of the classic Eerie enemy. I mean, look at it, seems like a perfect family resemblance!

Maybe in the next Luigi's Mansion?

We've got Whomps, Thwomps, Thwacks, Rhomps and Flimps in the recent Mario games, but sadly, we've yet to see the return of the first Thwomp variant in Mario history, the Thwimp...

Okay, that's a lie, there were diagonal and sideways Thwomps in Super Mario Bros 3, and we never got those back either, but hey, that's beside the point. Such an easy enemy to bring back, and one that would fit in any castle or fortress, yet it's never appeared after Super Mario World.

You would have thought New Super Mario Bros Wii would have used it somewhere, right?

Above: Ahh, a Mini Thwomp! 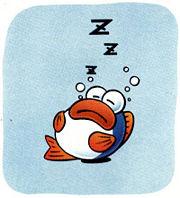 Also known as the last Super Mario World water enemy to make a reappearance. Cheep Cheeps are common, Blurps exist, Urchins have made a major comeback and even Torpedo Teds seem to be getting a bit more common.

But our favourite sleepy fish is another story. Only in one game, he was practically a really novel replacement for the classic Blooper of Mario yore. Yet, his replacement returned, this species didn't. And come on, sleepy fish are so somewhat cute, right?

So, ten classic enemies I'd love Nintendo to bring back in another Mario game. Do you think the list could be improved, or I've missed any from the mainstream games? I personally love how the recent games have brought back all my favourite Mario enemies, just it'd be so much better if Nintendo brought back many more.

There are a lot of great Mario baddies who could do with a revival, aren't there?