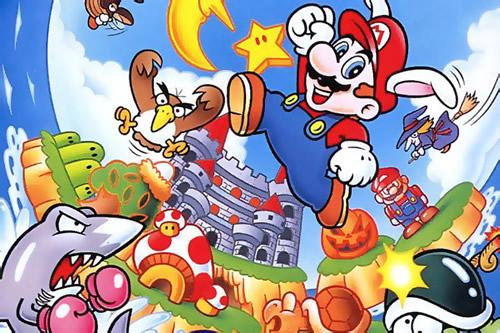 A Guide by Benni Castellanos Ruiz. Following up the huge success of Super Mario Land, Nintendo came up with Super Mario Land 2: Six Golden Coins which follows up the story from Super Mario Land. Wario, who now is Marios’ nemesis on this game, stole Mario's castle and locked it with the help of the six golden coins, now Mario has to travel through Mario Land and all its 6 zones to gather the coins and reclaim back his castle.

Unlike its predecessor, Super Mario Land 2 has solid controls and big graphics compared to those used on super Mario bros. 3, Mario looks just like he does on Mario 3 in a monochrome style. The controls are the same as most Mario games, and it presents different transformations making it that, a portable Mario Bros. 3.

Move with the D Pad, you can duck and press up and down to look up or down on the screen.

Press A to jump, you wont stop jumping while you are Bunny Mario, it also helps you swim under water or while you are in swimmable surfaces. Mind that some levels have altered or different gravity. We’ll discuss them later.

Press B to shoot fireballs while you are fire Mario, they defeat enemies and may destroy some bricks, also, you may use B to grab koopa shells that will appear on top of your head, you may let go so they are shot forward.

Press Down while jumping to perform a spin jump. You may destroy some bricks with this move.

Each stage features a bell which acts like a checkpoint. If you lose a life on a level you will continue from the mid point as normal Mario.

There is no score but your coins are counted, you may go to the middle of the map to get more lives, up to 99 depending on how much you pay. There is also a monster counter, if you beat 100 enemies, you will get a Starman, falling from the sky.

If you are on a level you already passed through, you may press start, then select to quit the level.

There are two kind of minigames on this game, one is like a ufo-catcher which lets you grab lives. The other minigame features a set of fuses for you to jump up to so a path is chosen. You may get lives or power ups on both of these minigames.

There is an entry level which features most of the items you can get on the rest of the game. This first level is a tutorial level so you can get around the controls.
The game has 6 zones and the castle, you can play them in any order you want. I will give you the suggested order by the game manual. Each level has two exists.

Tree Zone:
This zone features leaves and long passages that are nice to start. Try to get a grip at how levels work and try to exit through the upmost exit to get bonus lives and extra items. The boss, Kurosu is rather easy to defeat. There is a secret exit on stage two.

Space Zone:
Jump high from the special stage and get to Space Zone, altered gravity and harsh enemies await on this space zone. Remember that you can jump higher so use that to your advantage. The boss on this zone is familiar, is no other than Tatanga, the last boss of Super Mario Land.

Macro Zone:
Everthing is huge now! Get to the macro zone and become small, everything is huge now so beware. The secret stage can be found on stage one. The boss of this level is Rikki, the rat.

Pumpkin Zone:
It surely feels like Halloween now, the pumpkin zone features Boos and make of the iconical stuff from other Mario games. The boss here is Sabasa, the witch. There are bonus levels on stage two and three.

Mario Zone:
Yes, Mario land features a huge toy factory-like level called Mario Zone, inside a huge Mario. This has no bonus levels but it features 4 levels of extreme fun and hard puzzles. The bosses of the zone are the Three Little Pigheads.

Turtle Zone:
The underwater group of levels are inside of a turtle under the sea. The submarine level features this worlds secret stage which has Wario Land 2 spelled in coins. The boss is the mighty Pako, a huge octopus.

Mario’s Castle:
Once you have the six golden coins you may go into Mario’s Castle which features a lot of traps setup by Wario and the final boss is Wario who has three stages and is quite easy to beat. After that, enjoy the ending.