"The Brawl to End Them All"

It feels like an eternity of waiting, countless "official" character rosters, numerous weekday updates on the Smash Bros. Dojo website, and three kick-to-the-stomach delays, but finally Super Smash Bros. Brawl has arrived to North American shores. All your favourite Nintendo all-stars enter the fray for one epic brawl to end them all, but has the wait been worth it? Is it at all possible for this game to live up to its immense hype?

Fighting games often sport many modes of play, and while some spread themselves too thin (I'm looking at you, Soul Calibur III) Super Smash Bros. Brawl does a commendable job of offering quality in each of its myriad modes. While Smash is meant to be multiplayer mayhem first and foremost, lone players will still have plenty to do. Mainstays return to the Smash series and in top form. Classic mode has you playing through 12 rounds. Each round is either a one-on-one affair with varying elements such a gigantic or metallic opponent or team-based. Event mode makes another appearance offering thirty plus themed challenges such as defeating the cast of the original Smash Bros. in one go or taking on two kings, Bowser and King Dedede, as Mario. Rounding out the homecoming of modes is Stadium where Multi-man Brawl calls its kingdom as well as Home-Run Contest where you try to hit a bag of sand as far as possible. Finally, Break the Targets is here though there's unfortunately only five different levels. Characters no longer have their own levels to smash targets through.

What is new and may raise some eyebrows is the Subspace Emissary making up the adventure mode of Brawl for either one or two players. The world of Nintendo's mascots is under attack by dark fiends. To combat this, players go through mascot-themed 2-D levels, taking out baddies along the way with boss battles sprinkled here and there throughout the entire mode filled with gorgeous and oftentimes humorous cut scenes. It's a good concept which borrows from director Masahiro Sakurai's past Kirby titles, but overall the Subspace Emissary is a pretty clunky, humdrum experience. The controls serve well for fighting in the main modes, but platforming with them is a bit floaty and imprecise for my tastes. The mode clocks in at just over six hours, but honestly it feels like it should have been shorter. I had to press myself just to complete it as it can get quite repetitive. 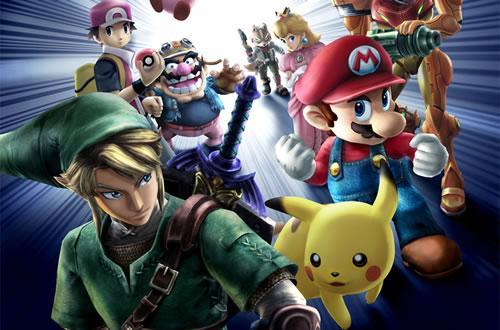 And even if you're tired of playing the single-player modes and lack any buddies nearby to brawl, there's online to play. You get two options of play: With Anyone searches randomly for players from around your area, or you have With Friends which draws on those damned Nintendo friend codes to play with your friends. Lamentably, With Anyone is bare-bones. There's no communication or options to select from whatsoever so you might as well be playing against the AI. Just pick a character, pummel a punching bag in the waiting room standing by for your opponents, and bash the hell out of each other for two minutes. With Friends is cheerfully better as you can select what items will be in play, the time limit, damage ratio, and other quirks. While communication is a non-issue, you can create phrases that can pop up in battle with the push of a button to taunt opponents or express your need to say "lol wut" from across the globe. Online is pretty much lag-free with friends, but with Anyone and with folks further away from you, latency is a huge problem at the time of this review (a month after SSBB's release).

While Wi-Fi is a welcomed addition to the Smash Bros. series, local multiplayer is still far more gratifying, and all of the options are available to you to choose from. You can set up match types, create tournaments, and select from special rules like all metal, giant, small, or flaming characters (no not that type of flaming character!). Rotation grants the chance for everyone in the room to play.

The cast of characters and stages in Brawl is astounding. There's enough heroes, villains, and beauties to choose from. Newcomers like Wario and Diddy Kong bring with them their own charm and playing styles while old favourites like Mario and Link are changed just enough to feel fresh. Clones were a big problem with Melee, and thankfully many of the clones returning to Brawl have been changed slightly to seem unique. The stages are some of the best to have ever hit a Smash Bros. game. One will have you traveling around the sunny sites of Delfino Plaza which made this reviewer want to pop in Super Mario Sunshine all over again. Then another takes you to Smashville where Animal Crossing onlookers like Brewster and Gracie spectate your battles. Of course, if you're feeling nostalgic or longing for some old favourites, there's ten stages from Melee which mark their return. In total, there's 41 incredible stages to play through, and honestly I only detest two of those 41.

Brawl will last you a long time as there's a lot of items to collect as well as unlock. Get ready to spend a lot of hours inside the Vault menu. Trophies return from Melee which are quite entertaining for the Nintendo aficionado or random collection junkie to gather. There's over 500 individual trophies, and each trophy is based off a character or item from Nintendo lore. Want to read up about Star Fox's General Pepper? Just select the trophy to read up as well as see his first and last appearance in a game. Some items like stickers have a more beneficial purpose as they can actually boost the stats of your characters in the Subspace Emissary mode. Then there's coins-- the currency of Brawl. Use these in the addicting Coin Launcher minigame to score new trophies and stickers. However, certain trophies, stickers, and other unlockables can't be received so easily. This is where the Challenges menu comes in. Think Xbox 360 achievements that actually give you something for completing a certain task in-game other than a larger e-penor. There's over 100 of these challenges to complete giving players new trophies, stickers, demos, and music, and while some are easy to nail such as beating Classic mode as a given character, some are quite time-consuming. There's nothing more satisfying than seeing an almost complete board of all your completed challenges and prizes.

There's even more inside the Vault. You can arrange trophies to your liking, peruse your sticker collection, flip through your photo album of all taken screenshots in-game (a feature that I can't get enough of), or if you're feeling a little too big for your britches, create your own stages. You can create some pretty cool creations to brawl others on, but it's also very limiting. There's only three backgrounds to choose from, some pieces have too big restriction areas to do anything with, and you can only send levels to other players but you can't play them online with one another. Those gripes aside, this is another mode that I can't seem to get enough of.

So if you haven't guessed it by now, Super Smash Bros. Brawl is brimming with content. I couldn't stop playing for weeks trying to unlock that next trophy, character, song, or stage. But how's the gameplay? Pretty much unchanged formulaic-wise. The basics of hitting your opponent out of or off of a stage still apply. The more you damage your opponent, the further they'll fly when you hit them with a smash. Normal attacks, tilts, smash attacks, and special attacks have all returned with a bang. The biggest change I would surmise is how air dodges are performed. No longer can you dodge in a direction meaning those hoping for the wavedashing meta-game are out of luck. No worries though, you can still school newbies with chain-grabs and spikes. Now while there are four control types to choose from, you'll most likely want to grab your old Gamecube or Wavebird controller to brawl. The button configurations are completely customizable giving you the ability to select a control style that fits you and your playing style. 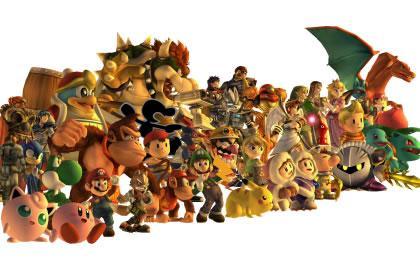 Great games are easy to learn and hard to master. There's a thick layer of depth buried under the casual-friendly exterior. Super Smash Bros. Brawl succeeds in varying the gameplay while keeping the core foundation intact. New strategies arise from the Final Smashes and change the tactics of battle recognizably.

Items are the meat of the Smash Bros. sandwich (God, did I just write that?). While some players are set in their ways about leaving them off (no items, no lip, no sex ever, Fox only, Final Destination), most will opt to leave them on. It's what makes Smash Bros different from any other fighter sans the Nintendo facade. The newest and most prevalent item is the Smash Ball. When it appears it's a mad dash to bust it open, and when a character does they can unleash upon their unsuspecting foes their Final Smash attack. For example, Kirby's FS sucks his opponents into a pot of stew, dealing damage and possibly propelling them off the stage. On the other hand, Fox calls in his landmaster to blast foes to submission. If Final Smashes aren't your thing, try out the Assist Trophy. Think Poke Ball but instead of summoning a Pokemon, you're calling upon a character from Nintendo past like Samurai Goroh who slices and dices anyone who gets in his way or Little Mac who pummels any nearby opponent.

Brawl sits pretty as one of the Wii's most graphically impressive games. The amount of detail everywhere is just staggering, and it all runs in 480p and 60 fps-- never showing a slight thought of slowing down. What's even more staggering is the amount of music in Brawl-- over 250 individual tracks. Original songs used in games like Star Fox Assault and F-Zero X, but also remixed versions of old favorites from the likes of Yasunori Mitsuda, Motoi Sakuraba, Yoko Shimomura, and Koji Kondo-- themes you've probably forgotten but when it's played you'll go, "Man, I totally forgot about that song!". Using the My Music feature you can choose the probability of what songs will play in a given stage.

Ever wanted to see who was the strongest-- Mario vs. Sonic, Snake vs. Samus, Link vs. Zelda? Now you can. As a single-player experience you won't get as many miles out of the multiplayer bliss that is Super Smash Bros. Brawl. It nears perfect, and while extras like the Subspace Emissary drag it down a bit, it's still one of the best games Nintendo has created in a long time. There's an exuberant amount of content that you can just tell Sakurai and his cohorts poured their hearts into this title. I have not

been this addicted to a video game for a long time. It's a feeling that I've missed as a gamer, but Brawl seems to have rekindled that raw gaming emotion in me. Perhaps it will do the same for you.