Prince Lemmy Koopa also known as Hip Koopa in the cartoons is one of Bowser’s eight kids, the second eldest. Named after Lemmy Kilmister from the band Motórhead, Lemmy is usually noticeable through his multicoloured mohawk and crossed eyes. Lemmy's main color attributes is orange and yellow, though his color scheme consists of many bright colors. He is good in balancing atop a ball as his special abilities deals with bouncy balls.Lemmy is portrayed wearing very few items of clothing, he wears the same metal spiked cuffs the other koopalings wear, but he also has his own shell design, which is orange in color, lined with a white encasing and short spikes which are circled with light green rings. Lemmys facial attributes are very similar to that of a Mecha-Koopa.

In Super Mario Bros. 3, Lemmy debuted with the Koopalings where they helped Bowser conquer the lands of the Mushroom World. Lemmy managed to obtain Ice Land and stole the Magic Scepter of the Ice King. He then turned the King into a Monty Mole in later versions. His second appearance was in Super Mario World with the other kids where they attack Donsaur Land. He guarded a kidnapped Yoshi trapped in an egg in the Vanilla Dome where he lives.


Despite being the second oldest of the Koopalings, Lemmy’s characteristics is similar to a child, innocent and extremely immature—as he prefers to clown around instead of aiding his dad King Koopa’s conquest schemes. Additionally, he has an extreme pull towards the cold and ice, as to why he’s the ruler of Ice Land.

The writers of the Adventures of Super Mario Bros. 3 wrote about Lemmy Koopa's personality and mannerisms as below:-

While the rest of the Koopalings are in their teens, Hip and Hop are bratty six-year-olds. These twins don't go anywhere without one another, and are always finishing each other's sentences. Silly and dumb, goofy and bumbling, they are always lost, and have probably forgotten where they were going anyway. They flunked Koopergarten. They wouldn't be a threat to the Mario's and the princess, if it weren't for the fact that they have the most powerful Magic Wands, and are easily manipulated by Bully and their other siblings.

Some quotes from Lemmy Koopa

“How far can Mario go? I hope he doesn't make it this far. Dad has many complicatedtricks waiting for him in the Dark Land. I've even heard about some new weapon that dad's been making." - The Super Mario Bros. 3 manual (page 34)

Again like all of the Koopa Kids Lemmy doesn’t have many friends and just stays within his own family and even within their family unit there is a lot of sibling rivalry.

After his debut Lemmy has appeared several of times over the years, including in the more modern Mario-adventure titles such as New Super Mario Bros. Wii. He was even featured in the Super Mario cartoon series as Hip Koopa, portraying as a 6-year old, and being the twin of Hop Koopa (Iggy) whom he liked playing tricks on. Information about Lemmy’s roles in the Mario-adventure titles were listed below. 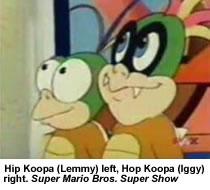 conquered Ice Land, stole the Magic Scepter from its leader and turned the King into a seal, in a later version of Super Mario Bros. 3 the King was turned into a Monty Mole.

Mario fought his way through the levels of Ice Land and up onto Lemmy's Airship where he eventually fought against Lemmy in his cabin. During the fight Lemmy would run around the room whilst balancing on a rubber ball. Jumping on Lemmys head three times would defeat him enabling Mario to return the Magic Scepter to its former owner the ruler of Ice Land, transforming him back to his

Super Mario World - A short time after the events of Super Mario Bros. 3 the next time we would see Lemmy Koopa was in Super Mario World when he along with Bowser and his siblings launched their attack on Dinosaur land. Each Koopa kid took over the main castle in a land, Lemmy took the castle in Vanilla Dome where he held prisoner one of seven captured Yoshi's.

Once Mario reached Lemmys castle chamber he is confronted by a network of pipes - Lemmys tactics in this chamber were to pop up out of random pipes, sideways, upside down etc whilst having two dummys of himself doing the same thing. There is also a Podoboo bouncing about for Mario to avoid during the battle. Mario jumped on Lemmy (the real Lemmy) three times to eventually knock him out
of his pipe and into the Lava below. 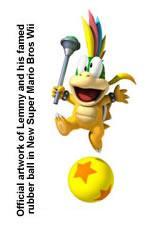 New Super Mario Bros. Wii - Lemmy and the Koopalings are back in this title as bosses. Lemmys appearance in this title had changed a little his shell became orange and he had a ponytail instead of a mohawk, he has his rubber ball from Super Mario Bros. 3 with him which he balances on throughout his fight with Mario at the end of World 3. Lemmy has the same chamber setup in both his castle and his tower comprising; a platform of ice making it difficult for Mario to battle him
and pits either end placed strategically for Mario to fall into.

Mario's approach caught Lemmy by surprise but Lemmy backflipped onto his ball and got ready to fight him all the same. In the tower confrontation Lemmy makes use of his scepter to conjure balls to bounce at the players, these balls don't do damage but that isn't there intention - they are intended to knock a player off the ledge into the pit. Eventually despite his array of tricks and moves Lemmy was defeated but did survive the battle as we see him with his siblings pulling Bowser back up at the end of the game, shortly before Bowsers castle came crashing down on all of them.

Additional to all of Lemmys roles in the main adventure titles he has also got references or minor roles in several other titles such as:-

Mario is Missing - Although Lemmy is not seen in the title it is said in the PC version of this game that the reason Lemmy did not join the plan to melt Antartica and flood the world he did come to the world, but decided to play in the ice and snow that he is so fond of rather than aiding Bowser in his evil quest. 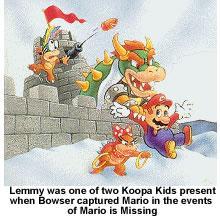 Yoshi's Safari - In this title Lemmy joined the attack on Jewelry land with Bowser and his siblings, he was given responsibility for Grass Land where he guarded a magic gem. For his battle against Mario, Luigi and the Super Scope Lemmy was equipped with a big Koopa-clown resembling mech which featured five cannons. On taking more and more damage from the scope Lemmys mech would eventually explode throwing him the Koopaling into the distance.

Hotel Mario - Lemmy like the other Koopa Kids has taken over a hotel in the Mushroom Kingdom. The hotel Lemmy was in charge of was called "Lemmy's High-ate Regency Hotel" which is in the sky it is here that Peach ends up, under the guard of Lemmy after Mario and Luigi defeat Larry at his hotel and it explodes. Lemmy would attack Mario by throwing paper planes at him whilst flying between floors of his hotel using a heli-pack. The Mario Bros eventually defeated Lemmy by closing all the doors in the hotel and activating a giant fan to blow away Lemmy and his Hotel into oblivion!