Super Mario Games on the Nintendo 64 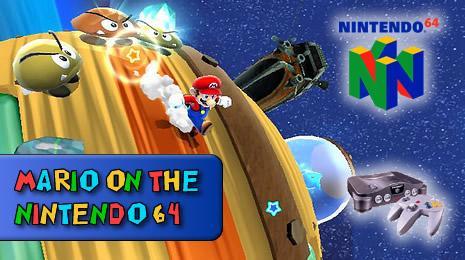 Mario Games on the Nintendo 64

Below are the Mario games on the Nintendo 64 that we cover. Visit a games page by clicking its box image below.

The Nintendo 64 was the third home console system to be released by the Nintendo Company, and it represented a video game revolution. While the name may not have been the most original, named for its sixty-four bit processing unit, the Nintendo 64 let its games and graphics handle any criticism. The N64, as it became known, continued to use cartridges to hold its games, allowing for the system and its games to be known for their durability. The Nt64 was released in 1996 in some early markets, and in 1997 to the rest of the world.

The system launched with the most famous name in the Nintendo world: Mario. The Mario games on the Nintendo 64 would come to define the system’s capabilities in terms of graphics, music, and three dimensional rendering. Other things that made the system memorable were the fact that the N64 and controllers were released in a wide variety of colors and in the style of a particular videogame. The Mario games on the Nintendo 64 inspired a customized system for both the release of “Mario Party” as well as “Mario Kart 64”

However, there were a few drawbacks of the system. For example, the Rom cartridges could only render a certain amount of textures which limited the overall graphics capabilities of the system. Though it had superiority in its 64 bits, the N64 could not match the next generation of systems in terms of their graphical depth and texture packs. Another one of the main drawbacks of the Nintendo 64 that would haunt the Nintendo Company was the lack of games produced for the system. While the Playstation had over one thousand titles, the N64 was home to fewer than four hundred, even fewer titles than the two previous consoles.

Yet, what the N64 lacked in game diversity, it made up with quality. The Mario games on the Nintendo 64 helped to get the system off to a fiery start, and propelled it through the system’s first years with titles like “Paper Mario” and the famed spin-off “Super Smash Bros.” in which Nintendo characters from different worlds came together to battle for the first time. With a variety of other memorable games such as “Goldeneye 007” and “The Legend of Zelda: Ocarina of Time”, the N64 remained popular long after its discontinuation in 2003 to make way for the Nintendo Gamcube. The N64 was a true test for the Nintendo Company as they proved that they could adapt to the changes of the videogame industry and still come out on top in many areas.