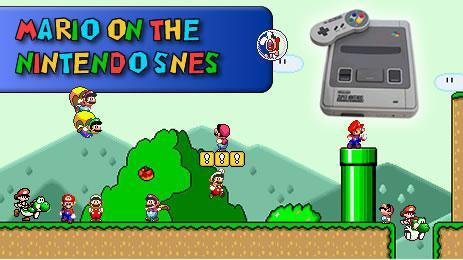 Below are the Mario games on the Nintendo SNES that we cover at the site. Visit a games page clicking its box image below.

The Super Nintendo Entertainment System, called the SNES by many, is a 16-bit successor to the wildly popular Nintendo Entertainment System. Originally released in 1990, the system was released around the world much quicker than the original because of the ground that had been paved by the prior console. Although it was released under several different names around the world, the simple fact is that this system was revolutionary for its time, and allowed Nintendo to completely dominate the market for years.

The main competition that was faced by the SNES was from the Sega Corporation. They engaged in an all-out video game war to determine who could produce the best graphics and games for their customers. The first true battle of its type, the debate over the quality of the graphics offered by these systems is still brought up today. However, when it comes to games, the SNES was able to produce incredible results. The Mario games on the Super Nintendo could have cornered the market on their own as they released title after title that offered unique gameplay and story elements. “Super Mario World” hit the market so hard that it Sega had to invent a sidescrolling platform game, “Sonic the Hedgehog”, just to stand a chance.

The Mario games on the Super Nintendo helped to define the system and ensure that it would remain one of top consoles to have ever been made. It was able to command a respectable presence in the gaming community far into the next generation of consoles as many people remembered its simplicity and all of the wonderful games that they had enjoyed over the years. Although the systems were discontinued years ago, there are still many retro game enthusiasts and gamers that play the SNES on the physical system

as well as through ROM files, reliving some of the earliest and best years of gaming.