“Mario Picross” on the Gameboy is a puzzle game that was released by Nintendo in 1995. It was developed by the Jupiter Company and was the first picross game to be featured by Nintendo.

Picross is an old Japanese pastime which is comprised of a mix of maths and crosswords. Sound difficult? Don't worry, you're not on your own Mario who also happens to be a qualified archaeologist is here to help. On each level you get 30 minutes to scrape off the squares in the correct order, if you are successful you will reveal the hidden picture if your time runs out before the picture is revealed then its game over!

There are two courses of puzzles in Mario's Picross, the course you start on is called KINOKO (Mushroom in Japanese) and only after beating this course will you unlock the STAR course.

After completing both courses in full, you will gain an option on the start screen called Time Trial. In time trial mode there is no 'with hint' option, there is no time limit, however if you make mistakes the computer will not notify you, you'll just lose points at the end. The game has three save slots and saves are done automatically as you progress.

The goal of each puzzle that is presented throughout the game is to scrape specific squares from a tile board in order to reveal a picture. At the start of each “Mario Picross” puzzle the game grid is completely blank. On the horizontal and vertical rows are various numbers that tell you exactly how many tiles must be cleared off in each particular line. With Mario’s help, you can clear the tiles in order to reveal pictures of certain animals and even scenes and characters from the Mario franchise.

The numbers on the rows show you how many tiles must be scraped off in order to reveal the picture. For example, if the horizontal line says “3”, then you must scrape off three consecutive tiles at some point in the line. If the line has multiple numbers such as 2 3 4, then your must scrape off two consecutive, then three, then four tiles to reveal the entire line. The gap in between the consecutive numbers must have at least a single block of space, but it can be longer depending on the puzzle. If you are sure that an area in the game does not need to be scraped off to complete the image, then you simply mark it with an “X” and move on.

"Mario Picross” on the Gameboy features 256 different puzzles in all. The easy picross puzzles are 5x5 or 10x10, but all of the others are 15x15. Each different game mode has 64 puzzles available.

At the beginning of Easy Picross and Picross game modes the player can get a hint which allows you to have the correct row and column for the puzzle already revealed. While many people use the puzzles to make the game easier, it is still possible to not use them and complete the entire game if you like a challenge. The game starts with a 30 minute time limit available for each puzzle, but if you manage to scrape off a tile that should not be scraped, then the game clock is reduced. The rate of time decreases goes as follow: 2 minutes for the first, 4 minutes for the second, and all others 8 minutes. The game records the first time as well as the best time for each puzzle, and places an “H” next to the game to denote that you used a hint.

The time trial rules are different than the other game modes for “Mario Picross” on the Gameboy. You do not get any hints and you do not have a time limit. It is all up to you and Mario. You cannot select a specific puzzle, and the game does not tell you if you make any mistakes. It is up to you to do your best without any help in the least amount of time possible giving a really nice boost to replayability for even the most powerful Picross veteran.

One of the most enjoyable parts about “Mario Picross” on the Gameboy is that you get to see a wide variety of faces from the Mario lineup. 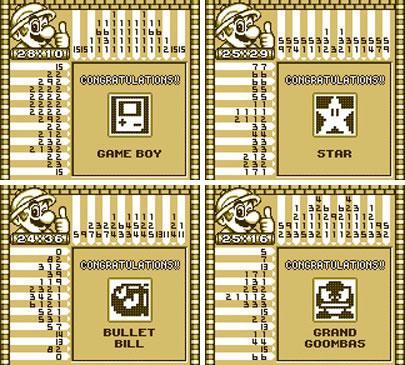 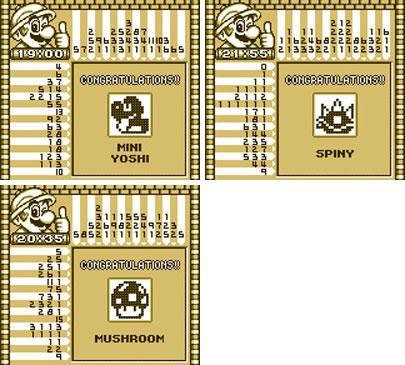 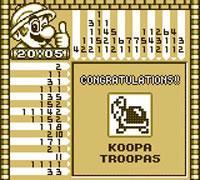 A video showing the game play of Mario's Picross on the Game Boy by Benni Castellanos.

Mario's Picross can be bought at Club Nintendo for only 100 coins for the Nintendo 3DS virtual console. Alternatively it can be bought on the Nintendo eShop for $3.99 USD or the equivalent in your local currency. Below is the official description of the game from Nintendo.

Help Mario™ reveal mysterious hidden pictures by testing your wit and speed in over 250 brain-bending puzzles.

The game was well-received and experienced incredible support in Japan where it was seen as a welcome portable puzzle game that integrated fun pictures. However, things did not go so well in America and Europe for “Mario Picross” on the Gameboy. The unfamiliar game and the fact that it was advertised poorly did nothing to help the fact that it had stiff competition from other consoles. However, many people bought the re-release of the game and noted that it had certain addictive qualities.