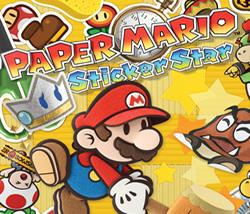 "I am happy to be stuck with you."

There was much trepidation from fans when the project formerly known as Super Mario RPG 2 was turned into Paper Mario. How would the new paper aesthetic affect the game? How would the elimination of having three party members in battle change the gameplay? It turned out that many of these hesitant fans entered Paper Mario, and it wound up being a game that satisfied them more than the Mario's first RPG outing, Super Mario RPG: Legend of the Seven Stars. Nintendo has once again attempted to change the formula for the better by implementing a sticker-based ability system and eliminating experience points and levels from their newest installment in the Paper Mario series, Paper Mario: Sticker Star for the Nintendo 3DS. Is this game one you'll become attached to, or is it stuck in mediocrity?

Once every century the fabled Sticker Star arrives in the Mushroom Kingdom. To celebrate, the denizens commemorate the occasion with the Sticker Fest. All goes well with the festivities at first until Bowser rears his ugly head into things. He touches the Sticker Star, resulting in him generating a plethora of power, once again capturing Princess Peach, and sending the six Royal Stickers flying across the land. Mario must join up with a helpful crown-shaped sticker named Kersti to venture into six lands to retrieve the Royal Stickers to right all of Bowser's wrongdoings. Players ought to get accustomed to Kersti as that is Mario's only fellow traveler in the game, unlike past Paper Mario entries. While the many different personalities brought by the various partners from Paper Mario and The Thousand-Year Door are missed, Kersti serves as a suitable companion. Make no mistake that the typical high-tier humor of the Mario RPGs is still present and accounted for.

Rather than visit lands that are interconnected in one way or another, Paper Mario: Sticker Star's formula is much like traditional 2D Mario games. There are levels to explore such as 1-1, 1-2, 1-3, and so on, each with their own goals (some with hidden exits to secret levels). After Mario and Kersti exit from the central town of the game, Decalburg, you can choose to visit one of four locales, though it is recommended that you go in numerical order as enemies in world 2 and 3 have much higher attack strength and health. As Mario gains more powerful stickers and nabs some special items that increases his HP, he can tackle the mightier foes in his path.

Stickers are paramount for accessing new areas in the game's various levels and for battle. They are placed all over levels, ready to be peeled from walls. Apart from stickers, Mario will come across rare objects like soda cans, vacuums, bowling balls, baseball bats, batteries, among others that the game simply calls "Things." Along the way, Mario will uncover obstacles in his way or puzzles that must be solved. This is where Things come in. A place on the western side of Decalburg allows Mario to take collected Things and throw them against a wall to transform them into stickers. Then Mario can use the paperization move (done with the Y button) to paste a Thing sticker into a square depicted by a dotted line. For instance, the oasis level in the desert world has a fierce twister that is causing all sorts of problems. If you paste the vacuum Thing sticker at the appropriate point, it will suck up the twister and allow Mario safe passage to where he previously couldn't reach.

A problem with this process, however, is just how obtuse some of these puzzles can be. Knowing which Thing sticker to use or even where you can even find the required Thing is nebulous at best. A player can tear their hair out trying to double back through levels as they search every nook and cranny for that missing Thing. When you get a Thing that you think may work, it might not even solve the puzzle. This can be immensely frustrating.

Then there are the battles, more prominently the midboss and regular boss battles. If you don't possess the right Thing sticker for the battle, you are pretty much up a creek without a paddle. Each boss has at least one Thing sticker that they are severely weak to, which will make a seemingly impossibly difficult battle much less taxing. Not only do you need the right sticker, but you also need to use it at the right time. This can be hard to determine. There is a lot of trial and error involved in Sticker Star, and some of it is not welcomed. There are not many feelings while playing the game worse than not having the right set of stickers. Talk about a sticky situation! We complain about Nintendo doing a lot of hand-holding in games such as The Legend of Zelda: Skyward Sword. Well, this is a case of not holding the player's hand enough. There has to be some kind of middle ground to be reached, and Nintendo has not been able to reach it recently.

Battles themselves do not reward experience like they have in previous Paper Mario games. You might think that there is no good reason to do battle then. Well, perish that folly of a thought right now. Battles give Mario much needed coins, which can be used to purchase stronger stickers at shops for his adhesive arsenal. Once a sticker has been used, it is removed from Mario's inventory. Depending on the sticker's size, it takes up a certain amount of space in Mario's sticker book. As the paperized plumber beats bosses and retrieves Royal Stickers, pages get added to his book, so he can hold more stickers.

If you are a veteran of Mario RPGs, then you know what to expect. Paper Mario: Sticker Star has the same turn-based battles where timing is crucial for swift success. For example, tapping the action button right before Mario lands a jump will deal more damage, and will allow him to jump again. Conversely, pressing the action button as an enemy's attack connects (or just before) will have Mario hold up his defenses, taking less damage. It is a proactive battle system that involves the player in each battle instead of being "some passive hit the attack button ten times and plod through the fight affair."

In battles Mario can spend coins to activate the Battle Spinner. This is like a slot machine where you try to match all three slots with the same picture. Depending on how many slots you match, Mario gets to use that many stickers that turn (e.g. you match two slots, you get two turns in a row), and depending on what pictures you match, a different effect happens. Such an example is matching three coin pictures, causing coins to rain down from the sky, making Mario's wallet a bit fatter. Being allowed to use more stickers can make arduous encounters all of the more manageable.

There's a myriad of sticker types available in Sticker Star-- nearly 100 battle stickers like jumps, hammer attacks, shell shots, flower attacks, mushrooms, and much more. As stated before, Thing stickers can be used in battle with numerous different effects. The boombox grants Mario an attack boost for a handful of turns while the scissors cut up the battlefield, inflicting heavy damage on enemies. 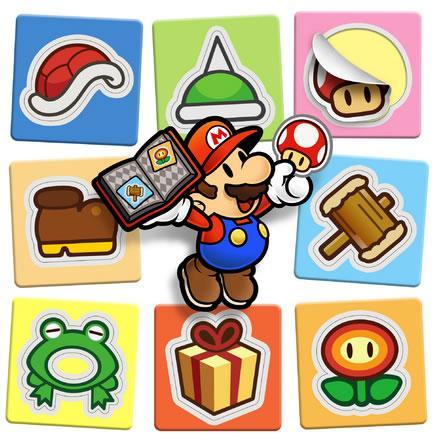 To say there is plenty to accomplish in Paper Mario: Sticker Star would be underestimating the game. My save data took me around twenty hours to practically complete. Side quests include saving all of the bullied Toads, locating Luigi's five hiding spots, finding all HP Up Hearts, collecting every sticker in the game and donating it to the museum, and meeting the requirements of eight flags (think of them as achievements for Sticker Star). There is no shortage of stuff to do long after Bowser has been beaten.

Paper Mario: Sticker Star nails the presentation superbly. This goes from its paper aesthetic to its sensational sound. The colors of the game are crisp and colorful, levels look like interactive and engaging panoramas, and the stereoscopic 3D effect-- while not required-- is some of the best the Nintendo 3DS has seen yet. A great example of this is when Mario uses the Slaphammer sticker. He slaps a foe across the screen and sends it flying towards the player. This really pops out at the player if the 3D effect is on. Meanwhile, the music is without a doubt Paper Mario's most impressive, including tunes from past Mario titles as well as countless lovely new compositions. Sticker Star earns a gold star in this category.

While not the most perfect installment to the Paper Mario series, Paper Mario: Sticker Star manages to try something different and pretty much succeed. Some less vague puzzles and means to proceed in the game would have been very much appreciated, especially to those who don't have access to a guide or walkthrough like I did. It might become frustrating, but "stick" with Paper Mario: Sticker Star, and you will discover that there is a lot to like about this game.