Princess Peach has baby blue eyes and yellow/blonde hair. Peach is a lot taller in height in comparison to other characters. Princess Peach has a fair complexion and a pointed and defined nose. Peach has thick flowing blonde hair however is sometimes described as yellow hair. Princess peach is usually seen wearing her signature floor length pink dress with elbow length gloves. When Mario sports instalments started with Mario golf and Mario Tennis for the Nintendo 64, the sports uniform was the same as her trademark pink dress, just a bit shorter and without the gloves which were replaced by tall socks.

which consists of a crop top and shorts. In Mario and Sonic at the Olympic Winter Games Peach wears a winter outfit which include white winter gloves and boots with pink lace. The outfit itself includes long purple sleeves and pants with a white line accenting each limb. The outfit is designed like a mini-dress with one white ring at the bottom. Peach's winter outfit still includes her standard jewellery including crown.

Peach is portrayed as Mario's love interest and the frequent damsel in distress. She is also good friends with Luigi, Toad, and especially Princess Daisy. Super Mario Bros was Princess Peach's debut appearance. Bowser had invaded the Mushroom Kingdom, and transformed its inhabitants into blocks and other objects. It was known that the Mushroom King's daughter would be able to lift the spell therefore he kidnapped Princess Peach (then known as Princess Toadstool).

Mario and Luigi realised that there was a threat and went to rescue the Princess. After completing all seven castles and defeating the real Bowser, the Mario brothers finally found the princess and rescued her. As a reward Princess Toadstool gave Mario a kiss on the cheek and thanked him. In Super Mario Bros.: The Lost Levels, Princess Toadstool is kidnapped by Bowser again, and again rescued by Mario.

Princess Toadstools abilities was limited fluttering time after jumping. Princess Toadstool was the weakest character in the game with the slowest "pull time" of vegetables, and also had a poor vertical jump, but her floating ability was unlike any of the other characters.

A video from the writers of the Adventures of Super Mario Bros. 3 showing the way Princess Toadstool is meant to be portrayed as a character and the concept behind her.

King Bowser Koopa is the main enemy of Princess Peach. Bowser has kidnapped Peach numerous times, and torments her kingdom constantly. Bowser wants to win the princess heart as it has been shown that he is in love with her.

Since her debut appearance in Super Mario Bros. Princess Peach has firmly established herself as one of the stars of the Mario series and the Mario Brothers are rarely 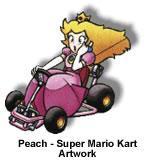 seen without her, she featured in the cartoons, and most of the main Mario adventure games, she has also had a game released in her own namesake in the form of Super Princess Peach.