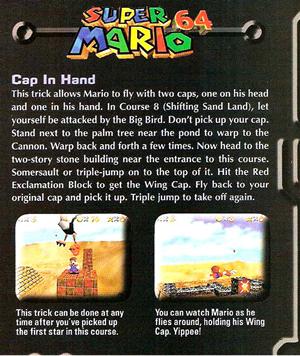 Obtain all 120 stars and return to the final fight with Bowser to see a different message.

Control ending sequence camera
After beating the game, use the Analog-stick on controller two to control the camera in the scene featuring Mario and the Princess. The camera is also controllable on the Credits screen.

One-up butterflies
Butterflies may appear on courses 2, 12, and 13. Punch the butterflies to turn them into round black bombs that will chase Mario. Then, the bombs will explode or turn into one-up mushrooms.

Unlimited lives
Go outside the castle, near the waterfall. Climb the third tree from the waterfall. Do a handstand on top of the tree to get a one-up. Then, enter the castle's first floor. Now return outside and climb the same tree. Do another handstand for another one-up. Repeat this trick to collect an unlimited amount of lives.

Very big penguin
Obtain all 120 stars and return to Course 4 (Cool, Cool Mountain). Before entering, select the Big Penguin Race. Then begin the game and jump into the chimney of the house at the beginning of the level. Now the penguin will be even larger than before.

Yoshi
Obtain all 120 stars and go outside the castle. Climb inside the cannon opening that is now located where the grating was near the Fish Pond. Aim to land Mario onto the roof, where he will meet Yoshi. Then, he will speak to Mario, award a 100 life bonus and a triple-jump move, and quickly leave.

If you know about any cheats we don't have, or you have some tips not listed below please let us know and we will add them, crediting the submitter.